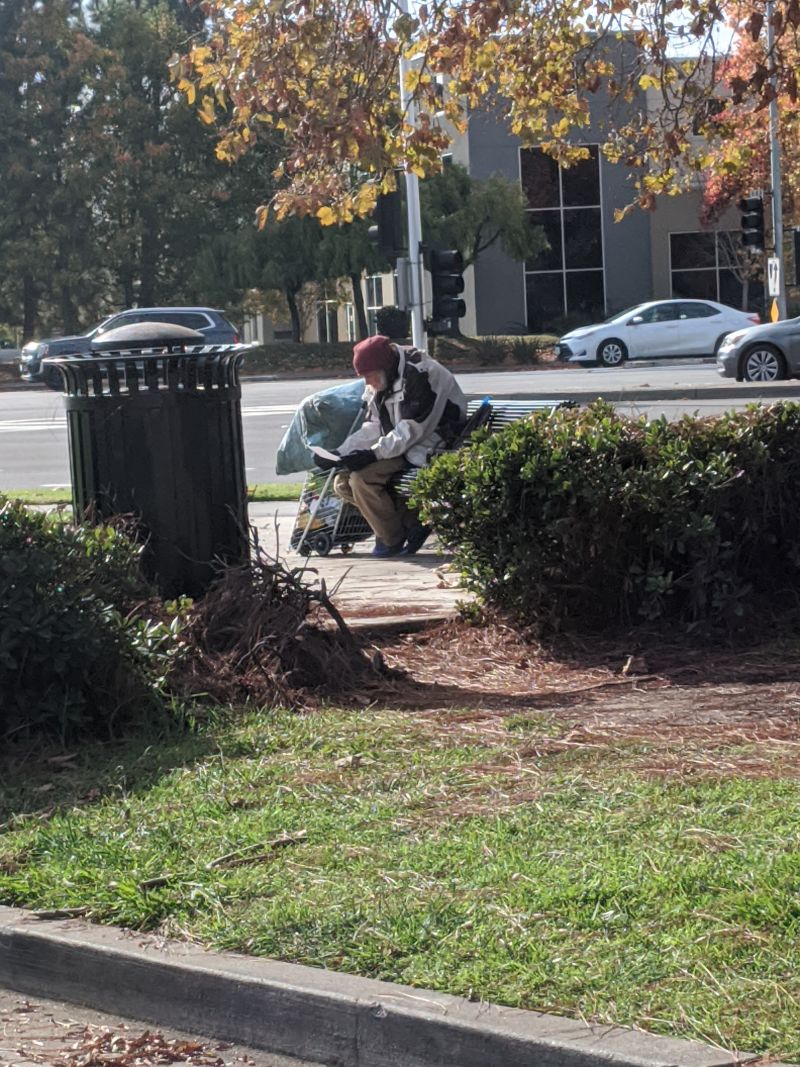 At the Awakin Circle last night, someone spoke of their equating of ignorance and innocence. Today, that hit me in a profound way.

Above is a picture of Andy. I had made some cinnamon rolls this morning, as well as a potato dish, with the intention of offering it to anyone experiencing homelessness during this time. Andy was the first person that I met. I sat down with him and just listened as he told me his story, which included his mother and brother passing away; how his sister Susan had arranged for him to live in a trailer and how he left it, which made her none too happy. He just couldn't afford it anymore, though.

I decided to ask Andy if he'd like me to help find his sister. He said he's tried but has been unsuccessful and hasn't seen her in a few years. After giving me her name and her son's name, so that I'd know I had the right one, I headed off. A few minutes on the computer at home and I had found her...Susan had passed away December 29, 2017.

The immediate thought that came to me was that I had to tell him ... and it had to be today, as I may never again know where he'll be staying...living on the streets means keeping on the move so as to not be harassed by the authorities.

But then I was reminded that it's Thanksgiving. If I didn't tell Andy, he'd remain ignorant of his loss...innocent, if you will. Telling him would steal that from him. I thought to myself, I'd certainly want to know. And then other thoughts arose; how does one find themselves so disconnected that a sibling passes away and they don't even know, as they spend the holidays in homelessness, or even hopelessness. I don't blame Andy at all. It's not even about fault, really.

Anyway, I printed up the story of Susan's death and went to see Andy. When I began to tell him he sensed it was bad news. I first told him and then gave him the printout. Susan was 69 when she died; Andy just turned 69 a few weeks ago. He said his mother died when she was around that age, too. Andy began to think of his own mortality. I told him about my mom passing away just over a week ago. I just rested my hand on his shoulder and asked him if there was anything I could do for him. "No," he replied And then he thanked me for letting him know, saying, "it's better to know than not." Andy made it clear ignorance is not a choice he's going to make. That was definitely taken from him.

As I drove away in the car I looked back at Andy. He was unfolding the paper of Susan's death and he began to read it again. I stopped and just watched him for a second. As I snapped this photo, I still sensed an innocence in him, though. I don't know if I'll ever see Andy again. Regardless, the relationship and memories that were developed on this Thanksgiving Day 2019 will remain with me until I find my new address...and maybe beyond.