Alissa Hauser, a long time friend of ServiceSpace and visionary behind the conference, was very committed to bringing the SSp values of kindness to the whole conference. I helped organize, Tejas took photos, Rahul hosted a workshop, Nipun did the opening keynote, and our local crew of volunteers (Tess, Nilam Aunty and Roshni) stepped up the kindness throughout the few days ... 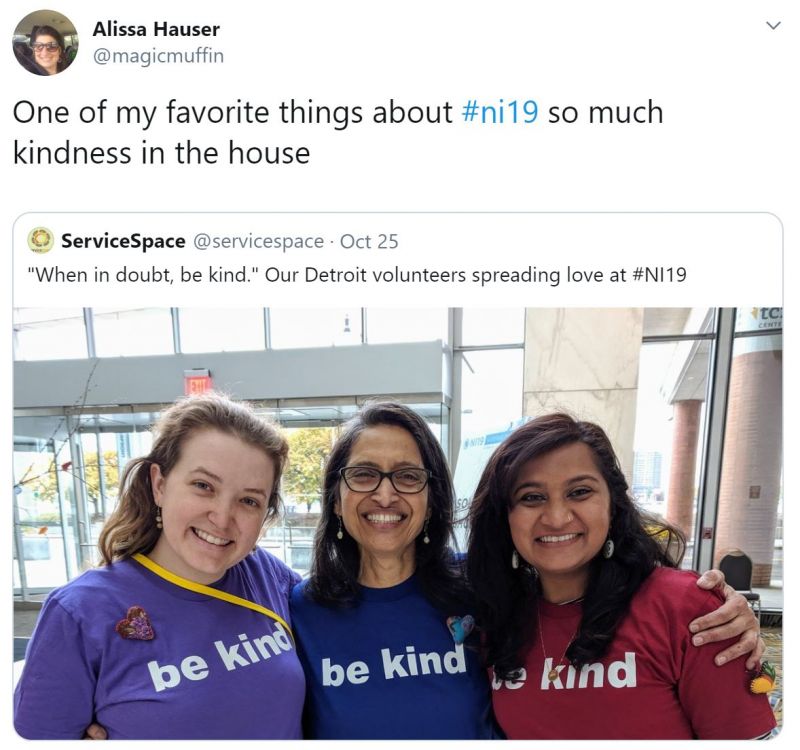 On our kindness table were Smile Cards and Decks, a laptop with KindSpring website, hand-made (by Nilam Aunty and friends!) ceramic pieces with positive messages, flowers that people could pay forward to others, 21-day challenge diaries, Hershey's hugs and other chocolates with smiley stickers, a gratitude tree where people could come back after doing acts of kindness and hang their reflections, a free hugs corner and so much more like flower mandalas on the ground. Nipun had prepped the whole crowd, and Alissa had created a scavenger hunt that included a stop at the kindness table. It was so beautiful to see all this in action ... oh, and those t-shirts were over-nighted by Bonnie and Annette all the way from LA! And the table quickly became the most popular stop. One student came up and said, "I've heard you guys give amazing hugs, so I just wanted to feel the connection and receive a hug!" Ten army cadets even came together, and Janet and Nilam Aunty did a group hug with them! (Photo coming soon.)

All this was only possible because of Awakin community that Nilam Aunty and Bharat Uncle have created. They started by hosting an Awakin Circle, which for six months only had two of them as attendees. Then, Trevor, Dante (also in the photo below) and a couple others joined. And now, eight years later, it's a thriving community that supports each other in all kind of ways. Janet (also in the photo below) recently setup a raised-bed garden so the Awakin food can be made with more hand-grown items. 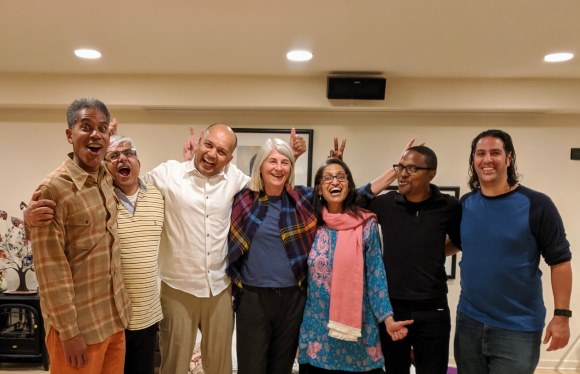 And Detroit has been through so much, recovering from being a "ghost town". Dante just moved in this community, where this house was sold for just a dollar: 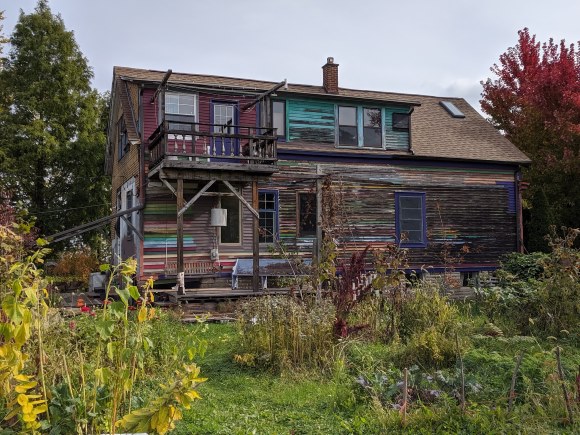 Yet there is so much resiliency, as depicted by all kinds of graffiti around town: 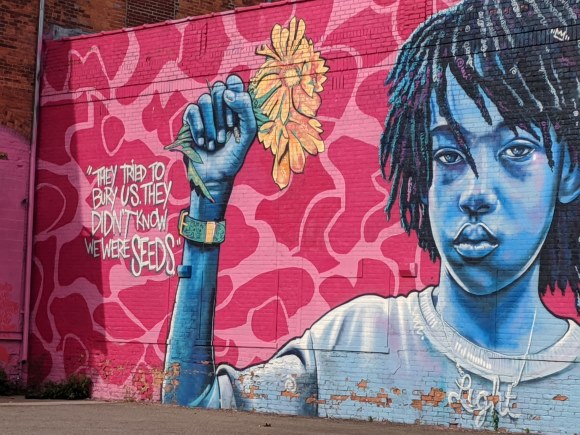 The Provost of Wayne State was one of the speakers who shared how they are now offering free college tuition to incoming Detroit locals. After hearing about ServiceSpace design principles, he's been in touch about exploring a more multi dimensional framework with alternate forms of capitals, and particularly exploring an ethic of service and generosity in the local ecosystem.

We also continue to hear the stories from participants who carried Smile Cards back home ... like Jessica in Windsor:

On my back, I ended up paying for the bus fare of a traveller who didn't have a ticket or the right change on my way home from Detroit. At first, this traveler handed my money back to me, unwilling to accept it. When she finally took it she was then committed to trying to find a way to send me the money via Paypal or some other means. She finally accepted after I told her a bit about paying it forward and that I really wanted to do that act of kindness.

Minutes later, two other women got on the bus who also didn't have tickets or exact change (it's the bus from Detroit to Windsor and you can only buy the tickets in Windsor and they don't carry change!). By then I was out of cash, but another man on the bus who had over heard my previous interaction (but hadn't offered to help the first time around) stepped up and made sure that these two women could get on the bus too.

This then sparked a conversation between almost everyone on the bus (including the driver shouting from the front)! It was a beautiful interaction among strangers that I'm guessing would have never happened otherwise.


And I have to say this -- even though I've witnessed and experienced the love and kindness of the ServiceSpace ecosystem for so many years now, I was still blown away by Nipun's talk, the commitment of the local volunteer crew, and collective power of ServiceSpace values when they are embodied so deeply. Thank you.

Smiles From 27 Members Login to Add a Smile