Inspired after visiting Awakin Santa Clara and Harshida's veggie garden, I thought it'd be great to start a garden of my own.

It was hard to follow-through on that though, as summers are so short and so busy. Over the last two years, I kept talking about my wish to make a garden in the company of my Awakin Circle family. Janet, who has been attending the circles for almost 4 years, surprised me by showing up at my door step with garden soil, wooden planks along with tomato, beans, cucumber, and pepper plants! She said she wanted to do something special for our Awakin family, and the veggie garden was her gift. I was so overwhelmed by her thoughtfulness and love. I kept saying, "no" and offering to reimburse her for the costs -- it’s so hard to receive. :)

She refused to take money and said “You do so much, please don’t say no for a small offering from me." I was so emotional to see love and gratitude in her eyes.

We planted two planter boxes, and have been watering and nurturing the plants. Seeing the mature veggies -- and cooking them in the Awakin Circle dinners! -- has made my wish come true because of Janet’s gift. The veggies are so much in abundance that I’m offering them to all my Awakin family and all people around me, so I even have the gift of sharing Janet's gift! 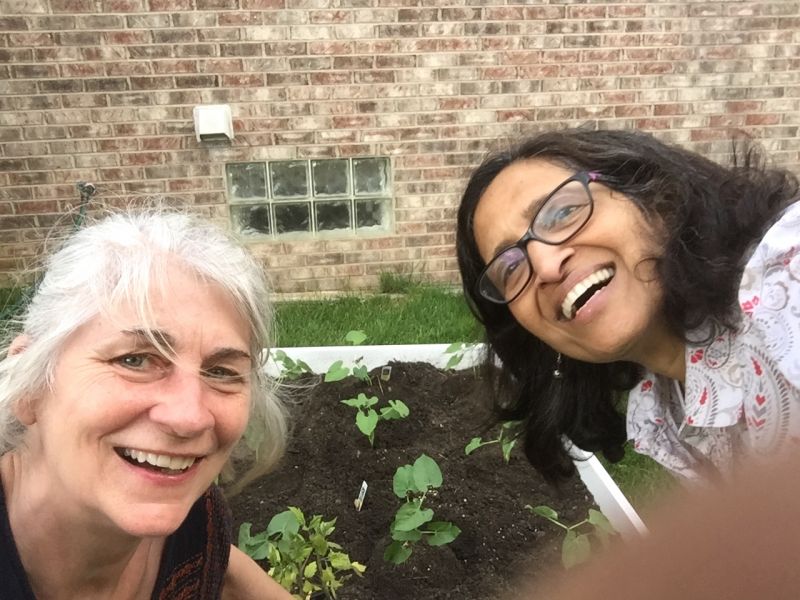 On top of that, I visited my grown son on the other side of the country two weeks back. He moved there not too long ago, and is very much settled in now and is comfortable where he lives. I knew he enjoyed the Awakin Circles whenever he visited us, but I was not ready and was astonished when he said he wanted start Wednesday Awakin Circles and invite friends over and start a community!

I don’t know where it’s going go, but the seeds have been planted deeper in his heart and whenever it grows it will be a good beginning for him. I did not push him to get involved in these ways, but he is just ready to grow on his own.

So grateful for this ecosystem, that has ignited this experience of gardening -- literally and metaphorically! It is a real gift to watch seeds ripen, bloom, and offer nutrients to those around them. All at the pace of nature. :)