“The soul of India lives in its villages” – some of us experienced it in our “Samagrata retreat” village immersion in Punadara and Waghjipura. 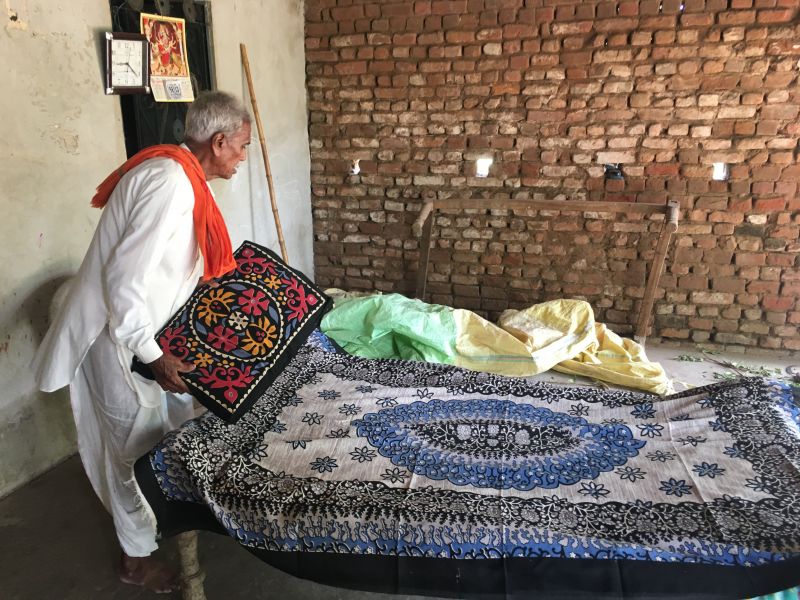 As he arrived home, witnessing two of us sitting casually, he immediately got in action – arranged two Chaarpais, with beds, bedsheets and pillows offering his whole presence in truest spirit of Aatithya (hospitality). Not knowing who he was, I guessed it must be Jyotsana’s father, soon I learnt that he is her grandfather and is 85 years. I was in awe and jaw struck knowing his soulful spirit. Jyotsana, stayed and studied two years’ teacher training in Gandhi Ashram, is eldest daughter in a joint family and has 7 sisters, she cooked herself and offered us lunch in her humble home. I will never forget the taste of curry she made! On asking what she remembers about the time she spent at Ashram during her study, her response was collective living in Somnath Chatrayala (hostel), historical building at Sabarmati Gandhi Ashram, and that values she cultivated and knowledge she gained there, she is sharing with her siblings and children in village.

We were dropped to her home in an auto by Zakir bhai, who is father of two children, Simran being elder daughter. Knowing he has an auto, we initiated conversation of Uday Bhai, Zakir bhai opened up and share that he never charged any patient or someone who can’t afford to pay. He shared that these days he can afford to buy shoes for his children, but he wouldn’t because so many children can’t afford to buy and that he is resolved to get shoes for every child in Punadara Primary School. To assist his intentions, 7 of his friends joined him. I bowed down internally to his compassion and generosity. I saw Simran and waived at her, she wasn’t wearing any footwear like any other kid in school, Zakir shared- he is yet to procure shoes for all the children as collation of data of every child is in process. I bowed down again to his patience.

Samagratha meaning holistic as I learnt, a pilgrim as I heard, with a Sangha as I was told , and a bliss as I experienced. The yatra invited us to be in the shoes of an observer, to welcome each situation as a junction to learn, to immerse and yet just see what happens within and without- in this subtility emerged the meaning of pilgrim for me. Arti, one of the co-yatri (of 10 of us), shared - my heart still feels graced with the seeds sown by several day to day heroes, and the collective intention of several legends , the ESI team, ,Jayesh Bhai, Pankaj Bhai and his family, the sarpanch (village head), to the innumerable energies sharing their right intention, channeling to this profound creation : Village.

" Jitna Kam is 2 saal me hua hai utna saalo me nahi hua (Pankaj accomplished work in two years what couldn’t happen in two decades) " Quted by one of the villager. Pankaj is living in Punadara village for last few years and is operating as a catalyst with his wife Kamini and daughter Khushi (that means happiness). His and ESI's presence in the village and their labor of love has now penetrated to the veins of this village - beyond commendable , actually inspiring. "How can I serve them better " is the anthem Pankaj Bhai beholds. It left me to reflect what holds me to surrender to service in my life?
Inspired by Pankaj and his journey, Anil moved to Waghjipura village and in our interactions he shared that he is inspired and more confident to be the change.


We also visited primary school in Waghjipura where during summer 25 students from CEPT did labor of love and supported by ESI and Noha, a French Architect designed a ecosan- toilet, its structure is largely made of bamboos designed to last for decades. Inspired by this toilet, district collector requested to replicate ecosan toilet in five more schools. School principal inspired many of us with his small experiments. Shailesh, one of the yatri was very happy to see that girl’s attendance was more in the school than boys and to celebrate Principal had a special flag of the day. Principal also invited to plant few trees, while mostly were busy in digging pits and planting new trees, Kushal (a student of school) along with Arti and Shwetambari found a struggling tree (already planted) and they ensured its well –being by replenishing it. Later Shwetambari reflected that every year she plants a tree on her birthday but she rarely goes back and check how the tree is doing, Kushal brought out the care post plantation to her and she is grateful. 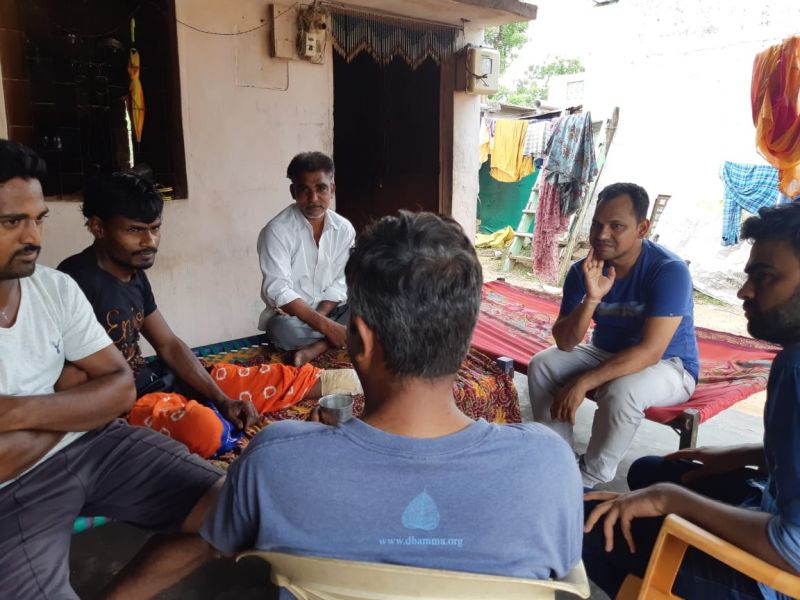 Pankaj arranged a meeting with village leaders, elders, youth and children of Waghjipura village. We met a lawyer turned social worker (80+ years), he is inspired by Aurobindo and spends a month in Pondichery every year. He shared that during his law practice, his father asked for a promise to not to charge any individual of his village for any case, and throughout his life he lived with the promise.
We met an young villager who met an accident a month back and was bedridden. He reflected that had he didn't have a toilet in his home (thanks to Pankaj and ESI) he would have faced immense issues. He will be on bed for another month until his leg recovers. He reflected that now he realizes how difficult it could be for elders and women to not to have toilets at home. He made a point that he will speak up in village gathering and appeal to all who dont have toilet even now and will appreciate Pankaj and his efforts.


Later, we went for a forest walk facilitated by Bhaskar, with his love for nature, birds, animals and insects – he brought incredible attention to simple details that would be unnoticed by many of us, had we were on our own. 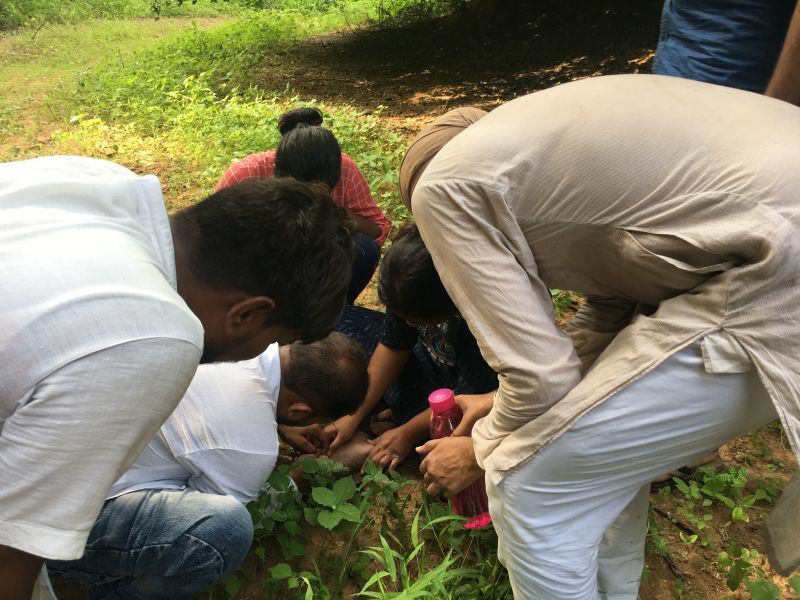 On the walk, Pamal’s (a student in NID) feet got hurt by a throne. Indeed his hands reached his leg, there were many others as well. Recalling Jayesh bhai who often shares – if foot is hurt, hands reach out naturally to support (harmony of body). We witnessed an application of the same and beyond as in this case, many hands came to support. 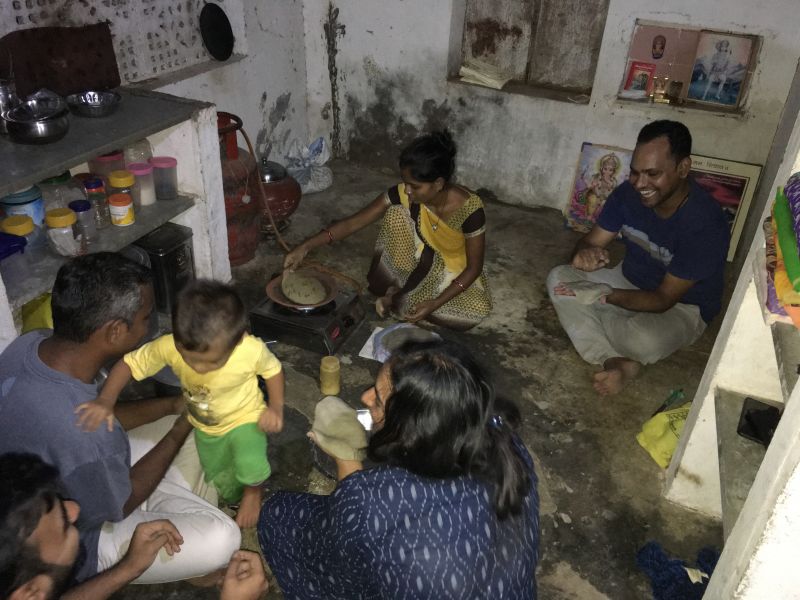 Evening of day 1, was spent at Pankaj’ home and few of us decided to cook for all and our host including Sarpanch (head of village). After a sumptuous meal, we all decided to sleep under the open sky. I recalled a chapter I read in my primary schooling - “Aakash Darshan (to witness the sky)” by Gandhiji, where he mentions how every night the sight in the sky changes, different stars, positions of moon, galaxies, clouds etc. And we had an opportunity to be a witness of the wide open screen in the sky. We also remembered Gopal dada in the day – that when he would sing, rain would come. That night we had two brief drizzles, and both the times, Gopal dada’s presence came alive.

Next day morning, Pankaj lead us in a Prabhat Pheri (morning collective chanting) across the village. We sang, danced and cherished the fresh breeze, chirping, mooing (of cows and buffaloes) and sounds of our footsteps. Bhaskar and Shailesh, made most amazing breakfast for all of us from previous night’s left over khichadi.
We spent next few hours in households of villager, that’s where we met Zakir bhai, Jyotsana, Dada and many others. Atul took this opportunity to revisit his host family where two years back during his Teach for India retreat, he spent a day with them. His joy was spellbound when he learnt that Mumtaz, decided to continue her education and that his family is also supporting it. Two years back, they were reluctant and possibly his conviction and connection lead to Mumtaz’ further education.

Pamal was hosted by a family that offered him most sumptuous meal and experience. He comes from a small village from Panjab and shared that there are so many similarities and differences in cultures of villages, one of the aspect he witnessed and felt joyous that there were no concrete walls/boundaries between homes and farms in Punadara village – all interlinked and accessible by anyone. 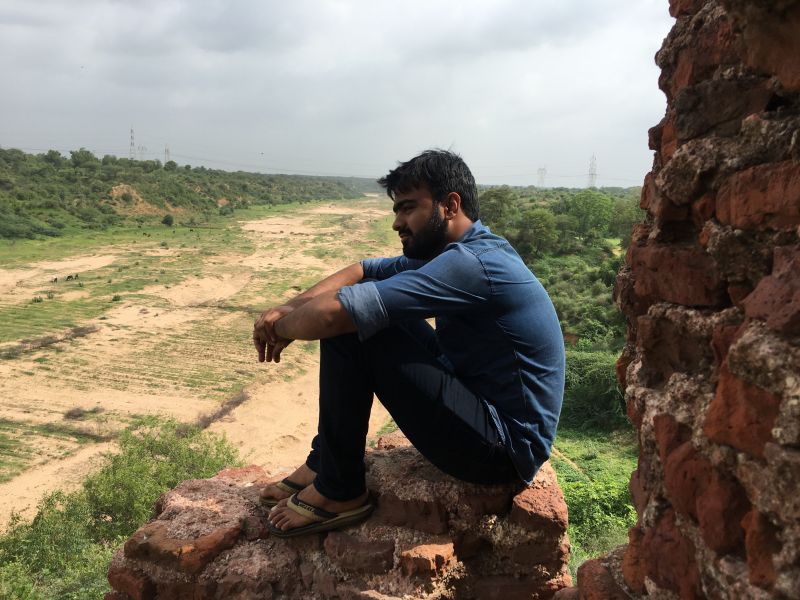 Darpan reflected that he wanted time for personal reflection, even we all were part of the group and met hundreds of people, he felt deeply connected with self. He shared, for me these 2 days there was a lot of internal processing happening and every moment in the village and people over there helped me in so many ways. I took some real important decisions for my life in these days.

Dipti was deeply inspired by the collective space that was held together. She had read about villages but it was her first deeper dive to understand what a village life would look like and the cultural richness.
Arti further reflected - In its near perfection, lied some observations which pained my heart. Traces of plastic in the fields of the farmer, the dried river and some unpleasant social constructs. It pained to see the traces of ugliness of urbanization being penetrated in the village, and the inheritance of the social divisions layered in the power games. It definitely alerted me to see my own life, the choices I make, the ripples it creates and the consequences my actions lead to. And we echoed with her observations. 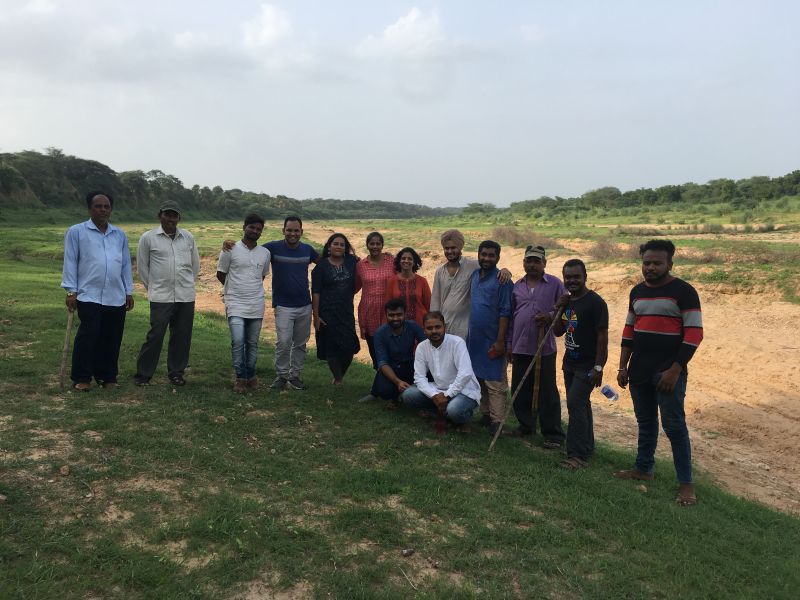 One key reflection I carried back, had I was a lone pilgrim/ traveler, I would have witnessed the village with only two eyes with my limited reach. Since, 10 of us were in it together, right from the beginning with intentions of “ Paraspar Devo Bhava” – (to see and be divine in each other), through our collective reflection circles, I believe I witnessed village through 20 eyes. My understanding about “Samagrata” – totality enhanced deeply.

Aug 04: riya roy on 'Our Weekly Call On Simplicity -- With Duane!': "If you're searching best technology, don’t go...

Aug 02: Esha on 'On Vivekananda, Tracelessness, Work, And Impurity': "Wow! This passage from 'Karma Yoga' resonates...