I was in Tagore's heartland last weekend on my second visit to Shantiniketan (translates to "Abode of Peace"). This is where Tagore setup an international university called Vishva Bharati (which translates to "Global India") in 1921 using his Nobel prize money received in 1913.

There are many things of note here. Tagore rebelled against education that was confined within walls. A hallmark of the classes here is that they are often held in open air under the trees. Tagore and Gandhi both had a low opinion about the British model of education that arose from industrialization and employed a factory and batching model.

Santinketan has given India two of its Nobel laureates -- Tagore for Literature in 1913 and Amartya Sen for Economics in 1998. Here is Sen reminiscing on what education was like here in his formative years:

.. it was mainly in Tagore’s school that my educational attitudes were formed. This was a co-educational school, with many progressive features. The emphasis was on fostering curiosity rather than competitive excellence, and any kind of interest in examination performance and grades was severely discouraged. (“She is quite a serious thinker,” I remember one of my teachers telling me about a fellow student, “even though her grades are very good.”) Since I was, I have to confess, a reasonably good student, I had to do my best to efface that stigma.

The curriculum of the school did not neglect India’s cultural, analytical and scientific heritage, but was very involved also with the rest of the world. Indeed, it was astonishingly open to influences from all over the world, including the West, but also other non-Western cultures, such as East and South-East Asia (including China, Japan, Indonesia, Korea), West Asia, and Africa. I remember being quite struck by Rabindranath Tagore’s approach to cultural diversity in the world (well reflected in our curriculum), which he had expressed in a letter to a friend: “Whatever we understand and enjoy in human products instantly becomes ours, wherever they might have their origin… Let me feel with unalloyed gladness that all the great glories of man are mine.

That sense of cultural connection with the entire world also extends to a sense of responsibility toward the environment. I was surprised to see a peaceful march by school-going boys requesting the President of India (who is soon to visit) and the rest of the city to have a low ecological footprint. 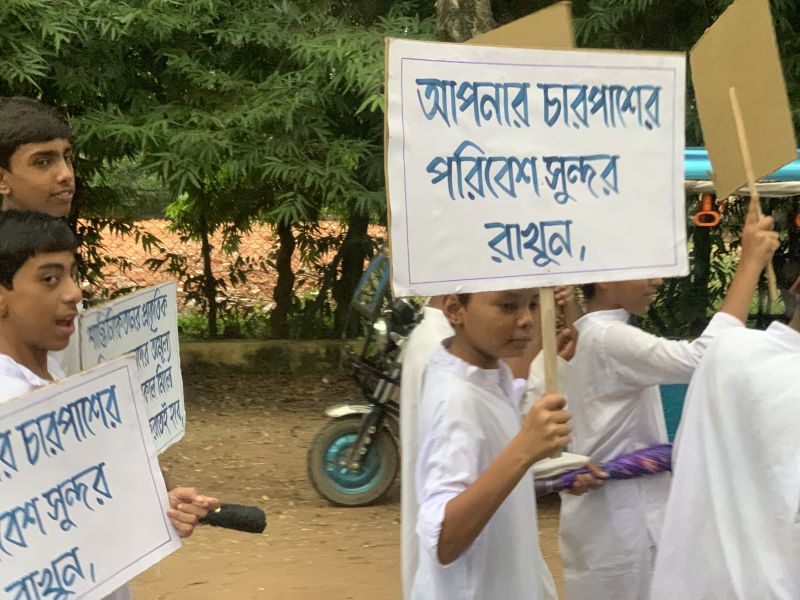 The placard above requests in Bangla, "Please keep your environment beautiful."

Environment is indeed a major character in Tagore's life and situates so much of his poetry and prose. It also situates the vibe of Santiniketan. When students graduate, they are given seven leaves (called saptaparni) from a special Chatim tree under which Rabindranath's father Devendranath meditated. Devendranath was considered a spiritual giant in his own right and one can see that Rabindranath was as much a continuation of a stream of consciousness that was in the field that contained him as he was a rebel poet to the world outside. 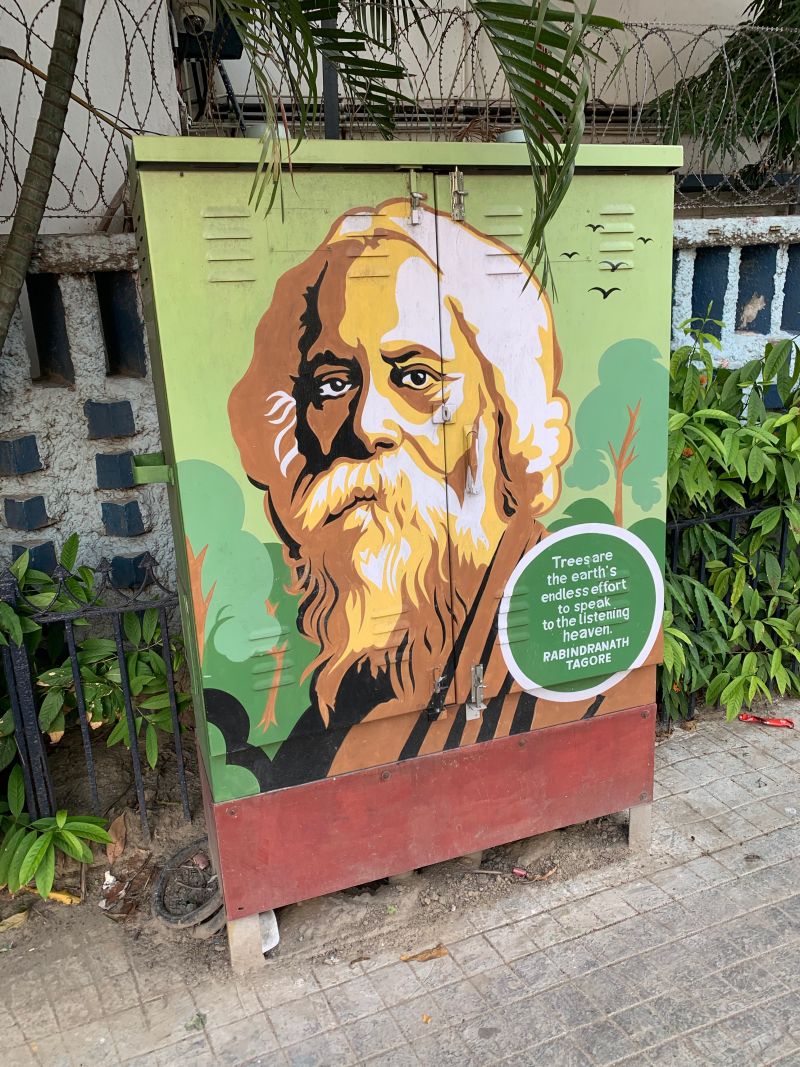 Tagore's poem makes a power box in Gariahat beautiful: "Trees are the earth's endless effort to speak to the listening heaven."

The local economy relies on art and the market (called "haat") organizes in a beautiful Shonajhuri (or the Golden Basket tree) grove selling Santal (the indigenous forest people here) and other art and singing Baul songs. The name Shonajhuri was given by Tagore who was fascinated by this beautiful tree. Its scientific name is Auri or Earleaf Acacia.

Bauls are bards who sing deeply soulful spiritual songs and wander from place to place. They are easy to interact with and very friendly. They have special names that have their own significance. The one I met had the name "Jaga Khyapa Baul" -- which literally translates to "the one who the world considers crazy." He asked me which songs I wanted to hear, and then proceeded to render with his ektara (a single stringed instrument) a Baul favorite, "Hrid majhare rakhibo", or, I will keep you (the essence of the universe) in my heart. Tagore absorbed from many traditions, and the local Baul tradition was a major influence in his life and work.

The environment is also under duress. This has been the hottest summer ever, with the rains not coming. This is culturally quite traumatic for its residents. Visitors have often come here to experience the poetic monsoon. A few years back, a large number of the famous Shonajhuri trees that lined all the roads and had taken decades to grow were cut off illegally and the wood sold off, and since then the microclimate has altered irreversibly. The government has now tried to start planting trees but we are talking about a multi-decade ecological process.

The most touching moment of the trip for me was during my visit to the Vishva Bharati museum. The first picture to greet me hit me hard. It was a painting of a deep-rooted friendship between two deep people that you will recognize. 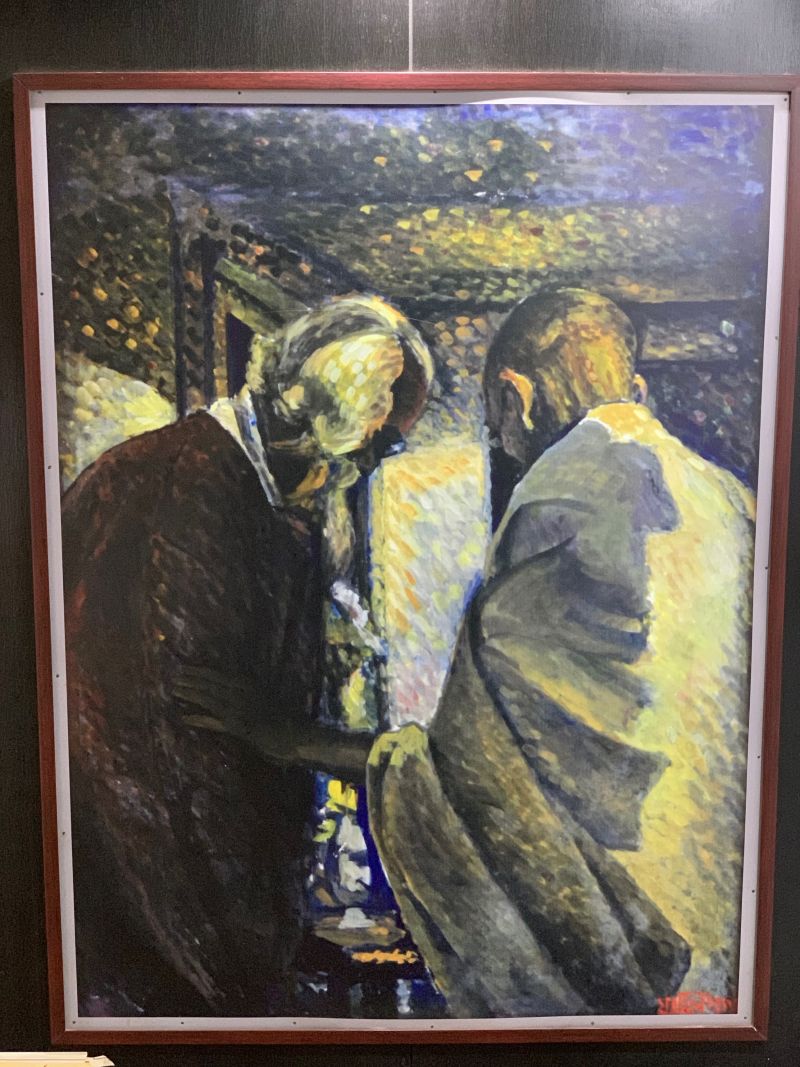 Gandhi loved Tagore and when in prison, he once asked Tagore (who was visiting) to sing to him. He connected deeply with Tagore's poetry and when he would visit Kolkata in its darkest days during the riots of 1946 and 47, he would have Tagore's poems sung in his legendary prayer-meetings and would precede the song with his own explanation of the meaning of the words to the gathering. Tagore, in turn, was the one to call Gandhi "Mahatma" or great soul, a moniker that is today synonymous with Gandhi in India. When Tagore knew he was going to pass on soon, he asked for Gandhi's commitment to continue to nurture the seeds that had been planted at Santiniketan, which Gandhi gave. He made good on that commitment. To this day, the current Prime Minister of India is the Chancellor of Vishwa Bharati and makes time for the convocation.

What touched me the most though was a particular poem that Tagore had written in his Nobel-winning work, Gitanjali. This poem was on display at the museum with a photograph of a rebel poet, Wilfred Owen, who perished in the fog of war. Deep in the trenches, he wrote a letter to his mother quoting Tagore's poem which she later sent to him. Below is a picture of Owen and the letter he sent to his mother quoting Tagore.

This poem was later selected by Tagore when his time of completion came near as the poem he held in his heart. 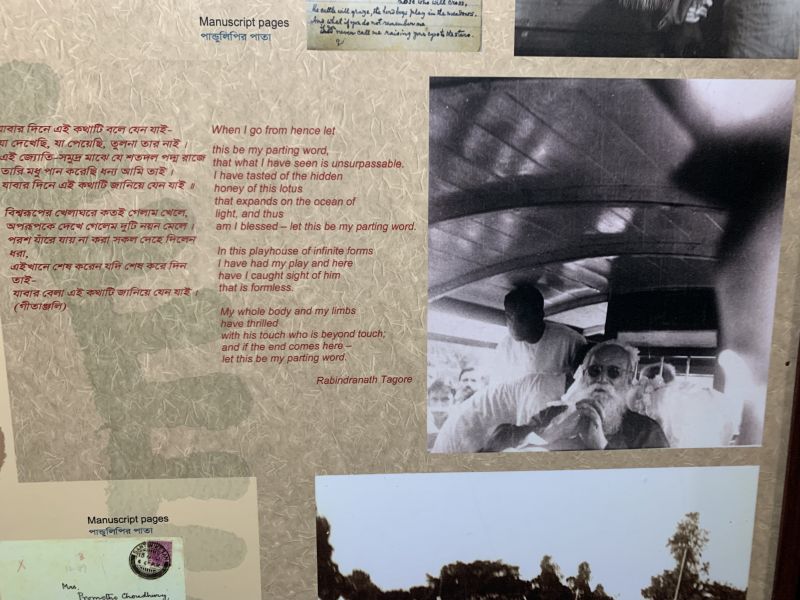 Powerful though the poem is in Tagore's own early 20th century English, and enough so that another poet would carry it when facing his own death, it is thankfully preserved in its original Bangla form. This allowed me to take the liberty to make a few small edits to adjust personal pronouns to make it consistent with the Bangla original (as in, there are no masculine pronouns for the essence of the universe in the Bangla version).

When I go from hence, let this be my parting word, that what I have seen is unsurpassable.

I have tasted of the hidden honey of this lotus that expands on the ocean of light, and thus I am blessed—let this be my parting word.

In this playhouse of infinite forms I have had my play and here have I caught sight of the formless one.

My whole body and my limbs have thrilled with the touch of the one who is beyond touch; and if the end comes here, let it come—let this be my parting word.”

Soaking in this poem fills my heart with gratitude for things that cannot be counted but truly count.