[I'm delighted to be part of a caravan of about dozen ServiceSpacers heading to the River of Hope Summit next week! Article below by Melissa Mendonca, in enjoy Magazine shares more context of this special gathering.] 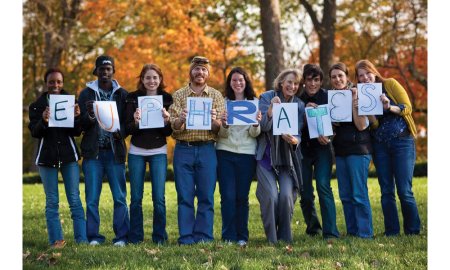 This month brings together a confluence of minds and metaphors as peace-builders from around the world, gathered by Redding’s Euphrates Institute, merge at the Sacramento River to share ideas, inspiration and best practices that will, in the words of Euphrates founder and CEO Janessa Gans Wilder, “turn the ‘other’ into a brother.”

“It’s the first time we’re all going to be all together since 2011,” Wilder says of the River of Hope Euphrates Summit which will be held March 27-29 at the McConnell Foundation’s Lema Ranch. The Euphrates Institute engages more than 30 chapters in 15 countries in grassroots peace building, and will host members from as far away as Democratic Republic of Congo, India, Pakistan, Cote d'Ivoire, Liberia and Cameroon.

“A lot of these folks who are coming have never left their home country,” says Wilder, noting that five have received scholarships to travel to Redding. “We’ve only been connecting online.” The summit will be an opportunity for “more of the outward work and processing.” Summit workshops include peace-building and social change, dialog and listening training, story-sharing and community building.

Euphrates chapters engage in the issues of their community, as determined locally. “It’s really about listening and dialog and humanizing the ‘other’,” says Wilder. “It’s really site specific but it has to do with our perspective. Who do we ‘other’ and why?”

Elesse Bafandjo, a 2019 Euphrates Institute Honoree from Democratic Republic of Congo, has been bridging divides between albinos and non-albinos, Christians and Muslims, and the hearing and deaf. Victor Garpulee, a school teacher, will share his experience facilitating 15 youth-led chapters across Liberia. Sohini Jana of the Euphrates-Kolkata chapter will share her work with interfaith dialog across South Asia, while James Offuh of Cote d’Ivoire will share his experience developing the first mediation and conflict transformation training center in Abidjan. Fuhbang Emmanuel Tanifumhas been invited to speak to his peace building work in Cameroon.

Rounding out the summit will be the River of Hope Gala at the Sheraton Hotel on March 29. The public is invited to meet the summit attendees and hear from featured speaker Nipun Mehta, the 2019 Euphrates Visionary of the Year. Mehta is the founder of ServiceSpace, an incubator of projects that work at the intersection of volunteerism, technology and the gift-economy. “I want to live simply, love purely and give fearlessly,” writes Mehta on his website.

The gala will also include dinner, choirs and global music.

Wilder says her hometown of Redding is the perfect place to host the Euphrates Institute and the River of Hope Summit, despite numerous suggestions to move to larger cities. “The beauty and solace and wisdom of nature is so helpful for this work,” she says. “I just think there’s something about this community.”

She’s acutely aware of the mutuality in bringing the world to Redding, and showing Redding to the world. “I think that the world can learn about resilience from Redding,” she says, noting that she’s also excited to “help Redding see how it is part of the world.”

Then, of course, there are the parallels of the powerful Euphrates River, where Wilder had an epiphany about peace building in 2004 while completing a 21-month stint as an intelligence officer in Fallujah, Iraq. Just as the Euphrates continued to flow through the war-torn city to provide sustenance to the desert, so too did the Sacramento River flow through Redding during the devastating Carr Fire. “The Euphrates was the river of hope for me floating through the war zone,” she says. “The Sacramento River was the river of hope during the Carr Fire.”

The Institute and Summit are all part of Wilder’s grand scheme to “bring people together to find common ground before it results in conflict and war.” Her experiences in areas of war and conflict have seeded a deep desire to address roots causes rather than troubleshoot symptoms. “As we kindle the light and inspire others, we really can change the world,” she says. “And it’s not just wishful thinking.”