The Year of the Pig is coming. Here in Vietnam we are busy getting ready: cleaning the house, decorating the altar of worshipping ancestors, cooking and travelling to be with our families. For us, ServiceSpace is a home, a family, so we travel to be with you in spirit.

After I came back from the September retreat at Banyan Grove, it was imperative that I share the experience with friends. So we all gathered at a beautiful eco resort near a national park. Almost all friends who were with Nipun in the May retreat in Vietnam came for the gathering. Some of us are “back-to the farm” and laddering the natural farming movement. Some of us work with youth. Some of us are full time volunteers who are engaged in local initiatives. 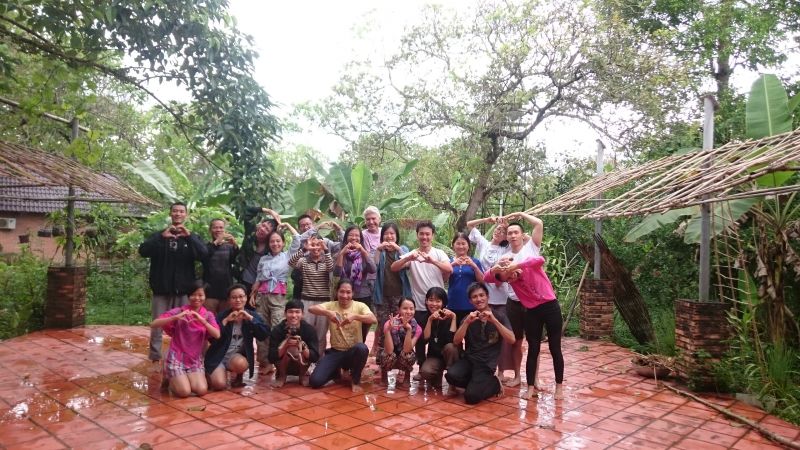 I talked non-stop for almost 2 days (there was so much to tell about the retreat at Banyan Grove). Thanks to Audrey who sent the recordings and thanks to friends who put the slides online, I could present ServiceSpace values, the big picture of our global family and lots of stories about friends who were at the Banyan Grove retreat. The captured audience was silent (this is very unusual with this group!!!). We felt something sacred. We met many times before, discussing projects, ideas and plans, etc, and we felt connected to each other. But this time it was different. We felt connected to something higher. Even though individually each of us had spiritual practices, but collectively we couldn’t make the link between spirituality and what we do. Somehow Giftivism merged the flows of inner and outer journeys.

So now, few months after the retreat, friends kept sharing how they started the dance. The owner of the eco resort has experimented with Karma-Homestay since January 1. Guests who stay there would pay-forward instead of business as usual. A group in Ho Chi Minh city started “pay-it-forward” counseling for families and youth. In Hue and Hoi An, two other groups are preparing for Karma-Homestay, which they plan to start in the summer. Our University without Walls had the first “pay-it-forward” trial in November and it was a huge success. More than 50 people contributed different forms of capital. So yes, we will organize another one later this year. Vietnam now has 3 Awakin Circles: one in Hue and 2 in Hoi An.

It feels like a garden is blossoming. The magic is that an invisible link of heart-to-heart is formed, in Vietnam, as well as with you all around the world (many our Vietnamese friends know about ServiceSpace’s friends), and possibly beyond.