A baby takes nine months, from conception to birth. How many months of gestation does it take for a Families Retreat? 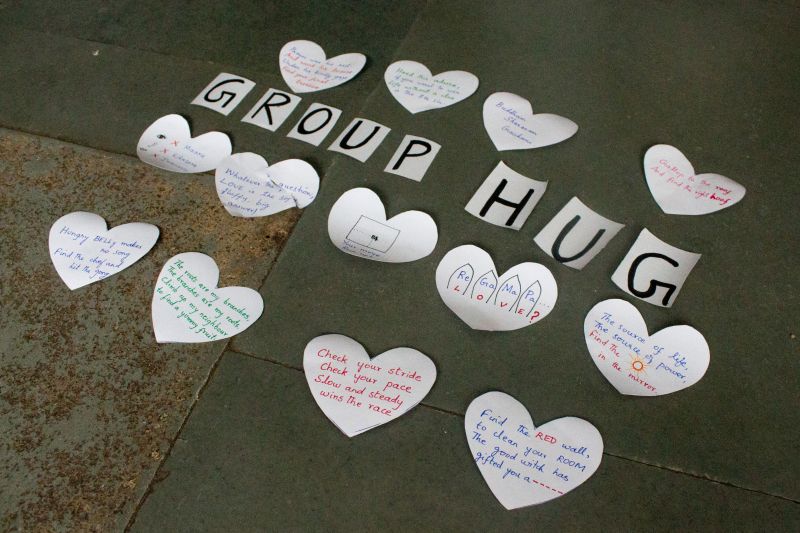 You could say it started when the early ServiceSpace volunteers first became parents. You could date it to when the Cubs newsletter came out (remember that?:) It could be when the original Awakin Circle Mehta household started the original Awakin Kids gathering, or when it started being held regularly in west India, or Parenting Circles in South India. Or it could be when the first conversations about this retreat started…two years ago. 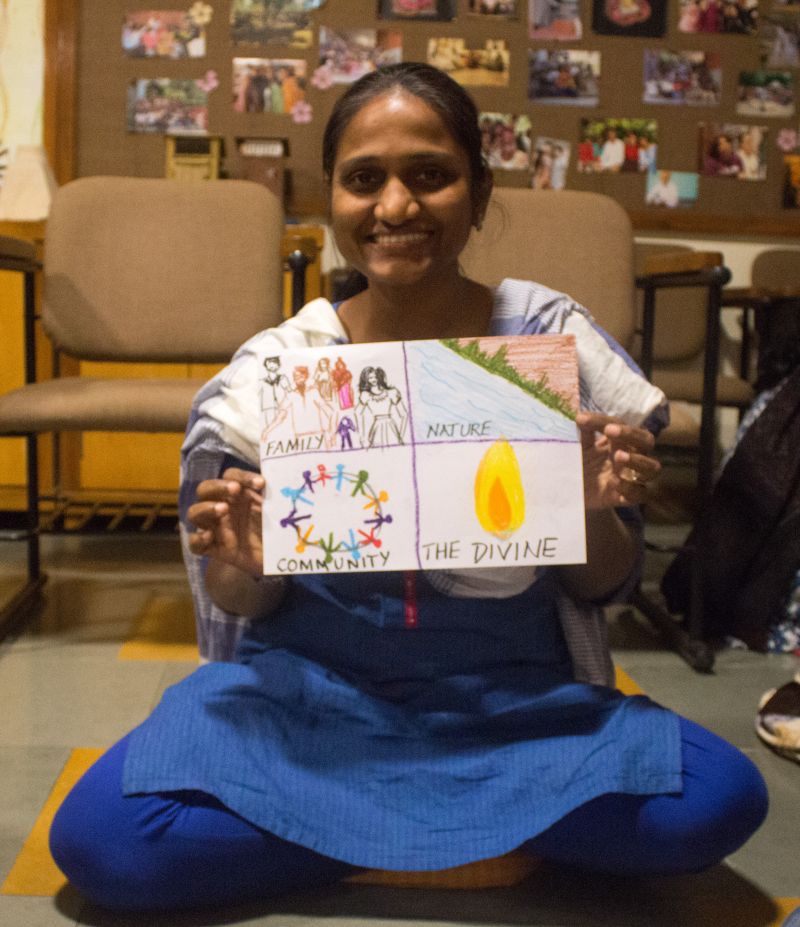 Whichever way you count it, one thing is clear…the kids are here and they aren’t leaving anytime soon! :)

Where Does It Come From?

The families are gathered from diverse cities: Ahmedabad, Baroda, Coimbatore, Hyderabad, London and Surat. Their experiences of their own childhoods and what they have learnt from their children equally so.

“Satya and Ahimsa, are two words that my parents practised and brought me up by,” says Deven.

“My children are like holding up a mirror to me. I need to be and feel what they see, and they show me who I really am,” says Trishna.
Amisha spoke about growing up in a very orthodox family, and yet being given so much freedom by her parents. The same freedom she tries to give her children.

From her parents, Shaalini silently learnt the faith in a higher power. Her small example, illustrates beautifully the link from our parents to us, to our children. “When Simran, was around 5, she heard her first ambulance. She asked what it was. Instead of telling her it was someone ill rushing to the hospital, I told her it is someone’s father or brother or sister or aunt in there. Having imbibed the faith in a higher power from my parents, I suggested to Simran that we say a silent prayer for the person in the ambulance. We began to do that regularly. At some point she stopped, but I still do it every time I see or hear an ambulance rushing by…”

Where Does It Go?

The children have become fast friends. In typical kid-fashion, in less than a day, there have been fights, falls, tears and much laughter and playing. An instant family. It warms the heart no end to see it – this moving gang of children from Drashti at 14 all the way to young Vidhaan at 1.5. They have come to ESI and made it theirs.

As part of the Opening Circle the children were asked for examples of kindness that they had recently given or received.

Ariana (5) shared her colour pens with friends. Sareena (9) let a hungry classmate go ahead of her in the school lunch line. Farhat (11) slipped and fell and was helped by an aunt. Aum (12) helped his mother cover some homeless people who were sleeping on the side of the road with blankets. Simran got trapped in a tree house and Reva went for help. The examples went on…So many acts of kindness, and all done so recently. It makes the parents fill with pride, but also realise at some level, that these kids are something else…they don’t belong to us, we are lucky to have them in our lives for a little bit.

How do parents do the following? Manish gives a moving example of an encounter with his parents that his children witnessed, and how he taught them by real-life examples. Deep talked about physical and intellectual curiousity. Of how we cannot wish for, or force curiousity on a child. We need to give attention and wait for the moments to arise.

Raghu gave an example of when Aum was younger, Ragu would not answer questions but instead make Aum write his questions on the top of a blank page and then figure out and write in the answers over time. Krishna spoke about how his very mischievous son learnt stillness and patience from drawing. 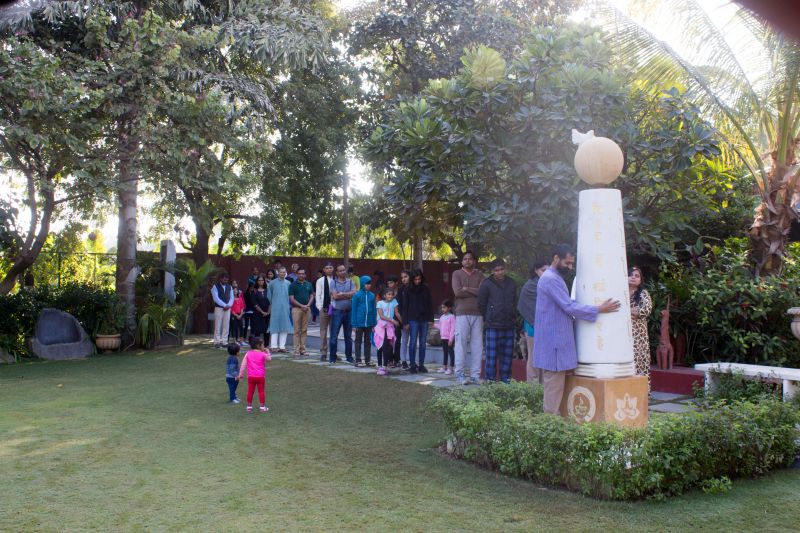 ‘Challenge’ could be a substitute word (among many!) for ‘parent’. If you are environmentally conscious what do you do with birthday-parties and other people’s weddings awash in plastic? If time is at a crunch, how do you ensure that your daughter gets enough of it? How do you sync up your patterns of life (emails, working with screens, being on the phone), with what your children are asking for? Two parents speak openly and movingly about their children going through bullying and social exclusion – painful experiences not just for the child, but for the parents whose first, completely built-in, irrational instinct might be to protect and react. But they were also lessons in these examples, of how to intervene, how to derive strength from others, how to navigate it all.

Here are some phrases that stood out for their insight:

Kishan: “The importance of community and trust, and sense of inter-being”
Balaji: “Peace is not the absence of many things, it is the presence of something.”
Samiksha: “Without realising, I‘ve just been following my parents.”
Meghna: “If something does not deepen my connection with my daughter, I will pass that opportunity. I navigate my day and life based on what is the truth in that moment.”
Abid: “If people come together, they can do wonders.”
Meera: Our son learnt emotions through observation. As much as I change, he does.”
Rishabh: “My son shows on his face, what I cannot or am not able to.”
Fatima: “Like babies have spit-up, teenagers have it too; only its words. We have to just listen, despite all their judgements.”

Who is with the kids when the parents are holding their serious discussions? The Didi-Bhaiya Gang, of course!! Bhaavya, Varsha, Jatin, Jai, Chirag, Samiksha, Avni and Vinit – we parents could not have found a better group of young people to trust our children with.
What’s both interesting and hilarious is that pretty much all of them have little to no experience with kids – of these ages, and in these numbers. And they dove right in! From singing with them, doing a painting session, to planning, choreographing and anchoring an entire evening ‘Talent Show’ at Seva Café, they did it all. 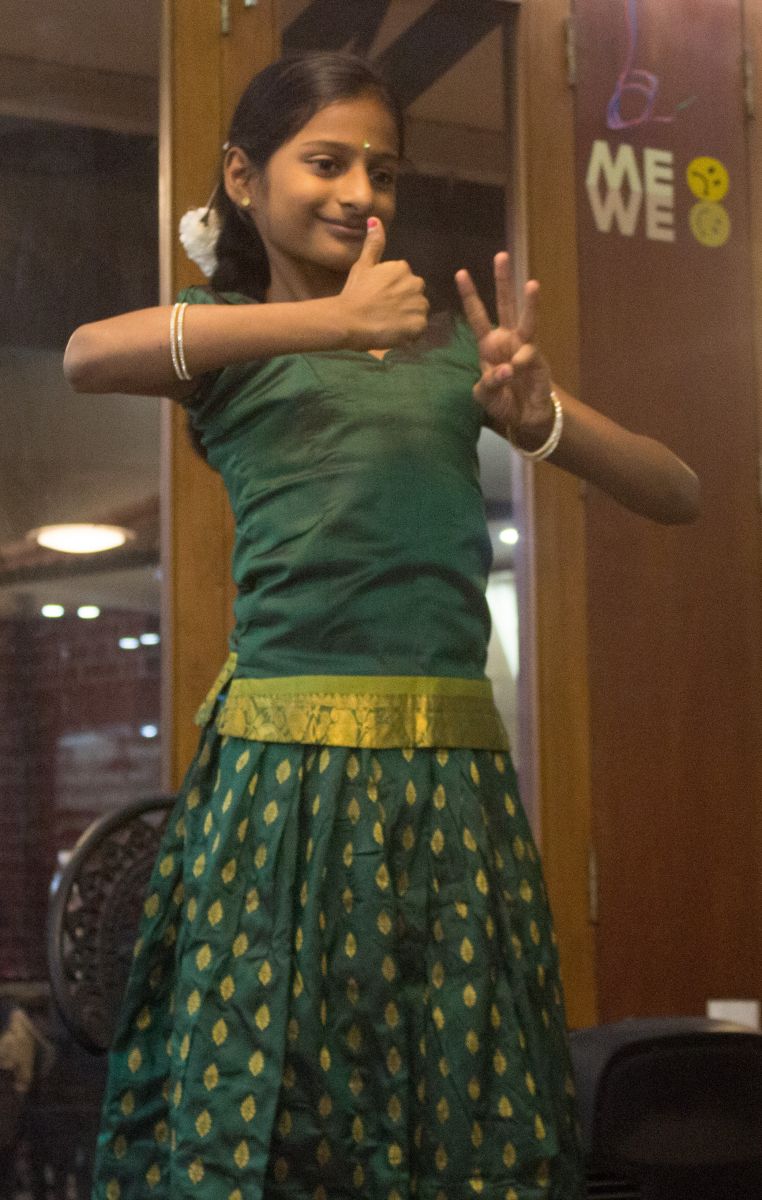 The talent show was such fun and so moving – the Didi Bhaiya Gang managed to get every single child to perform, including the super shy ones. At the end of the night, the entire group – parents, kids, volunteers, all came together in one big dance party. :) 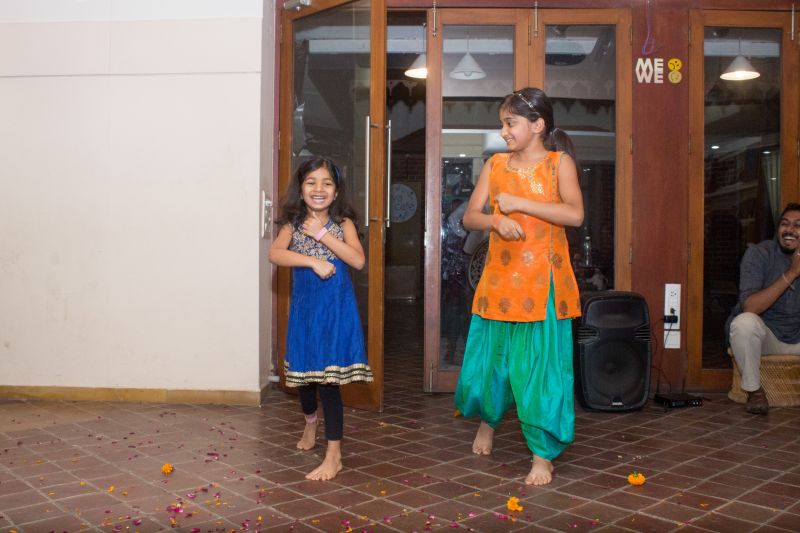 Day 1 of the Retreat is done but so much more to come…
*
ps. This blog is hastily written, in a ‘reporting live’ kind of way; dedicated especially to all those families who dearly wanted to, but couldn’t make it.
[And here is Day 2]