Last month, hours before our third Karma Kitchen in Austria, Hermann, Nipun and I crossed the border into Hungary.

It is a must-visit place for everyone in ServiceSpace. 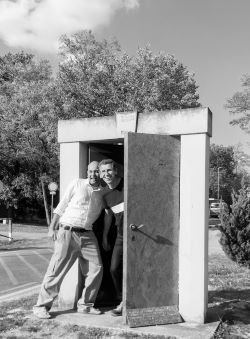 Everyone knows about the demise of the Berlin Wall, but what most people don't know is the "friendship picnic" on the Austria-Hungary border on August 19, 1989 was the actual seed of that revolution. On that day in August, over 900 Germans in Hungary came together for a picnic on the Austrian border. Few gutsy ones among them decided to cross the border through the barbed wire, then a few more. An army man on a tower had authority to shoot, but he miraculously turned around and looked the other way. Soon hundreds crossed, creating a tidal wave across the continent. A few months later, the Berlin Wall fell -- almost overnight.

The ultimate ripple effect, because of a few love warriors and one army man who looked in the direction of oneness.

As three of us crossed the border, on this sunny day, we saw the watchtower and a memorial with photos from 1989.

A physical barrier of a border was dismantled. Still, removing the mental barriers will take time. In 2014, we hosted the first TedXPannonia on a boat. We started in Austria, and by the end of the night, we effortlessly glided into Hungary. People were in tears. All boundaries are just man-made. In the eyes of life, we are all ONE.

I'm so inspired by small acts of kindness, even if its impact is immeasurable. It shifts something in our collective consciousness, and then all of a sudden, it opens the door -- for someone else, some dreamer, somewhere else in existence who has the courage to think the impossible, to dissolve the border, and call out our innate oneness. That's how history is made.

Thank you, all, again and again and again. Since the first moment I came in contact with ServiceSpace, I've felt an unexplainable affinity. Just in the last two years, after two memorable visits to India and three of Nipun's visits to Austria, I've observed the emergence with a keen eye. And my gratitude gets deeper and deeper, as I see the ripples are growing and growing.

Last week, Thomas Franz Riegler -- a past diner at Karma Kitchen Vienna -- had his Cabaret Premiere in Vienna and told the audience about his experience of paying for coffee for a stranger and invited everyone to do an act of kindness.

It may look small in the beginning, but that's how friendship picnics begin. Trust in the flow. Big hug from Dreamicon Valley. 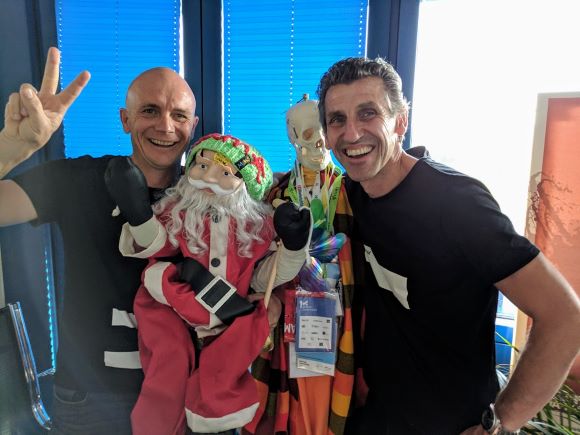