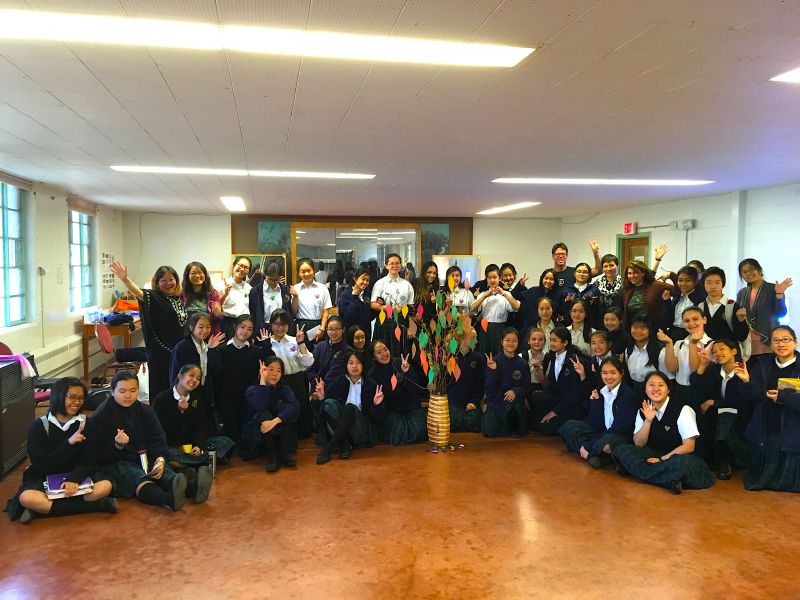 Last Friday, a crew of us convened a couple hours north of San Francisco, at the City of Ten Thousand Buddhas, for Kindness Circles with the Girls and Boys Schools -- which are literally named the Instilling Goodness and Developing Virtue Schools (IGDVS)!

By the intersection of Kindness Ave and Joyous Way (yes, their streets are really named that :)) -- we pulled up around 7:30 AM to one of the buildings of the Girls' School. One student was already there setting up a projector, as we unloaded various materials and goodies for the circle -- including tasty treats that Sandy, Helen, and Helen's daughter Ellie had spent hours baking the day before! 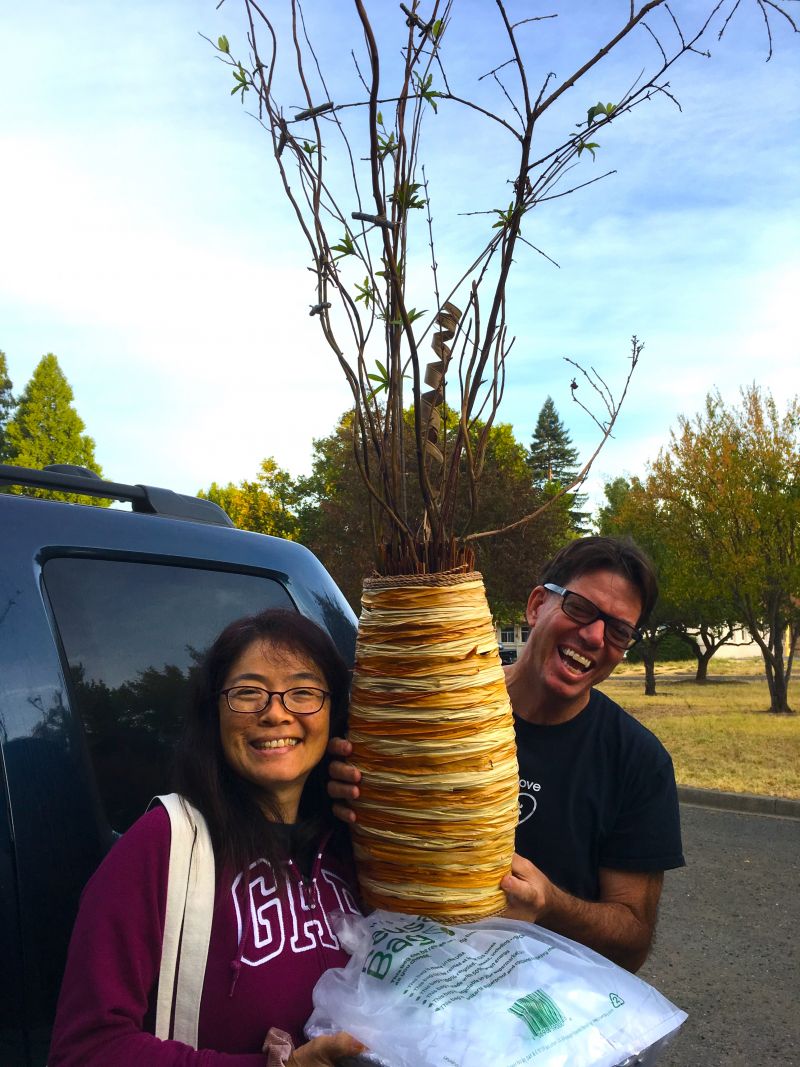 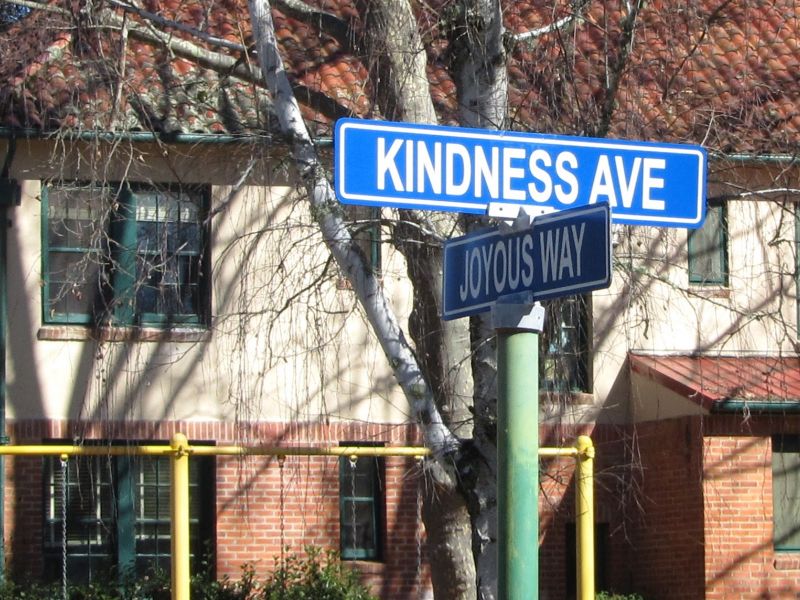 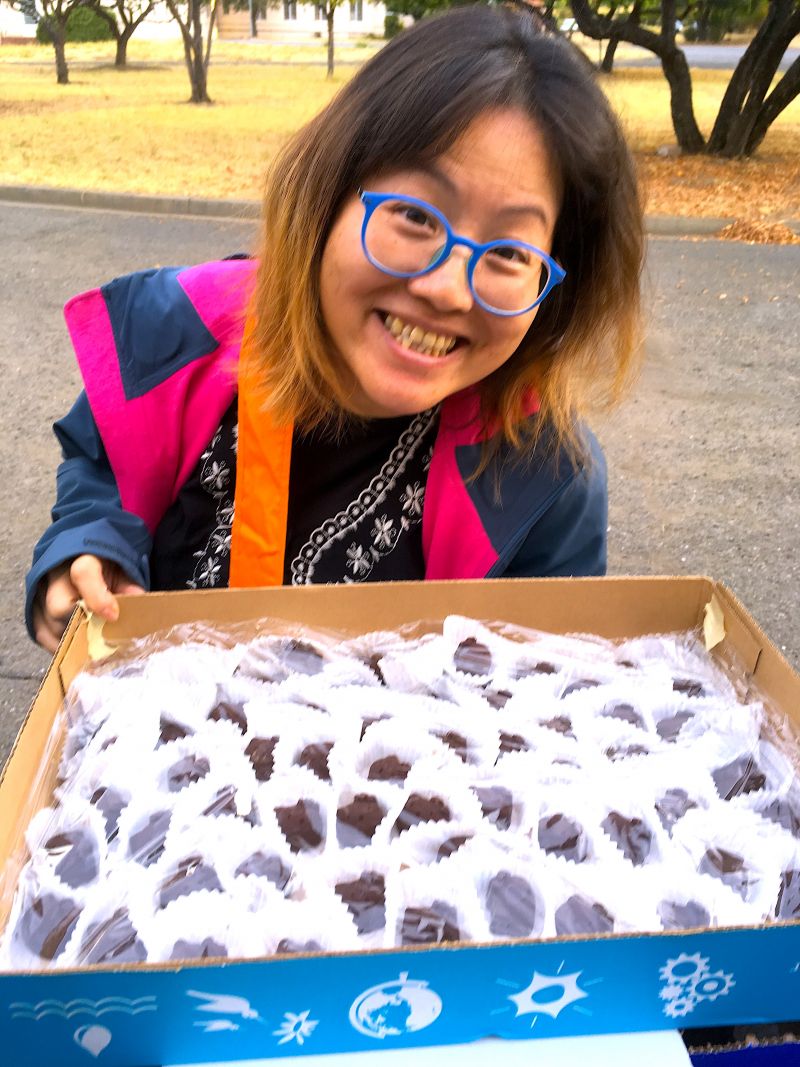 As we set up, the students filed in -- bright smiles on their faces, recognizing some of us from previous visits.

We circled up, and began with a minute of silence -- which Audrey framed as just "taking a minute to arrive; to let our minds catch up with our bodies." Then, after reading a passage on the theme of generosity, Sophie shared a heartwarming story of attempting to treat her 6-year-old sister to ice cream store. :) While at the ice cream store, Sophie realized she forgot her wallet, so they couldn't buy ice cream. As they were about to leave, someone waiting in line offered, "Here, we'd love to treat you to ice cream." She couldn't bring herself to accept such an unexpected offer, but before she could, the person at the counter already was holding out a freshly-scooped ice cream cone, on the house. Sophie and her sister were utterly blown away by the unexpected gift. With huge smiles on their faces, they accepted. As they walked home with wide smiles, the ice cream cone became unbalanced in the 6-year-old's hands, and tipped over, landing in a splatter on the sidewalk. After the initial surprise, Sophie's young sister remarked, "You know what, it's okay -- even though the ice cream fell, the gift is still with me!"

With such inspired wisdom from a 6-year-old, we then broke up into pairs and reflected on moments of kindness that we've each received. Then we reconvened in the circle and everyone shared their partner's story. Around the circle, we lit up at the colorful stories of unexpected kindness -- from a lost wallet unexpectedly returned, to how one student's older sibling puts surprise snacks in her locker, to the kind encouragement of certain teachers, and beyond.

To close out the circle, Helen recalled a story of hearing from a former student from twenty years back in Japan. She had written this student a gratitude card many moons ago, and this student said that it meant more than she would ever know -- she had received it during a difficult period in her life, and the card still hangs on her wall decades later. :) 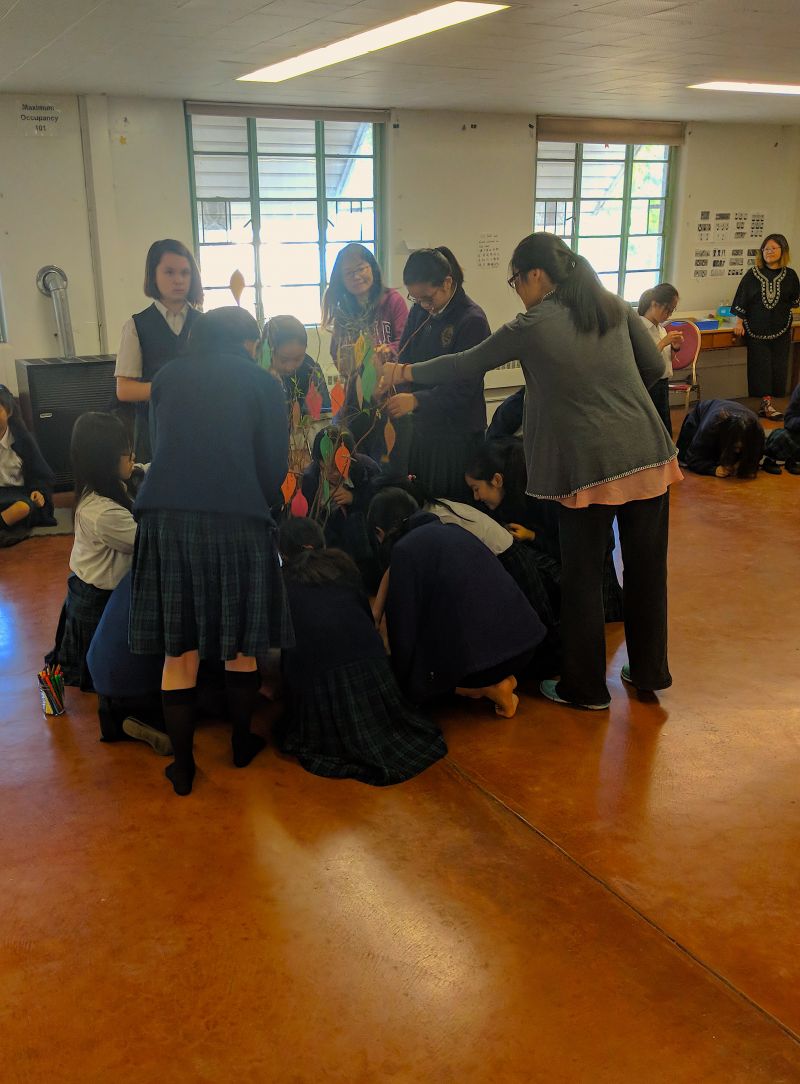 In the spirit of sending forth kind wishes, Helen and her teenage daughters had constructed a stunning mini-tree and a stack of 100 paper "leaves". She invited all of us to write down a wish on a "leaf" -- whether for humanity or a specific person or the environment or the world and beyond -- and hang it on the tree.

It was remarkable to see such wisdom unfold from these teens -- with so many wishes for authentic, grounded peace and happiness, like: "May all beings blossom into their truest self." :) Afterwards, we said the tree should now be named the "Wisdom Tree". :) Helen and Sandy offered their delicious homemade treats to each student, and we said our goodbyes as the students headed to their next period. 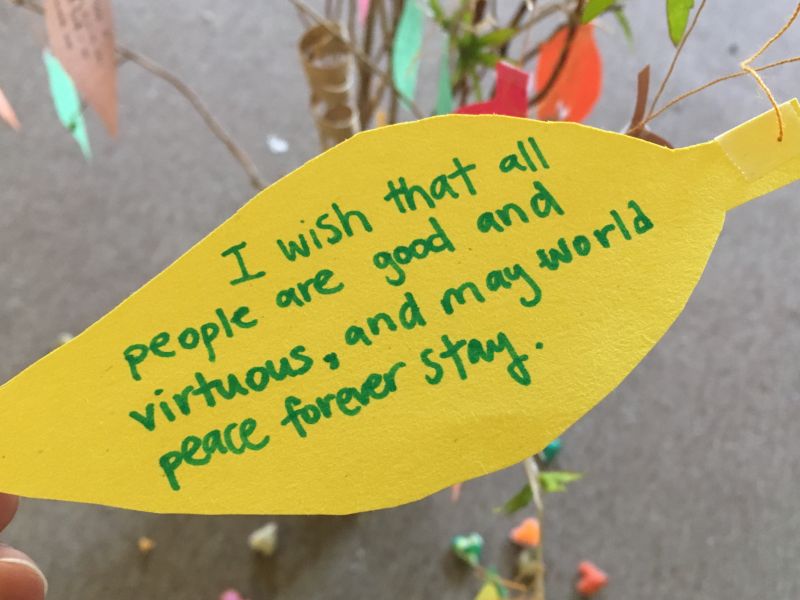 From there, we zipped over for a circle with the Boys School. As soon as we walked in, the high school boys were waiting for us in a circle that they had set up themselves. One student was finalizing setup of the projector and speakers. We kicked off another inspired circle with colorful kindness stories. Bradley recalled a time when a student's kindness reminded him how he constantly learns from students. "We often think that the teacher is the one who teaches students. But I want you all to know that you, as students, have so much to teach teachers, too." 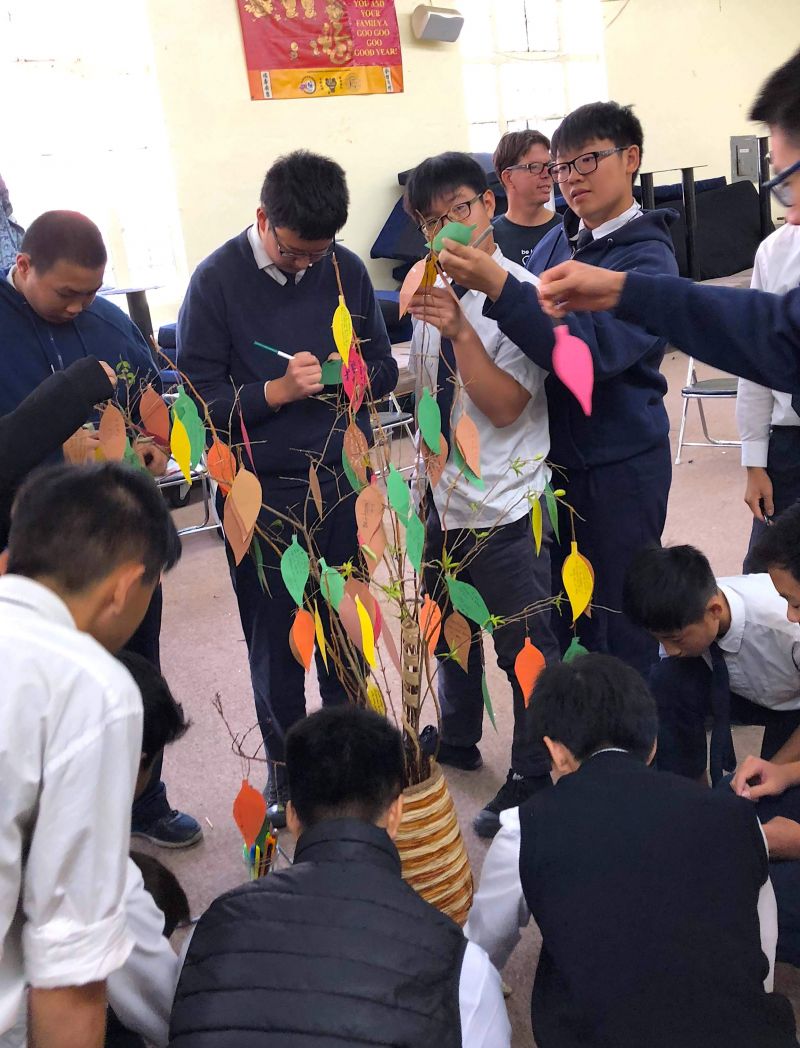 After a circle of sharing, we flowed into the wishing tree activity -- where the boys shared such thoughtful, mature, and genuine wishes for goodness in the world. :) It was remarkable to see how kindhearted these teenage boys were. We had brought a bunch of heart pins to gift to all the students -- and originally weren't sure how hearts would go over with teenage boys. :) But to our wide smiles, they happily received them -- some even asking for more to gift to their friends and family. :)

Finally, we closed with a short video of a 22-year-old who celebrated his birthday with 22 acts of kindness. As we packed up to depart, Helen and Sandy offered their love-filled treats to each student.

The boys then began to reassemble the room for activities later that day. It was striking to see the level of autonomy and responsibility that students carried (in both girls and boys schools)!

Bradley reflected afterwards, "the boys immediately took to rearranging the room after the circle in order to prepare for their next event. All students chipped in and none needed adult supervision. I was especially honored and moved by the young men’s formal thank you to us at the end." 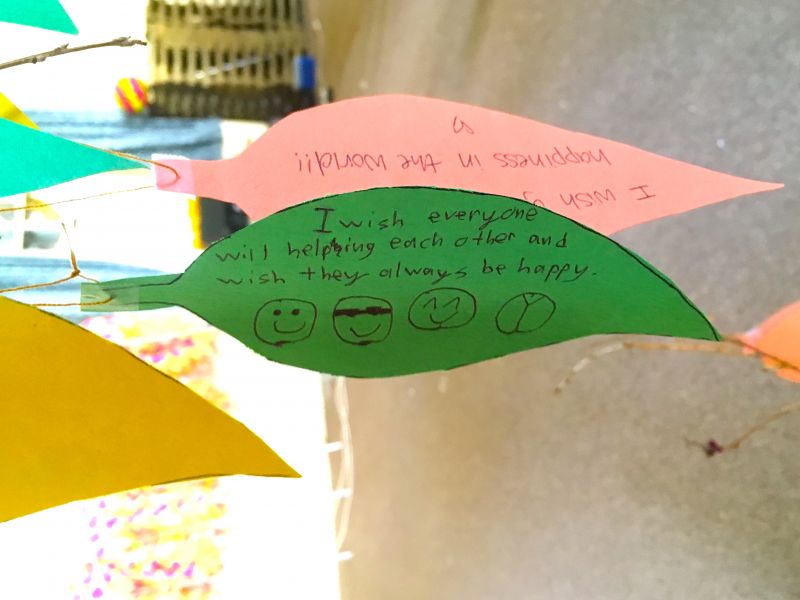 Without any direction from adults, the seniors organized their classmates to rearrange the chairs into rows, for a group of college students who would be visiting the campus over the weekend. In addition, they swiftly organized to move a large prop out of the way, against the wall.

As we readied to depart, one of the older students said, "Thank you so much for driving such a long distance to visit with us. Kindness is one of our school virtues, and we try to practice it often." He then told his classmates to offer our group a collective parting "thank you" (including a bow!), which is their usual way of ending a class and departing from the teacher. Amazed at their gentle kindness, we bowed right back. :) It's hard to know who is the teacher and who is the student. :) 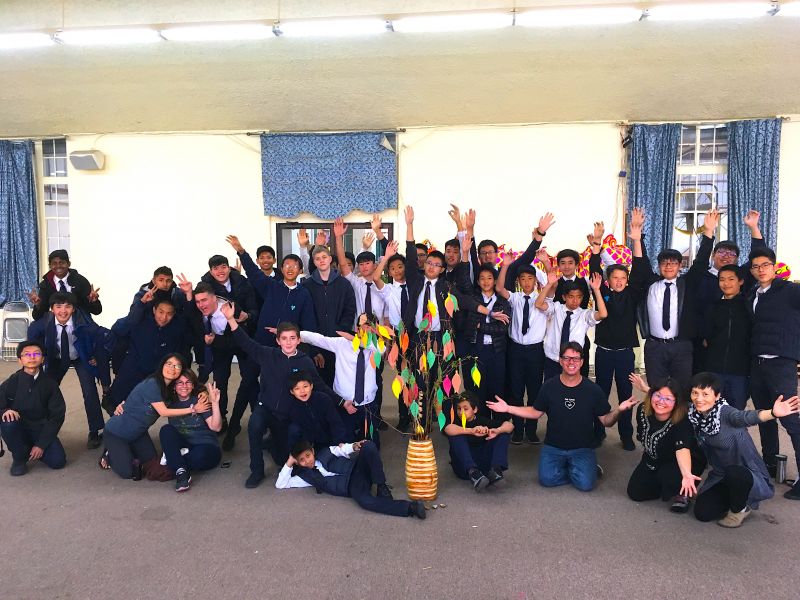 With it being barely 11 AM, one got the sense that a lot unfolds in one day on this campus. :) We joined the girls school for lunch, where they had prepared a special celebration of teachers, in honor of Confucius' birthday. With original gratitude-themed song lyrics to popular songs, they sang, facilitated interactive activities, and even handed out handmade origami cards and chocolates to thank their teachers for all their efforts! 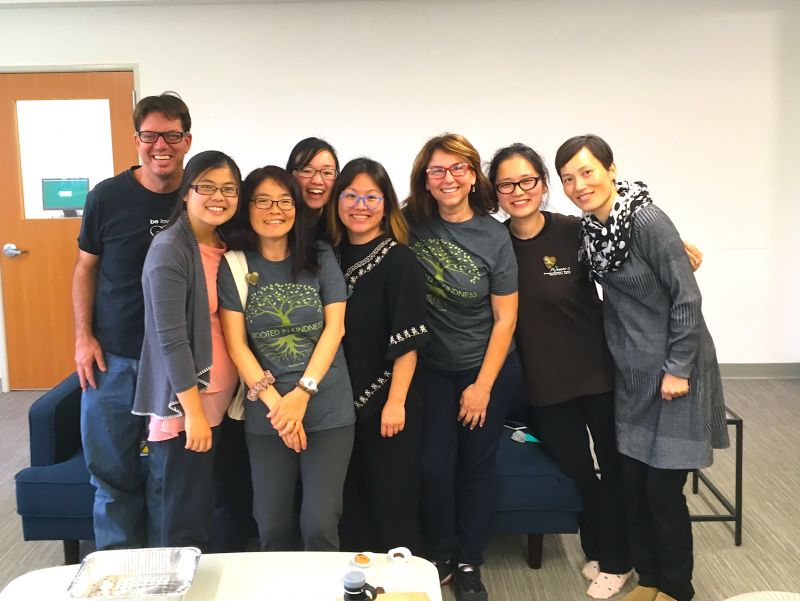 After lunch, Sophie, Xiao, and Angela J. showed us around the university building, where they are both enrolled as masters' students. Angela M. joined us (and showered us with cups of freshly brewed tea!) as we flowed into a spontaneous circle of sharing reflections and learnings from stillness and service. :) Prodded by our group, Sophie and Xiao offered insights from their Master of Arts studies in this unique monastic environment, as Sandy prompted Angela M. to share about her journey from working in high-powered virtual reality to serving as a full-time volunteer for the last 6 years at CTTB.

Afterwards, it was time to depart. The ride home flew by as we reflected on the days' unfoldings and various other emergent topics.

In a follow-up note, Xiao wrote, "What an honor to spend such an inspiring and kindful Friday morning! Both circles flowed organically and effortlessly as tremendous invisible work was done beforehand and behind the scene. Very inspired by the kindful wisdom from the students who wrote on the handmade leaves, which are now hung on the Wisdom Tree (a tree that has many names). I bow to you all for your noble presence and kindred spirit that will continue to light up my path onward."

Similarly, Bradley expressed what we all felt: "What offers me the most hope is that these young adults are being offered not just knowledge, but the wisdom and values that they’ll need to use that knowledge for good."

Seeing so much news media of human integrity gone awry -- it's particularly heartening to encounter, witness, and participate in such spaces that unlock so much potential of each human heart. :) 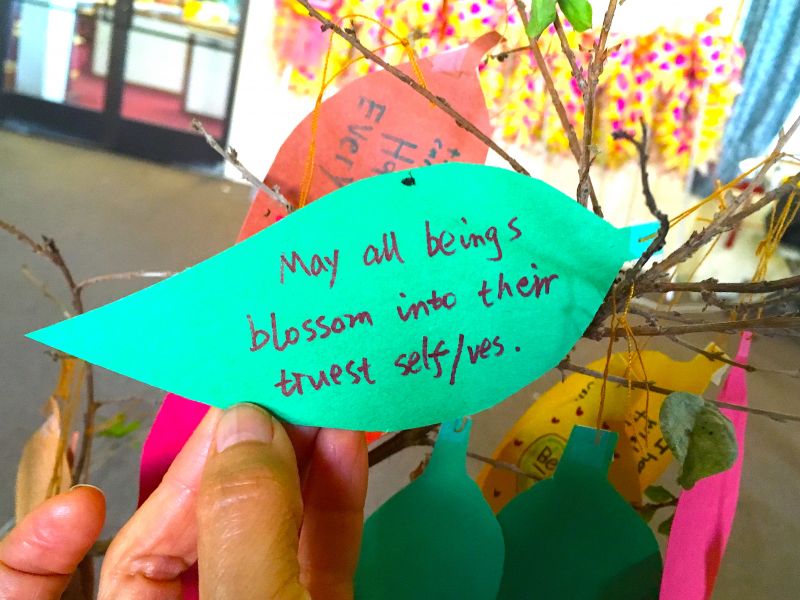 [More photos from the day.]