Last weekend catching the generosity ripples from last month, our team of 20 volunteers came together to animate a second Karma Kitchen Picnic in the Park. This time we had more hands, more food, more guests, more activities, more kindness, more smiles and more magic. What a joy to witness everyone do small things with great love, and watch the ways that the park and community came alive - the whole is greater than the sum of its parts. You really have no idea what will emerge in a public space when a few friends get together to give with no strings attached except know that goodness will be generated.

It's a dream that we could return to practice and experience Giftivism right here in Toronto: Generosity isn’t a zero sum game because everyone wins.

The Setup
Volunteers who joined us in the morning to clean up the park and helped breathe a little love into the park. This time we had a Kindness theme and a beautiful Kindness tree where guests could either add to or get inspired by an act of Kindness. 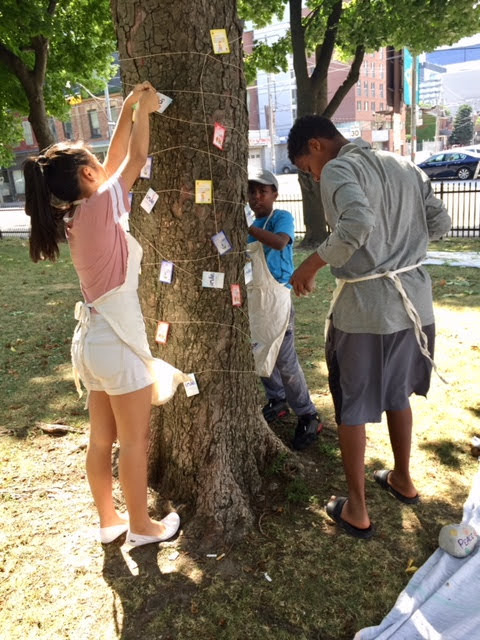 This video filmed by our young rockstar volunteer Nuni should give you a good idea of what happened.

The Food
Thanks to the amazing work Building Roots does to enable urban farming in the city, we were able to harvest the freshest greens and herbs at Ashbridge Estate for our vegetarian and vegan banh mi. The rest of the produce were provided by Moss Park Markets Last time we ran out of food within an hour so this time we doubled down to make 132 banh mi, coleslaw/bean salad and more than enough cookies and banana bread were baked and gifted by volunteers. And if that wasn’t enough, we thought we’d also gift 100 gluten-free curried jackfruit patties by Comenyam. Very grateful that we could double our banh mi order and for the generosity of Grace and her staff at Tung Hing bakery to wake up super early to bake us this delicious bread. It was so moving to watch the team came together to form this efficient assembly line and prep all this within an hour for our picnic. We were lucky enough to have a mom and daughter volunteer team from Vietnam to learn how to make a Canadian Banh Mi :) 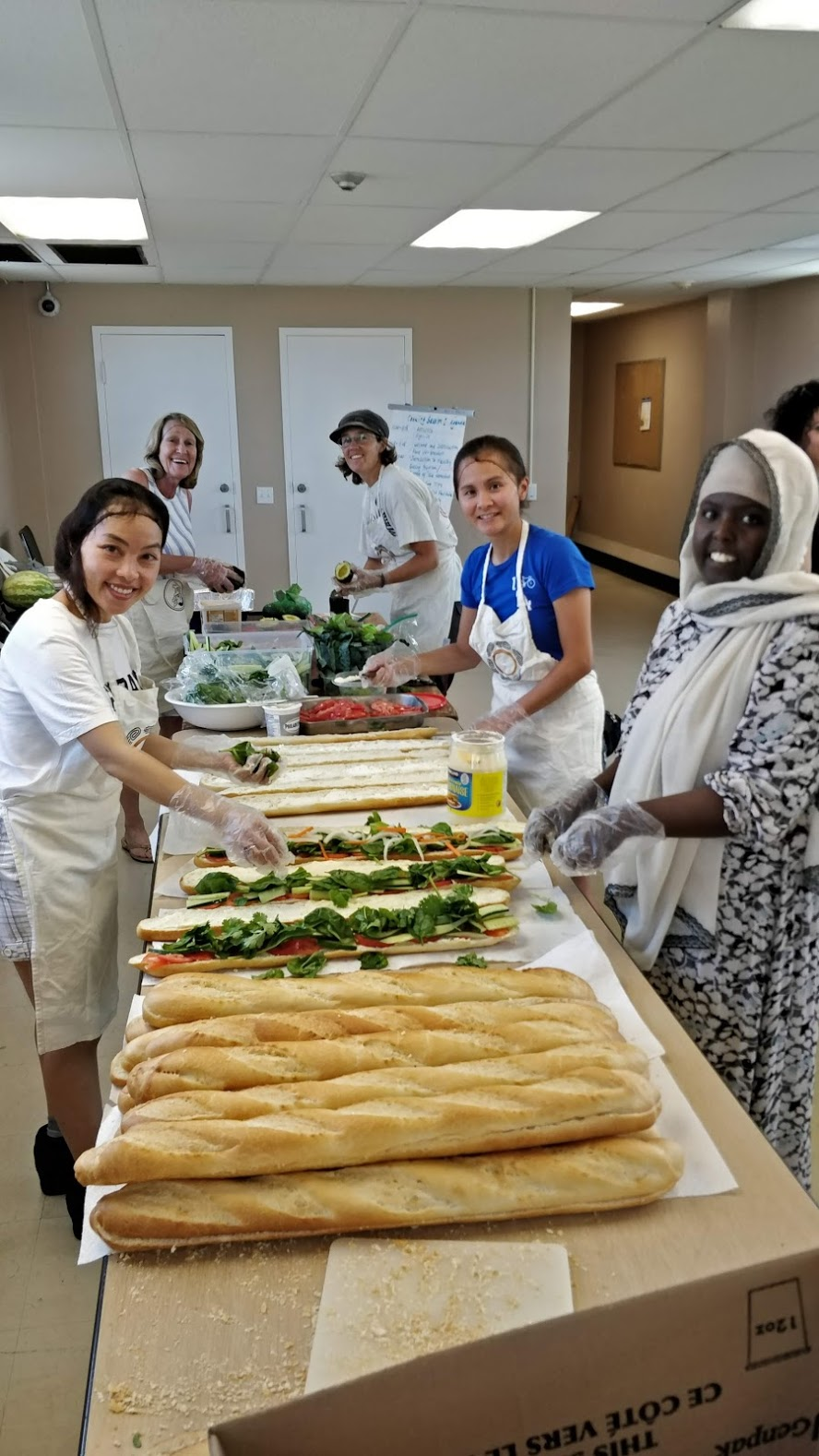 Truth be told, not sure where else you would be able to find a FRESHER, more LOCAL, YUMMY banh mi, made with LOVE and served with KINDNESS. And, best of all, it was gifted to 120+ people in the community who all received a bill of $0.00 as an experiment in generosity. Very happy we didn't run out of food until the end. 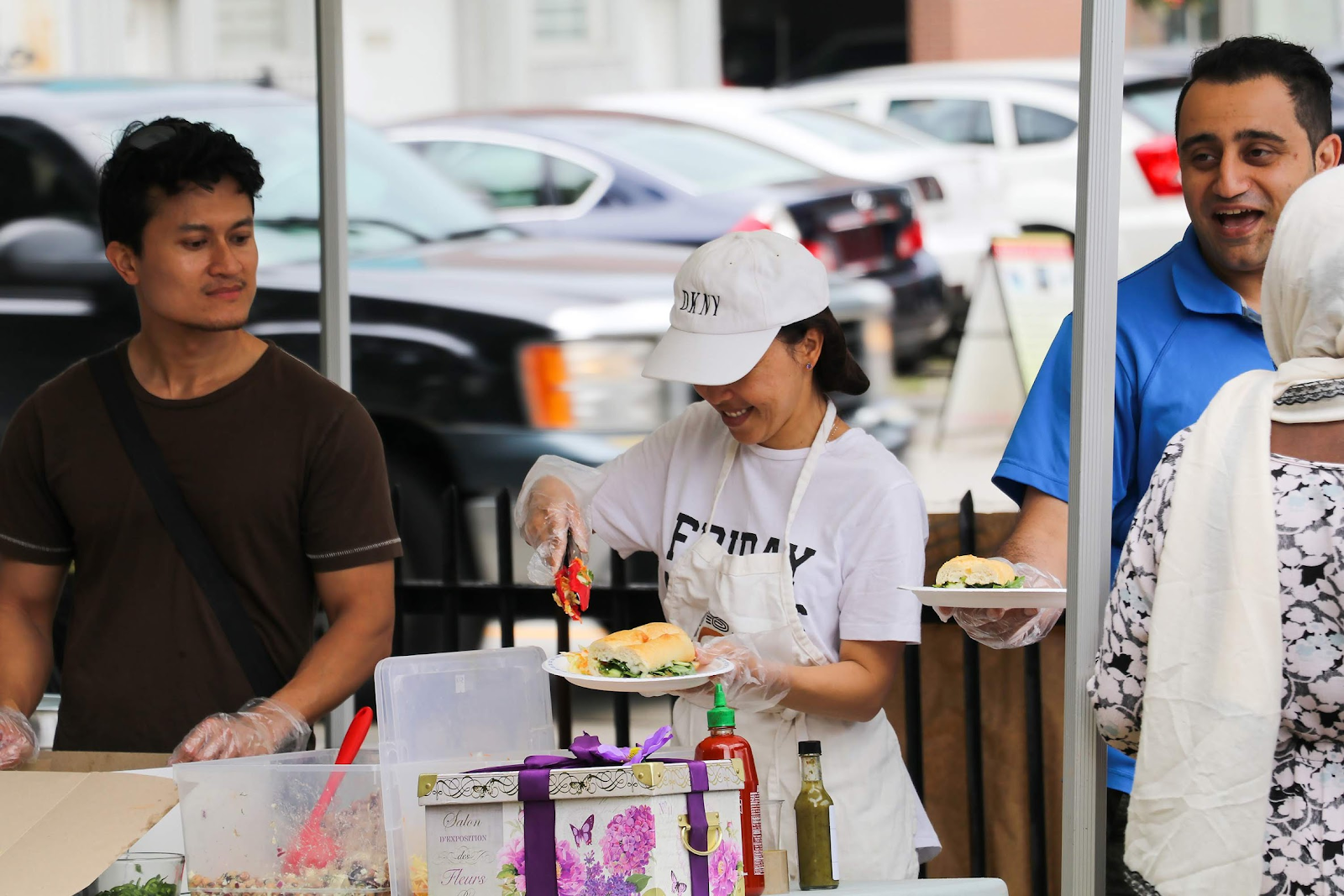 The Magic
I’m going to let the photos do the talking here because I’m still at a loss for words to describe all that transpired.

Our volunteer team started the day in a circle reflecting on Small Graces and tasked with making someone’s day in the next 4 hours. And whether it was pausing to speak with someone in their native language, grabbing seconds to put a smile on someone’s face, or popping by each table to offer ice pops, it was such a joy to watch it all unfold. 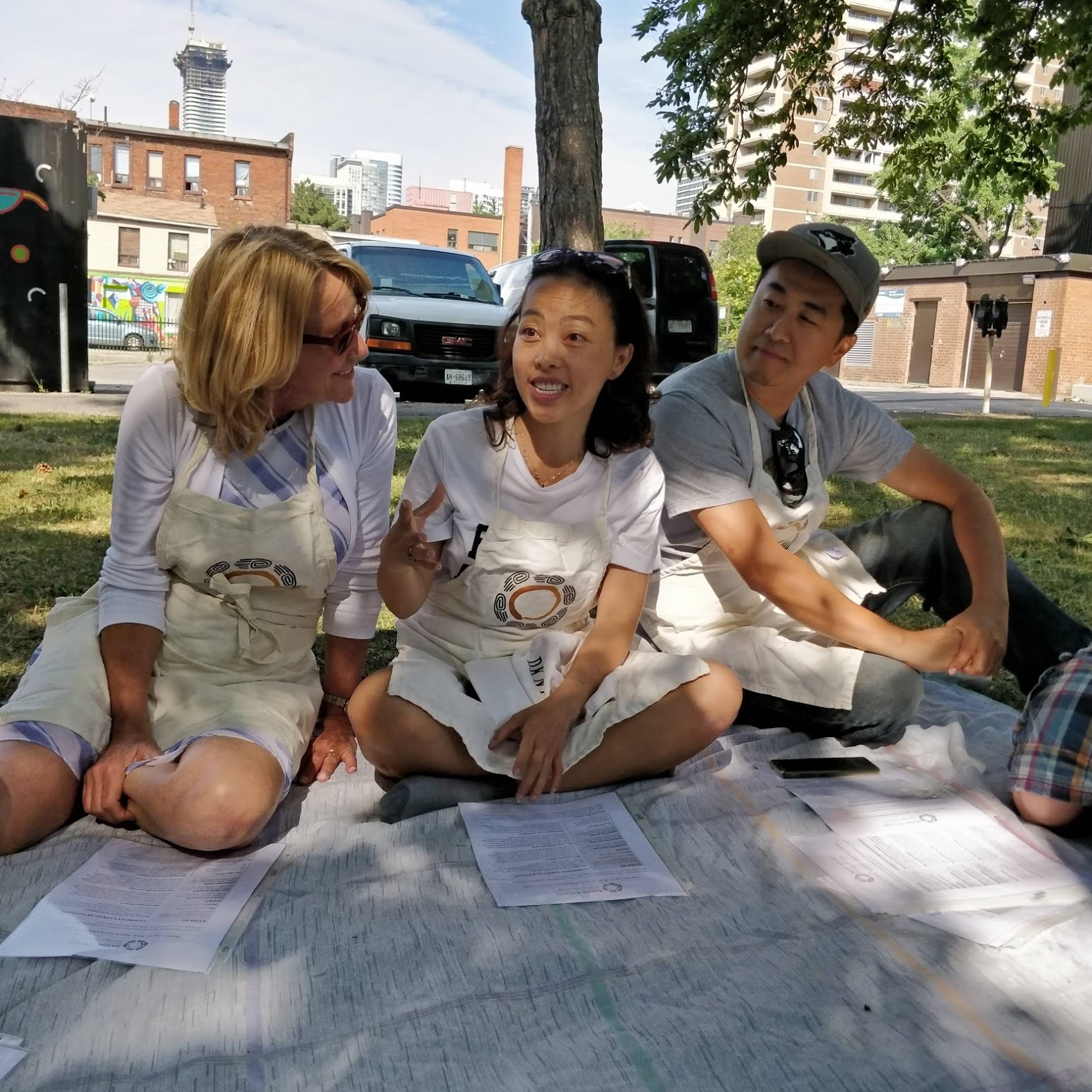 This time we had more community tables and blankets for guests to enjoy themselves and meet new people. We had an amazing violinist. We had plenty of activities and pay-it-forward gifts and incredible guests. Eva hosted an Art Zone that opened up plenty of kids creativity. 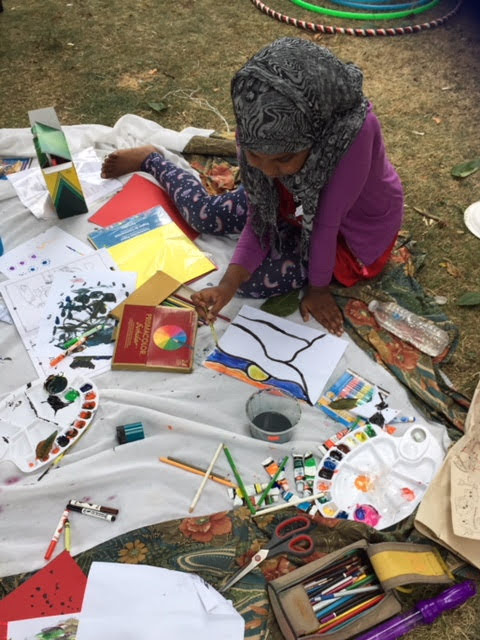 TIRF gave a chance for the youth to move. Jon Callegher and team anchored an activity that prompted guests on what their vision was of Moss Park in five years. Anita Agrawal anchored the kindness tree, asking guests about their ideas on Kindness. She observed, “I felt when people were asked to talk about kindness, their faces became so beautiful and relaxed. The contemplation of it alone, helped to facilitate their intent :) it was beautiful.” 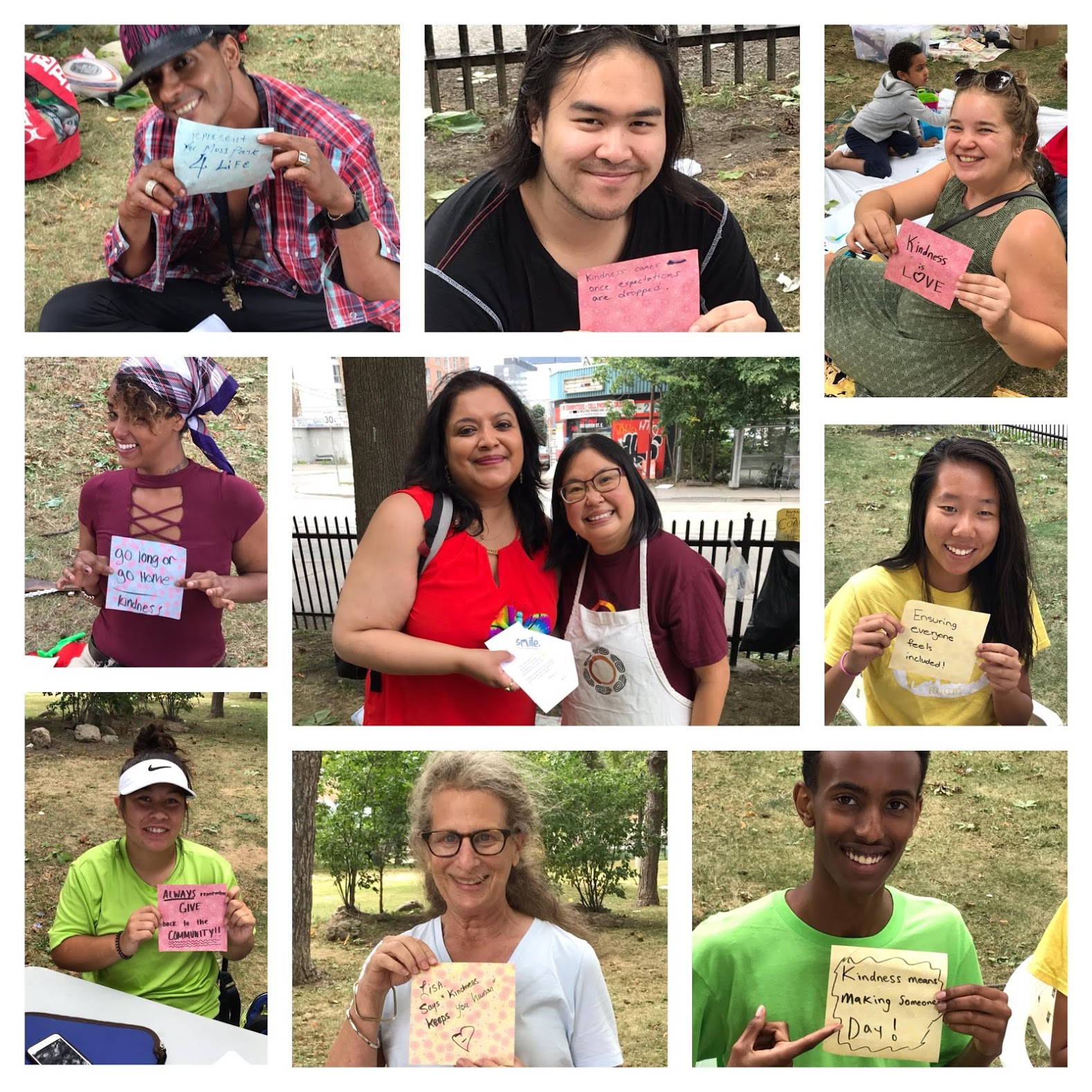 Guests included the girls of Youth Gravity were kindred partners in kindness as they challenged each other to complete acts of kindness from the Smile Card Deck and do a 21-Day Kindness Challenge. They grew up in Moss Park/Regent Park area and are currently organizing a YOUnity March to shine a light on domestic violence. #YouthGravityRocks We had a guest in the last Karma Kitchen new to Canada who decided to come back, take public transit for 2 hours to come volunteer at this one. Good thing he did, serendipity connected him a new friend who also moved here in the same week from the same town. We were also blessed to welcome Dev from Ahmedebad who told us stories about the pay-it-forward restaurant called Seva Cafe.

I found myself welcoming a few families in Vietnamese, other servers were also delighted to speak in Russian, Arabic, Persian, Chinese, Hindi and of course the universal language of food and love :) Can't say I know of any restaurant or community event that could serve such a diverse community in their mother tongue, especially just thru serendipity.

Two Indigenous men came and one was blind. I had the pleasure to serve them and asked how they discovered Karma Kitchen. The blind one said, “I heard laughter on our walk around the block and told my friend we should come.” Then got an extra surprise when they realized the meal was a gift.

There was professional photographer at the picnic when I approached him he said, "I've never seen so many magic moments I need to capture." and immediately sent these beautiful photos a few hours after the event. Politics done right, an example at Karma Kitchen
It's really amazing that three city councillor candidates for Ward 21 came to our picnic, and two pitched in as Karma Kitchen volunteers to serve the community. After the event, I saw a post from Anita that warmed my heart.

“Today I met with two other incredible community leaders who are also running in ward 21! Jon Callegher and Suzanne Kavanagh. I write this because I really and sincerely believe campaigns are about building people up not tearing people down, they’re about community, not individual egos and they are about addressing the important issues! I remember Dave Meslin talking about how campaigns terms are so “war” related so, Let’s #reframethenarrative!!!”

Then saw the whole thread on Twitter with Anita, Jon and Suzanne all sharing mutual respect and comraderie. This conversation recently at Banyan Grove, which we all would resonate with: Wouldn't it be great if as people were running for office, the debates were opposite the way they are now -- where each candidate spends the debate complimenting their opponent and shining light on all her/his strengths?"

Generosity Experiment Continues…
So...we're going to do it again! The next Karma Kitchen Picnic in the Park will be on Saturday August 25th. RSVP here to grab a seat at the community table. We now have a volunteer application if you are moved to serve.

It’s hard to believe this is just our second time in Toronto. It’s such a blessing to practice Giftivism with such incredible volunteers, guests, partners and the whole Servicespace ecosystem. Thank you. 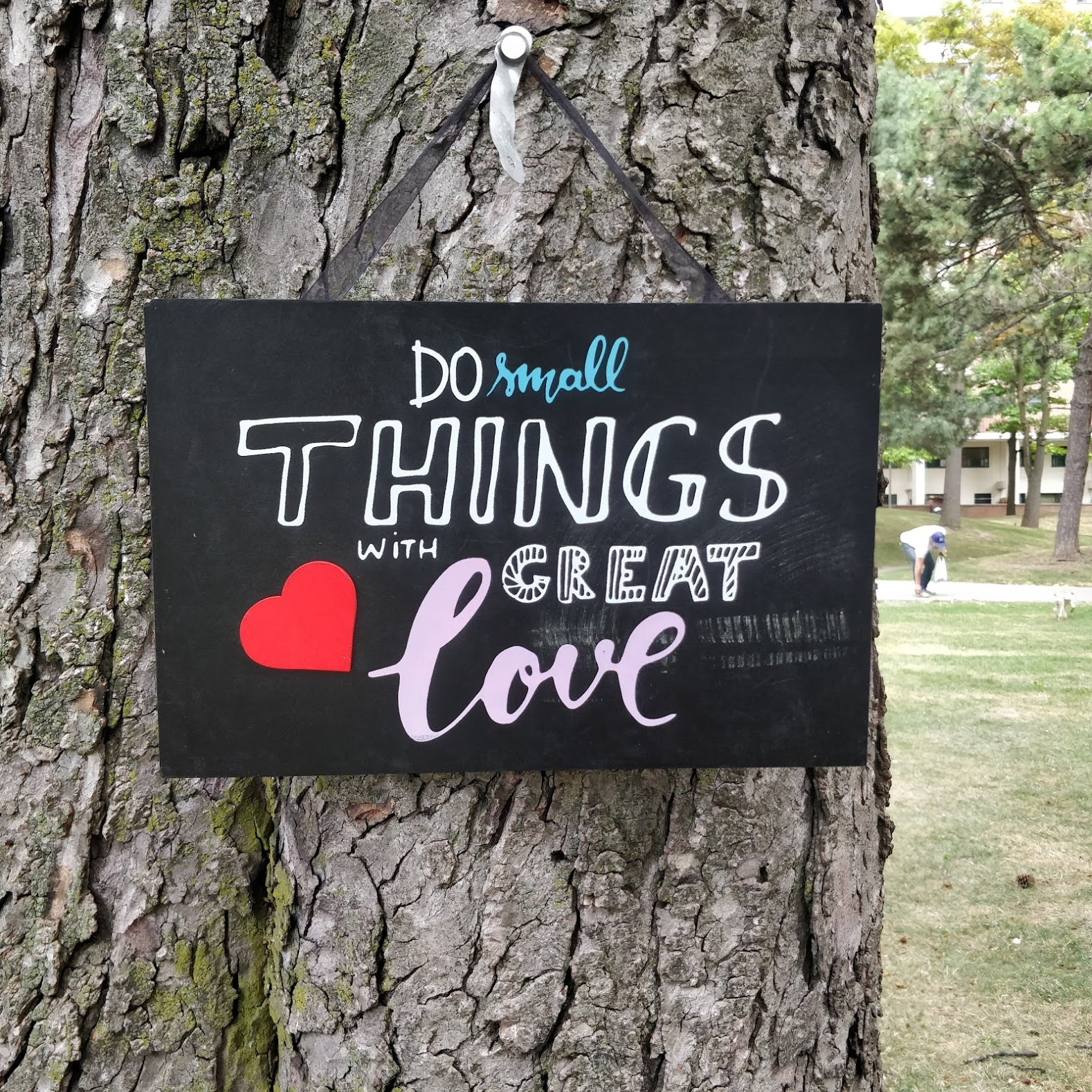