A few days back I was reminded of my 10th-grade journey while preparing two kids for their re-test. It was a crucial milestone for them to pass this exam as there is a high probability of drop out which means this might be the last time they would be entering a school premise in this lifetime. We were a team of three to four mentors working in a team. I had the charge to teach them Maths and Science in the evening after my office. Technically I was teaching them but there was so much to learn from these children, sharing a few thoughts.

Faith can make a difference!
Whenever I asked them which subject should I teach or what method would you be more comfortable with in terms of the teaching, their answer was simple. Whatever and whichever way you want to teach us, we are fine with it. This openness in them gave me the space to explore and experiment. To write on a blank board is much easier than to write on a carved one. Plus their faith in me became a creative constraint for me wherein I was more aware of how and what am I bringing to their plate.

Acceptance without any expectation!
Here the acceptance was a two-way process. I had to accept them as they were which was a big-time cultivation. There were times when I became impatient or judgemental especially while working on the so-called 'basic concepts'. It was really interesting to get into their shoes and look at the blind spots. I feel a real teacher is the one who can dissolve any concept in a way which is understandable for anyone and everyone. It was equally incredible how they had accepted and embraced all that was coming from different mentors who were working with them. Each one had a different way of teaching with different personality and temper but they all received it so gracefully without throwing any anger tantrum or anxiety.

From resistance to casualty to sincerity
If we compare the graph of efforts, it would surely be a steep one as it was only at the end that they realized how important it was for them to finish this lag. In the initial days, we tried various ways just to break their inertia. It was one of the crucial phases. There were times when they studied 12-13 hours in a week and there came days when they had to really stretch themselves studying 12 hours a day. At various occasions, we experienced resistance from the parents especially in terms of the number of hours they were spending in studying because these children stay in the servant quarters and spent a few hours helping their parents too. But in the latter times, in times of their parent's expectations, took a stand of just focusing on studies which were really supportive.

Patience with calmness.
Last three days we had really pushed their comfort zones. Just the night before their finals I know how much pressure I was feeling. With the ticking of the clock, I was losing patience but they were calm which I feel was so remarkable.

Touching the finishing line of hard work
After completion of one of the papers which had a lot of tricky questions, I was discussing the answers with one of the kids. As we were going through she started crying. That was the first time when she acknowledged saying I know I started my preparations late and I should have started studying from the start of the year as compared to just studying in the last few days. The kind of effort that I put at the end, if I had done the same, I would have scored very well. This was an important breakthrough as she herself realized that she had the strength to stretch and most importantly had equal chances of succeeding if they put the right amount of effort. 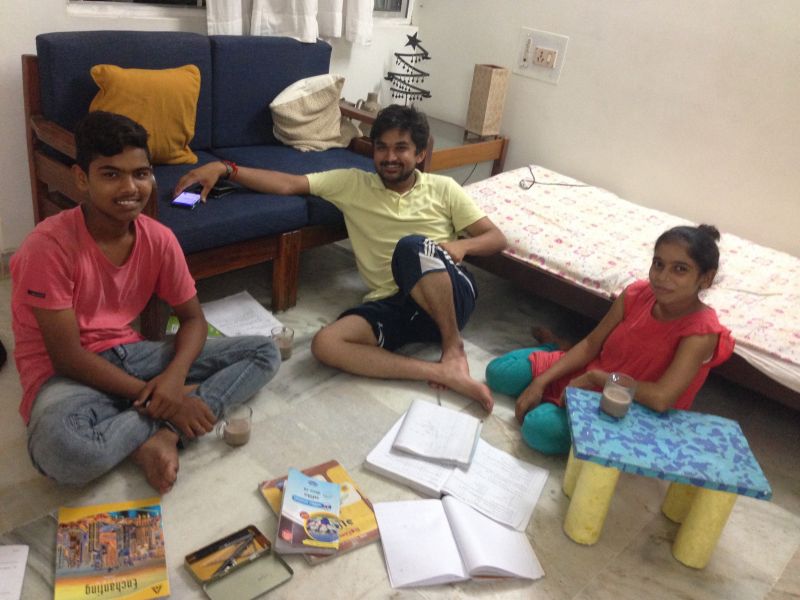 Switching the driving seats
I was reminded of this quote, 'Alone we can do so little, together we can do so much.' especially when I had my moments of saturation. All the mentors have a full time working job plus they were spending almost 6-8 hours with the kids which was quite a lot. But just having a team made all the difference. Any time the other felt a little weak, we know someone was ready to switch the seat:) take a deep breath and keep working.

A sense of brotherhood, love, and care.
Before their exam, I had told them that if required I can drop them to their respective schools. On the day of the exam, while we were doing our final revision one of the kids said today I am going to go to the school with you. Just hearing that, it gave me this deep sense of brotherhood and was happy that they don't see me as their teacher but more like a brother. On our way, we kept the revision ongoing and one of the questions that we solved then was even part of the exam paper. In this time we had meals from different homes. A friend shared his living room which was converted into a study room for a few days. I too had packed my bags for a weak and had moved to Pandya house. What an amazing feeling of ownership it seemed.

Closure for a new beginning
After the exams, we did a small circle of sharing reflecting upon our personal experiences and learnings. We thought the circle would end up in fifteen minutes but it got extended for two hours. After a few minutes of silence, one of the kids shared that how she has never got a teacher who taught her this way neither in school nor in any tuition class. She shared no one has ever put this kind of effort the way we did, not even her own family. This is the first time she realized what it means to study, what are the processes and techniques. If she had got such exposure earlier, she would have cleared her exams in the first go itself. Another kid was quiet for a long time and gradually shared how everyone has treated him with unconditional love and care. He thanked each one of us. His aha moment was to study till 2:30 am and getting up at 7:00 am. He added this experience will always stay close to him.

All of us were in tears of gratitude, gratitude for the effort that the other had put to keep the vigor alive. We don’t know what will be their exam results but all of us feel that collectively we did put our best effort and are feeling satisfied. Most importantly the kind of affinity that has been created in this process feels like a blessing. What matters, in the end, is how well we perform in the exams that life has to offer.