Living in NYC, people tend to be in a bubble of isolation.

New Yorkers have a reputation for an individualistic drive and not having an open heart. There's a layer of thickness they feel the need to uphold for protection. In a city so densely populated, a lot of us have a strong desire for community that hasn't been fulfilled. But what happens when New Yorkers think of beings other than themselves?

The owner of a restaurant in Brooklyn, was gracious enough to open his doors on June 11th to do an experiment in generosity. I was so eager to share the gift of nourishment to the community that I decided to coordinate the first Karma Kitchen in Brooklyn in just two weeks. The host restaurant gives a vibe that you've been welcomed into the home of a friend or family member. They specialize in slow cooked, live, vegan food. Most restaurants in the city solely care about making the most profit in the least amount of time, and chefs are filled with anxiety from the pressures of the restaurant industry. The energy of who cooks the food, as well as the energy of the food itself, is transmitted into who consumes it. Therefore, it was imperative that I chose a restaurant that didn't fit in that category. 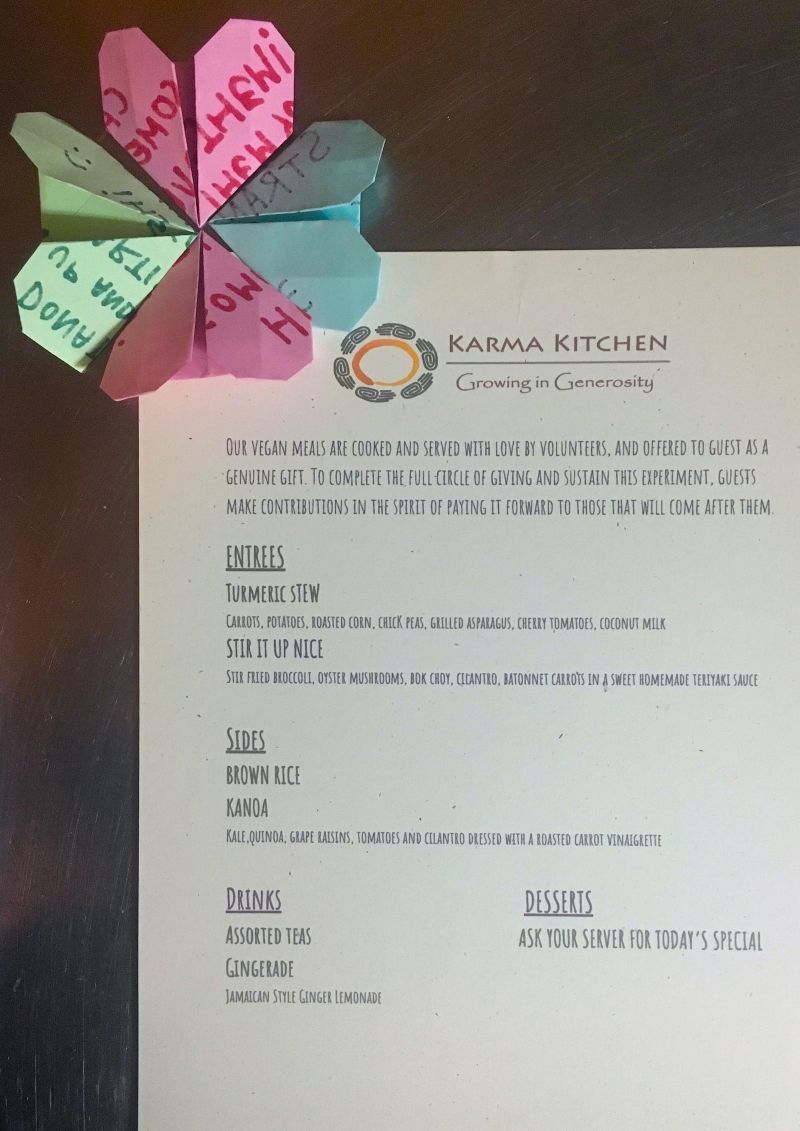 The restaurant owner, Michael, was kind enough to volunteer to cook with love on his day off. He even went beyond and gifted a special dish for a woman who had a lot of allergies! Elena and Vittoria, an Italian mother and daughter, were so grateful to be able to volunteer in the circle of giving together. Vittoria helped write heart-shaped acts of kindness that we put in a brown bag for guests to pick before they left to encourage more generosity outside of Karma Kitchen. Elena made an amazing avocado chocolate mousse that was a favorite among guests. Ivi was our star server; he was super personable and engaging. Since it was such a small team, we all had the opportunity to lend support wherever was needed whether that was washing dishes, plating food, or taking an order. The volunteers had a beautiful synergy that helped the flow of service move seamlessly. I am eternally grateful for their belief in the vision, showing up, and helping bring it to fruition!

The turn-out was pretty good considering it was the first one. We were able to cover the cost of food and had a surplus of money to contribute to another generosity project. Everyone that participated in the experiment left with filled hearts and tummies. :)

Gratitude permeated the air: it was a constant ripple effect.

Rochelle, one of the guests that came by, said she wanted to support because she's working on her own non-profit rooted in community and providing resources to help people heal. Suanny, another beautiful soul, got a grant to start facilitating nutrition and cooking workshops that Michael offered to open his restaurant space for. There were guests who were keen to get in the kitchen and help in whatever way needed; and others who felt compelled to volunteer their time for the next Karma Kitchen. Myself and others left feeling empowered to be-the-change, inspire our brothers and sisters, and unify. For an upcoming experiment in generosity, my intention is to have low income people in the neighborhood experience the circle of generosity and indulge in a nutritional meal that they can afford.

I'm deeply grateful for discovering ServiceSpace, for all those who helped in giving me the tools to confidently coordinate something for the very first time, and for the opportunity to be of service to our community.