This past Saturday my wife, Rebecca, was taking my son Jonah and a few friends put-put golfing to celebrate 🎉 his 11th lap around the sun. On the way there he saw a man with a sign asking for help. Jonah, feeling concerned for the man, immediately asked Rebecca to do something. She could read between the lines that it didn’t feel right to him that he’d be off celebrating with his friends while this man seemed unsupported. Rebecca told Jonah that she didn’t even know that money was what the man really needed. However, if Jonah wanted, on Monday (his real birthday), after school we could go do something to support people in a similar situation. Jonah felt much better thinking there was something he could do and agreed to the suggestion.

So this morning, his real birthday, Jonah reminded us what his birthday wish was, to help others. His good friend Ollie came by before school to offer him birthday wishes and Jonah asked if he wanted to join him after school. The answer was a resounding yes. I luckily had my own noble friend, Pancho Ramos-Stierle, who generously offered to join us for the festivities. So I packed up some goodies (extra sunglasses left over from a previous birthday party, spinning magnets, heart pins, peanut butter, jelly and bread) and we headed off for an hour long drive to Pancho’s in East Oakland.

On our way there, we decided to stop off at Target to pick up two of the items we know houseless people often need most, fresh socks and underwear. As we got off the highway, low and behold there was a man asking for assistance. So we reached into our bag of goodies, and offered him sunglasses and magnets. He had a huge smile and said he could really use the first and would enjoy playing with the latter. Both boys immediately remarked about how good they felt after the interaction.

When we arrived at Pancho’s, he silently directed us to his kitchen where we began making PB&J sandwiches (note: in the tradition of Gandhi, Pancho has a vow of silence for Mondays). We then headed out looking for people we could practice generosity with. We nearly stopped at a few RVs, but the boys said they wanted to give the items to homeless people. I began to explain to them the gradients of homelessness, but Pancho knew better and just pointed us one block ahead.

At our first stop we met Antonio, who was living in a non-working car and a tent with his father. The boys were a bit hesitant (as was I) at first, but then Pancho reminded me (on his pad of paper) to tell Antonio this was Jonah’s birthday and this was something he wanted to do to celebrate it. Antonio gladly took some socks and two sandwiches for him and his father. After showing Jonah and Oliver around their humble makeshift home. Antonio told the boys what a gift this was for them. After handshakes all around, and a bear hug from Pancho, we returned to the car. I asked the boys if they wanted to also share the watermelon. They shrieked with excitement, picking up the heavy fruit and bringing it back to Antonio. Next we found a few tents beside an RV. After knocking on the door of the RV, out walked a man and women, who offered Jonah some very kind words and gratefully received boxers, underwear, socks and sandwiches. Our conversation with them sparked a man across the street to come see what was going on. He told us there were a number of people living across the street that we might also enjoy meeting. So we followed him.

Once there, the man introduced us to a handful of other men. Each told the boys how much this meant to them as they reveled in the new clothing. One man changed his socks immediately, another invited us into the neighboring RV to meet his children. Inside this small, broken down vehicle lived three young kids and four adults. Lucky for us, we had those magnets, which worked as the perfect ice breaker with the children. Pancho immediately took the heart pins and began pinning them on to each adult, while I explained to them where the pins came from and that today was Jonah’s birthday. While the kids played with their magnets one adult, who briefly left, returned with some extremely nice sunglasses in hand. He said his family didn't have a use for them and wanted one of us to have them. Oliver gladly obliged 🤗. Talk about about a positive feedback loop, the first person we met on our journey we handed our sunglasses to.

Interesting, despite their seemingly desperate circumstances, I didn't see a single person take more than a single package of clothing. In fact, many folks told us of other people we could share our bounty with Whatever we offered was received with gratitude and often shared among their friends.

With our next two successive stops, and the successive hugs, handshakes, heart pins and gifts, the boys became less timid and more excited to share their gifts and to connect with each person. They saw the last man from a distance, as he was holding a sign in a car median. Pancho and I caught up with them as they were already talking to him. However, when they met this last man, who called himself R.D., they were a bit shaken. While very friendly, they couldn’t help but be transfixed by a gapping wound he had on his right arm. RD explained that he recently had a motorcycle accident and was saving up to meet with a bone doctor to repair it. It wasn’t easy for the three of us to look at, but we did our best to connect with him, to hear a bit about his story and support him. We then headed back to our car.

As we drove off, we waved goodbye to R.D, but both boys were caught in sadness about R.D.’s situation and worried about his wound (and the possible nightmares they might have from seeing it). Pancho then wrote them a small note they won’t soon forget. “Feelthink about his heart and his shining eyes and his wound, all at the same time. All this coexists and it is reality as it is.” It was a lesson to each of us, R.D. was much more than his wound.

After dropping Pancho back home, receiving his own gift from Peace Chain Joe, and us receiving from him a plaque describing noble friendship, the boys felt exalted, saying “this was a day well spent”. Toward the end of the drive home Jonah asked me how I practiced Judaism when I was young. I told him that my parents sent me to religious school on Sunday mornings. He took a minute, then replied, “if my religion is kindness, can we spend our Sunday mornings doing acts of kindness?”. Now that’s a religion we can all practice!

P.S. Here is a photo of my son's beautiful description of the experience, how it transformed the ways in which he saw those with less materiality, and what he learned from them😊 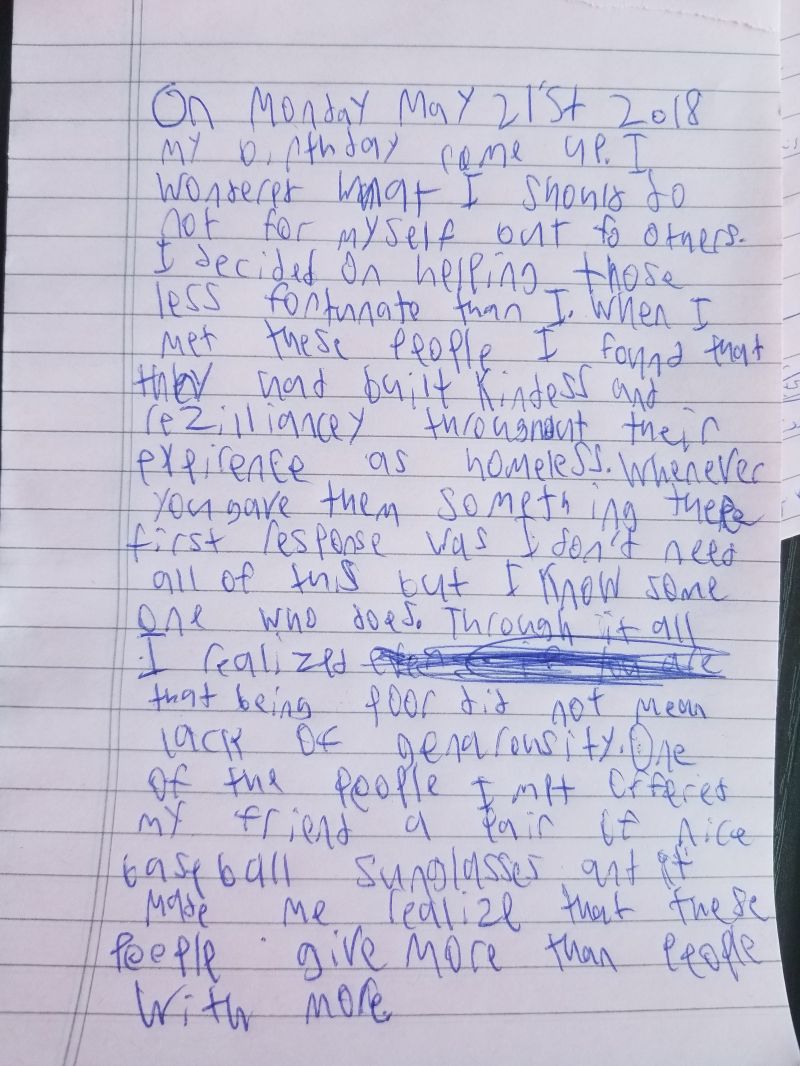 Jan 26: seo on 'Bulldozed by Love, in the Company of Noble Friends': "cyanidepotassium