About 6 months ago, as I was emptying my bag, I found a SMILE card. I kept that card on the entry cabinet and every day coming in and out of home, that card would make me smile and also invite me to pass it on. Except that I was too shy. New country, new language, new culture… how will I explain it? How will the idea be received? I had too many self-doubts that were holding me back.

As days passed, I started feeling guilty for not having used the card since so long. One day as I was going to meet Sikander at his regular Starbucks for coffee, I took the card with me. But I chickened out again and asked Sikander if he will go up to the cashier and pay for an extra coffee and leave the card with them. And he did. It took him some time to explain but they got it and we could see how excited they were as they showed the card to each other.

Later I found two more cards and we repeated the same at two different times. I go there often too and every time I would leave post-its with inspiring quotes for other guests to find or leave thank you notes with my empty mug on the counter. The baristas there are just super sweet and always smiling. We have a standard order of two coffees and a cookie and the baristas now know our favourites. One day we ordered our coffees and didn’t take a cookie, but soon after a warm cookie just came to our table! I was amazed and the barista said, it's a gift :). But only recently Sikander told me that ever since those first few SMILE coffees, he has had a tough time making them take money for his coffee. 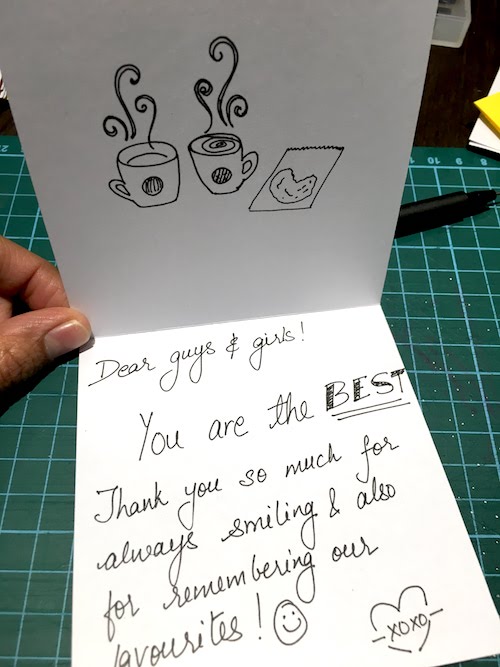 Sometimes they will swap their employee card and give him the 15% discount and a few of them would just not let him pay. He goes there everyday for his evening coffee and sometimes when he is sitting down with a colleague, they would also bring him cookies from the house!

It soon became a game which he could “win” only if there was a queue behind him and he would refuse to leave until he has paid. It is just so much more than coffee over there.

But what happened last week was something completely unexpected! Two of our friends (Shan and Lina) were visiting us from India. One evening, we planned to meet at our usual Starbucks. And I thought with the four coffees, we will buy two more and leave the Smile cards. I told the idea of the cards to our friends as we walked to the cafe. After our order, Shan insisted on paying for it and he said it will be his very first anonymous act of kindness so I should let him and I did. But lo and behold! The cashier said, "it's done." I never thought they would do this with 6 coffees! We kept on arguing for him and since there was no queue, there was no hurry from his side too. Our friends were baffled! “What is this? We have never seen this happen at a coffeeshop!”

We left some money in the tip box and went to our tables. Shan later went back to the cashier and insisted that he should at least allow him to pay for the two smile card coffees and he just refused to move until the cashier (Alex) would accept. Finally he relented.

While having our coffees, we made some origami peace birds and left them all around the tables and also wrote a thank you notes on these printed art pieces for the baristas. 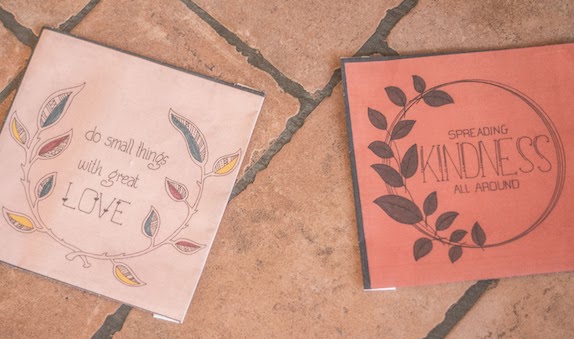 Shan had such excitement in his eyes as he kept looking at the cashier desk to see who gets the free coffee and what will their reaction be. Sometime back a girl came to us (Alex had told her it was us) and thanked him for the coffee and asked about the Smile card. We explained that to her but Shan is now ‘at it’ because he said, "it didn't stay anonymous so I have to do more! " :-)

And while Shan is planning his next pay-it-forward SMILE card act, I am thinking how do we step up our game to pay-it-back to those amazing baristas. Is that allowed? :-)