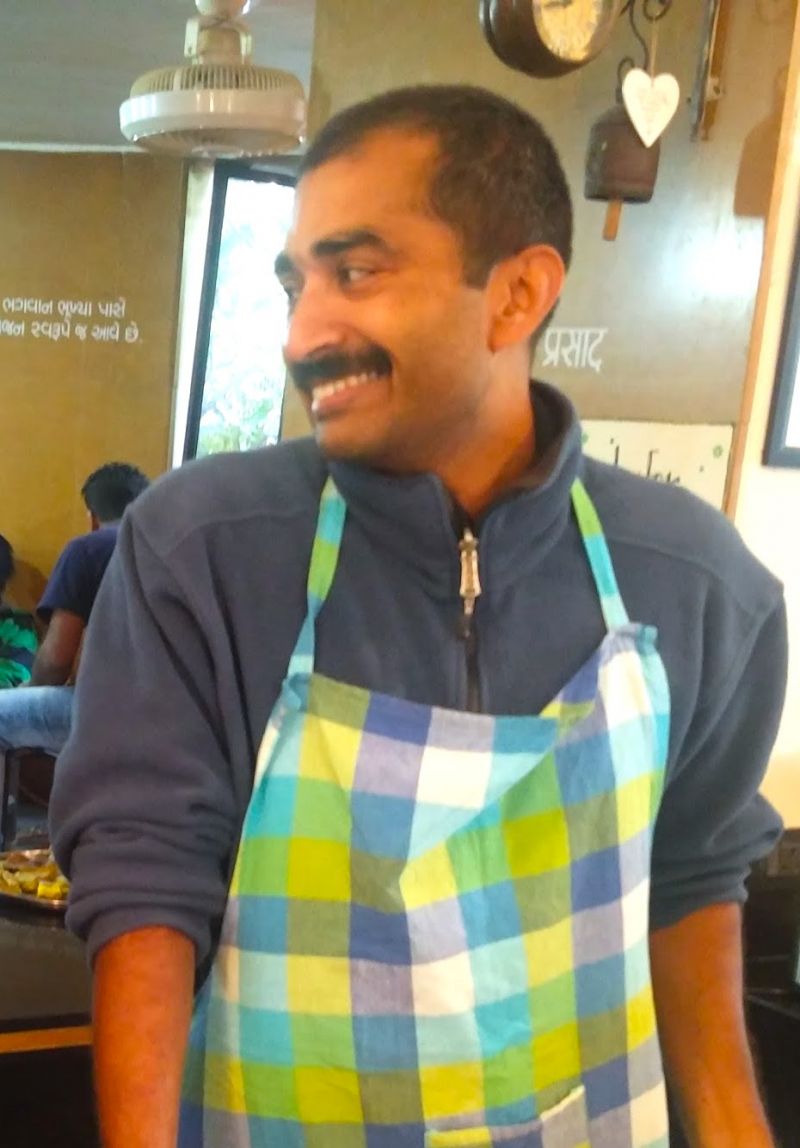 [All through the Gandhi 3.0 retreat, Lijo Chacko was serving us invisibly. How many of you would believe, if you met him on the road and he told you that he climbed Mount Everest, that too, on the north face? One out of 10 people who climb Mt Everest choose to attempt the North face. And he did it without much preparation, just like that. He's a humble spirit, but he also has an adventurous spirit. He's been a commander in the Indian Navy serving in submarines. Talk about transition and transformation. Below is a transcript of Lijo sharing that story in his own words.]

In my late teens I got selected into the Indian Navy. I joined the Naval Academy, then moved onto the Naval College of Engineering to do my graduation, got commissioned and then specialized in Marine Engineering a few years later. In the Indian Navy, there are three special Cadres: One is the Marine Commandos, another the Pilots and the third, the Submarine Cadre. A risky Cadre, but once in a while, we used to consider ourselves elite too! It takes about 1-1.5 years of training until you get a badge similar to that of the pilots. The pilots wear a badge which they call the 'Wings'. The Submariners wear a badge which is called the 'Dolphins' (which is pinned to the left side of your chest, close to your heart).

Wearing the 'Dolphins,' when you proudly come on board a submarine, you are told that you're one of the lowest forms of marine life. :) And that is when you were thinking that you are qualified to operate a submarine! Then comes this grueling preparation for a qualification called the 'dived watch keeping ticket'. It’s only when you qualify that, that you are allowed to be ‘on watch’ independently in the Control Room, and everybody else can go to sleep if they want. When I was to take my "dived-watch keeping ticket" test, I was made to sail on a submarine other than the one I was borne in.

When I came onboard the submarine, the commanding officer said, "This is a short sortie, just going out for five days. Tomorrow onwards you will not sleep for 72 hours and will remain in the control room. At the end of the 72 hours, we will put the entire submarine into action stations and you will be assessed".

At the end of 72 hours, I really could not have sat down anywhere. If I sat anywhere, I would have knocked off! So that's how I got my dive ticket, and then went on to operate 6 attack submarines over 11-12 years.

I had a chance to go to Russia to operate close to the Arctic circle, staying in a restricted Russian nuclear submarine base and town for a couple of years. And I got a girl (who is now my wife) also from there. :)

I was lucky, that the Navy gave me a chance to climb -- or rather, crawl up -- Mount Everest. I was just at the right place at the right time. The team had been preparing for two years, but I joined the team in December 2003, just six months before the actual ascent. There was a circular in the Navy saying that anybody who had secured an 'A' certificate in a Basic Mountaineering Course could try their luck at getting into the team. I applied and we went to Siachen and then Eastern Ladakh as part of the training-cum-selection. We trained at the Siachen Battle School with the Indian Army too. There was a stringent selection process, and somehow I got through. Thirteen of us went. Six of us were climbers, I was also one of them. North Face is tough, but we somehow made it.

There were 17 people, who climbed from the North Side that year, who couldn’t make it back.

When we speak about nature, we do say that it’s a humbling experience to accost it. But when you go onto such hostile terrains, it's doubly humbling.

Winds can actually blow you off your feet.

This morning, I was sharing with someone that when you see a beautiful picture of Everest with a plume on top, that's the time you just cannot climb Everest. Also, like many of the things that we do in life, we don’t get to the goal in a single shot, we climb Everest two-thirds and come back all the way down. And we wait. We just wait, to get that one week weather window. Once the Met department tells us that Everest is clear, we just take our stuff, scramble up, and come back safe.

I remember this story of a priest, an old timer, who had climbed Everest. He was asked, "So how does it feel to conquer Everest?"

He responded, "Oh nobody conquers Everest! Everest just allows you to crawl on it, somehow reach on top, and return home safely."

I remember the climb from Camp II to Camp III: one could take only three steps at a time. I would speak to myself, "One, two, three, stop. One, two, three stop”.

Before reaching that height, when we had a little more of energy, we would at least joke around, but after a certain height we really didn’t have much energy to spare. There was a time when, at every step, I would say "go back, go back, go back." :)

After the Navy, I went into the social sector.

It was not at all difficult for me to move into this space. I will come to a small poem at the end of this, which could perhaps explain why it was not difficult. When I was young, maybe 20 years ago, I remember seeing a BBC documentary. It had footage of a lady somewhere in Africa, I don't remember exactly where, though. In the footage, we see that there are three children huddled in one corner on the floor, and she had a stove on top of a platform, where the children could not reach, and she was boiling water. The camera zooms into the vessel and then even the interpreter and the cameraman both are shocked at what they see!

There were only three stones in it. She was boiling stones!

They ask her, "What are you doing?"

The cameraman then asks, "So what is this going on?"

Another story which has stayed long with me is one narrated by a family friend. He was put in jail for two years: Dr. Binayak Sen. He once told a story of women in certain parts of India who pick up undigested grain from cow dung, wash it, and make the only meal of the day. These stories stayed with me. And so I knew that, physically, I wanted to be in the social space.

About a couple of years ago, I remember reading in a World Food Program website that about 20,000 people die every single day of hunger related causes. I don't know whether we understand the magnitude of it, whether we can visualize 20,000 dead bodies in front of us. I would like to discount the figure a bit, let's make it say, 15,000. The Malaysian airline which crashed a few years ago had approximately 300 people on board. Simple math tells us that that’s fifty airline crashes every day. If you had one airline crash every day you would not have rested easy. You would not have given a peaceful time to your government either. But, in this case, we are somehow able to ignore the statistics.

It was a pretty easy call to me, to move into this place. I am not really focused on any particular sector. Though there are many people who are doing that.

My argument to myself is that "Okay, so they have a million dollars. They are working towards education, but there are hungry people, too." In our small ways, some of us try to feed them. I wouldn't want to see them as collateral damage because one wanted the nation to be educated fully. So I do my small bit.

I help of a few NGOs and also try to support the work of the Right to Food Campaign once in a while doing 'Inquilab Zindabad’ :) It gives me a high, so I just go on with that :)

Sometimes, when I used get a high when in the submarines, I would recollect reading this quote by Einstein, which I had written down on the front page of my submarine manual. It goes something like, "A man who marches in line and rank to the sound of drums falls below my contempt. He got this brain by default, the spinal cord should have been sufficient."

So I tell myself that, that's what we are, the military people. Nothing more than that.

Whilst in the military, I have tried to grapple with one major question: What or who gives us the mandate to kill?

I was in a submarine so we could fire torpedoes and missiles. Torpedoes would go and hit ships. Ships would carry 200-300 people. We were ready to destroy them. We were ready to kill them. We may not be seeing bloodshed; but we knew that that's what we were going to do. The submarine that we got modernized from Russia, was missile capable, a land attack missile.

What makes us kill?

Is it not okay?

Of course, when you're in the fauj [military], you're not allowed to discuss too much of politics and philosophy. So we would stop ourselves there and be satisfied by certain things, saying that, "Okay, if somebody gives you an order, and tells you to fire, you fire."

It is the Commanding Officer who is empowered by the Navy Act to order me to fire.

The Navy Act is passed by the Parliament. So the Parliament is telling Lijo Chacko to press the button. So he will and should do it.

So then I take consolation in the fact that probably the people of my country have told me to fire, so I fired.

And I do not know whether all of you knew that. I just wanted to leave you with that thought.

Like in many sessions, in the last few days, people have discussed, which are the organizations which can work towards making itself irrelevant or work towards its own dissolution. Maybe some forces like ours (the military), and the police force probably.

Here’s a part of a poem by Robert Frost that I wanted to quote:


My objective in living is to unite
My vocation and my avocation
As my two eyes make one in sight.
For only where love and need are one
And work is play for mortal stakes
Is the deed ever really done
For Heaven’s and the Future’s sakes.


So it's about making your vocation and avocation unite. And the line that I like the most is: "And work is play for mortal stakes".

Whether you are defending your country or trying to help alleviate or eradicate poverty, I think that's what it is: play for 'mortal stakes'.

Feb 20: Paula on 'Introducing Giftivism at the United Nations': "