[During our Gandhi 3.0 gathering in January, Teach for India founder, Shaheen Mistri, shared these three stirring stories of gratitude below -- on arranging shoes, a boy who played, and the quiet capacity of one grandson's heart to give. Originally posted Feb 25, 2018.]

We were at the ashram yesterday, and right outside Gandhiji's room, Jayeshbhai — with his normal big warm smile — said, "Chalo, Shaheen, let’s start arranging the chappals [shoes] in order!”

We started arranging the chappals, and my mind went back 20 years to my first Jayeshbhai encounter and story — a time when I brought a group of children from my organization, Akanksha, to Ahmedabad.

We were at the Gandhi Ashram. The kids were about to enter the ashram and they (as kids would be) took off their chappals, and they threw them here and there. Jayeshbhai just went and arranged all their chappals in a straight line. As I watched this, I remember thinking my instinct would have been to go and tell the kids to do it. But Jayeshbhai didn't do that. He just smiled and happily arranged them in a line, and then we went on and did our own thing.

After lunch, the kids came back to the ashram and again, kids being kids, they took off the chappals and they threw them everywhere. And, again, Jayeshbhai just came quietly and he arranged them in a straight line. Then, the next morning, we came back again and the kids were about to enter the ashram. They took off their chappals and they arranged them all in a straight line. Just like that.

I remember thinking: 'How incredible is that? Nobody said anything to them. Nobody told them what to do.' Somebody just cared about chappals looking nice and beautiful, and the kids learned.

I think, for me, that was the moment where I understood, in a very simple but very pure way, what it meant to “be the change”.

I remember in that moment thinking, ‘That’s how I want to be. I want to learn how to do that.” And so I feel great gratitude for Gandhiji, for Jayeshbhai, and for having an example of someone who doesn't just say, “everyone is my brother and sister,” but who actually lives that way.

I've had the chance to see and experience that over the last 20 years. I also think that my journey has been, many things. It’s been 27 years now of working with kids since I dropped out of college in the US and came back to India. As I sit here thinking about it, what these years have been — more than, perhaps, anything else — is lesson after lesson after lesson from my kids in ‘being the change’.

I'm here today, and some of our beautiful Teach for India alumni are here, and we were having dinner. We were remembering how, a few weeks ago, we had a very bad tragedy in one of our Ahmedabad homes. The home caught fire and our three young children saw their mother burn to death. And their father get very badly burned. I asked Alicia today, “How's the family doing?”

And he said, “The kids are doing well. They're back at school.”

I think they were back in school on day three after that happened.

I thought yesterday we spoke a little bit about what it means to be a survivor, what it means to be a leader. How we see that with our kids? A few months ago at our Pune site, one of our kids, who was 12 years-old, was playing on the terrace. He touched an electrical wire, got very badly electrocuted, and had to have his arm amputated just under the shoulder. I remember, a week later, going to visit him in the hospital thinking on my way: ‘What can you say to a child, who just lost his limb one week earlier?’

I entered the hospital room and his mother came. She grabbed me, and she kissed me, and she had so much gratitude. She said, “You know, for one week we haven't been alone. There's been a Teach for India fellow, round the clock.” The more she spoke, I was thinking more than a hundred people I think have come together to support this boy, Ramesh. He was sitting there playing Jenga and painting.

I thought how remarkable people can be. 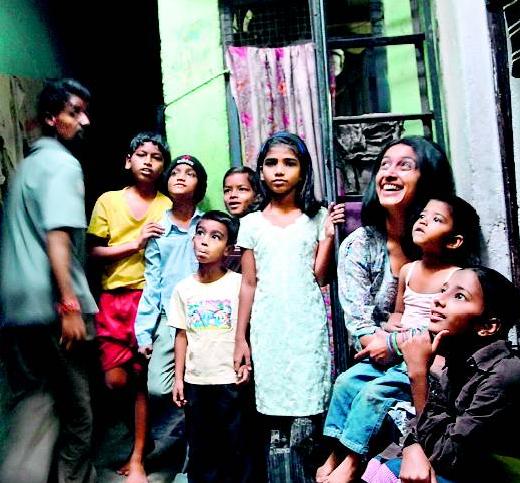 My last, example goes back many years ago. I had a student called Latif. They always tell you, as a teacher, not to have favorites. But Latif was my favorite. He was the kind of child who, when he walked into the room, the whole room just became brighter and happier. He was just good at everything. He was the star of our musical, he was handsome and smart and kind and this wonderful boy. I worked very closely with him because we were working on a big musical at that time.

His grandfather worked as a security guard. Just a few months later he (Latif) actually started working at a coffee shop. He was rehearsing for the play and attending college. His grandfather was able to stop working.

I remember I was driving on my way to a school, and I got a call from one of our teachers saying “Latif is very, very seriously ill.” I turned my car around, and by the time I reached back to Mumbai, he had passed away.

The next day I was sitting in his little home in the community with his grandfather, to whom Latif meant everything.

He said, “Didi, I knew Latif was really unwell. And I told him, ‘Don’t go to a government hospital. Take this 14,000 rupees,’ which was the money that his grandfather had saved up over many months. He put the money in Latif’s hand and told him to use it to go to a good doctor.

This child, Latif — because he loved his grandfather so much and he didn't want his grandfather to go back to work — took those 14,000 rupees and put it under the bed. He went to a local hospital and died less than 12 hours later.

I remember sitting there thinking, I always thought this was my work — the work of giving. That day, I felt that I had no idea of our human capacity to give. How truly limitless we are in our ability to really give.

So I wanted to say thank you, to my kids and my fellows and my alumni and all the people who have supported not just Teach for India or Akanksha, but all the children in this country.

And then, finally, I wanted to say a really, really heartfelt thank you to all of you; because, as I was sitting here looking around, I was thinking of what potential manifested looks like. I saw Ana and her creativity, Jayeshbhai and his compassion, Nipun and his brilliance, and Galia and her joy.

And when you're able to see glimpses of that in the people around you, it's so special, and it's so magical. And it is so worth fighting for and not sleeping for and sometimes not eating for. But doing it, hopefully, with a untiring mind until it reaches every single child in the country and across the world. Thank you.