[Grace Dammann is nothing short of a national treasure. :) Below is a transcript of her moving opening remarks from a Healing+T Retreat in February...]

When I was thinking about this yesterday when I was sitting in meditation, what came up for me was, "What, Grace, is your deepest intention?"

I don't know why that came up, but my deepest intention I can say, really, is to know the truth. And the truth is to live and serve. So that's just my truth. So I'm a physician. I began medical school when I was 35. I was really bored :), and I had done everything in my power to mess my life up, and I needed to in a proper way to grow up. :)

I asked my therapist -- whom of course I needed at that time -- "How do you decide how to grow up?"

She said, "Just sit on the edge of your bed, ask your heart what should I do?"

So I did that the next morning, and the heart said, "Go to medical school."

I said, "You have got to be kidding."

I was never a straight-A student. No way. But nonetheless, I heeded the instruction.

So I went to medical school, I went to UCSF. I was the oldest starting student in the state that year. And I graduated, I finished residency, when I was 42. It was right at the beginning of the AIDS epidemic. So I got to work with the AIDS epidemic, and I started. I stepped on Unit 5A, at San Francisco General, which was the world's premier facility for AIDS care. I started at Laguna Honda Hospital and we would admit 30 patients a month. And 15 of those 30 patients would die each month. I had no idea who was going to die, and who was going to live.

That's the definition of healing: If you're alive, you've been healed.

It's a weak definition, I know, but it's a very practical one. 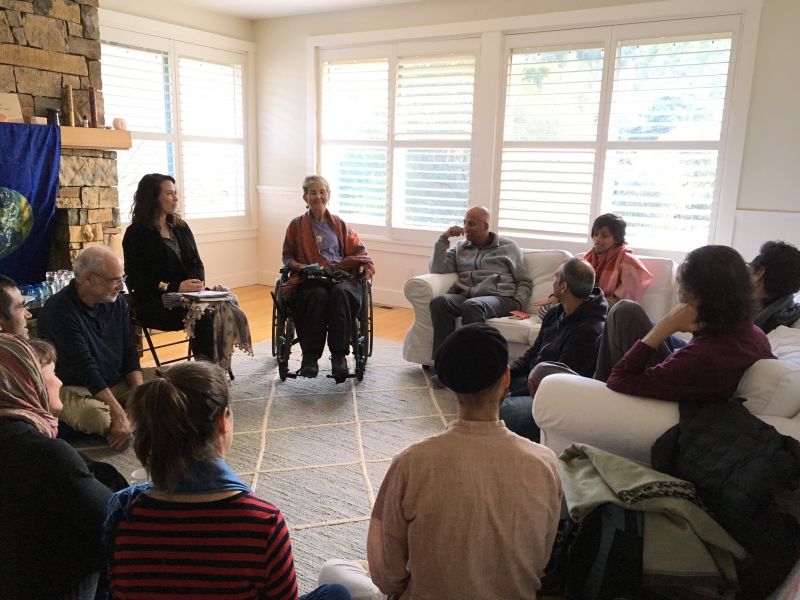 So after I signed 1,300 death certificates in about six years, I adopted a child who was HIV infected. I didn't know she was, but she'd been infected at birth. And so, it was too much. Because caretaking an infant, who at any point can die, all of her cohort group is dead. She's now twenty-six. She just graduated from Pitzer College, and lives in LA. She lives the high life. :) She's now in Santa Barbara, in a great house that looks out over the ocean. She's not anybody we feel sorry for at this point. She takes her meds every day. So I figure that is a true success.

Anyway, we were driving home one day, fast forward 10 years, over the Golden Gate Bridge. My daughter was talking about the French Revolution and feeding our dog a biscuit when lo and behold we were hit by a crossover bridgemate. My life changed in that moment; let's just put it that way.

I spent the next thirteen continuous months in the hospital. I was in the ICU for 40 days. It had 18 operations. I was incubated for three months, I was in a coma for two months. When I came out of that coma, I was blissed out, let's say. I was right here, in the present. I mean, I loved feeling water on my hair. I loved the first bite of food that I got three months after the accident. I loved it. And I love not having to be cleaned up. And I loved getting to move my arm.

I was in that state for about two years, until I went home.

Then I got totally bored.

I thought, 'Oh my God.' Once again, I had to ask myself: "What is my deepest intention?" And I thought, 'If I don't get a job, I'm gonna die. I am really going to die. I'm so bored.' I was watching West Wing and Grey's Anatomy re-runs. And I watched each of those about 10 times. I knew it all line by line. So I finally convinced my physician right off the bat to go back to work, even though I had three bad brain bleeds in my head. At any time I had to have an MRI, I'd think, 'Oh my God, the lawyers that would see this will not want to represent my practice.'

But they said, "Yes, you can come back and work as a pain physician."

And I thought, 'Oh no, not a pain physician. That is really miserable work.'

But I decided I would sleep on it, because by that time I was less impulsive. I was less under the impact of TBI (Traumatic Brain Injury) effects. I had much better executive brain function, not perfect, but much better.

I would sleep on it for a night. My mother always told me to do that. I never listened to her, but nonetheless, I've slept on it. And I told myself, "Just say yes. That's your other mantra. Just say yes."

So I just said yes.

And I went to work. I brought together a team, but I decided -- or I'd learned a couple of things from having been a patient. Let me go through those, because I think they're really important.

What I'd learned as a physician, and as a patient, was that you've got to have a life purpose. Without a life purpose, you might as well kill yourself. Seriously.

As a physician, I learned that my most important job was to be happy at work. Because the only thing that heals people are happy, healthy care providers. And that wasn't easy to do in this healthcare environment. And my job as the team leader was to create health -- to make sure that my team was as happy as possible.

And I will leave it at that.

---
More on Grace's remarkable journey in Richard's stirring interview: A Conversation with Grace Dammann: Before and After.