At the Gandhi 3.0 retreat, we had a small "Secret Service" team, whose job was to figure out unsuspecting acts of kindness to make people's days. It's hard to determine the extent to which it made others smile, :) but it certainly made them incredibly happy to pour so much love into the smallest of things!

Two days after the retreat, a final assignment arrived -- Zilong! In gratitude for the deep inspiration he keeps sharing, we wondered if we could offer him a blessing for his journey ahead. But for someone who travels like a pilgrim and lives out of his back-pack, what can we possibly give?

Few of us started brainstorming, and quickly an idea emerged: 21-Day Zilong Challenge! We came up with 21 qualities about Zilong that inspires us (that was easy!), wrote a description of each, and crafted a hand-made diary. All who sign up would embark on a 21-day journey to "be the change" and pay forward his values into the world. Of course, we renamed the challenge :) ... 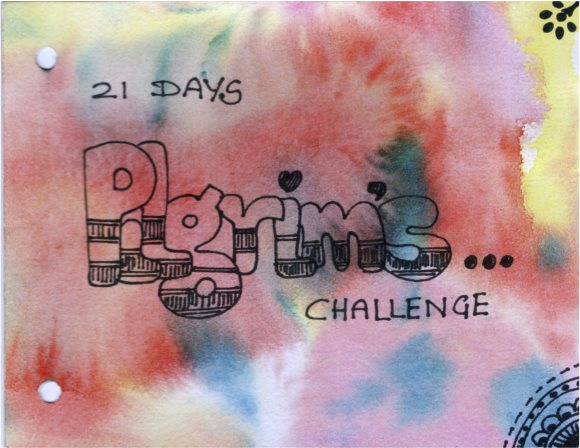 Everyday, we would get an email with an idea and a description. Our task is to practice it that day, and post a reflection on our group feed. In fact, it was one such 21-day kindness challenge that had prompted Nimo's Empty Hands journey.

Here's an example idea, from this challenge: 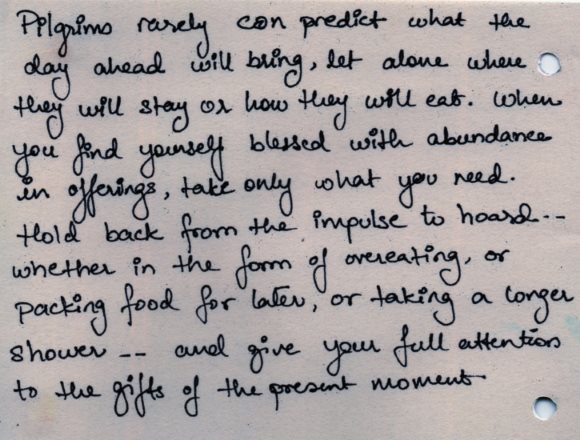 Each of the ideas has a very inspiring anecdote behind it. For instance, behind "honoring your lineage", here's this story that Zilong shared at an Awakin Circle one time:

People ask me, "Is change really possible?" I say, "Yeah. Look at my dad."

When I first had this thought -- "Ride your bike back to China" -- my ego resisted the idea. All the dreams that I had, that my parents had, my grandparents had, they all had to die. They worked hard their whole life to send me to study in the US. Now, I'm telling them I'm coming back with nothing on a bicycle. They have a bicycle their whole lives but they wanted to buy a car or buy a house and send their kids to America. So my ego didn't want this pilgrimage.

And now the extremely difficult task of explaining this to my parents.

I Skyped with them, and tried to explain. My Dad was immediately turned off. He raised his voice and said, "What? You're being irresponsible! You're too young. You don't know what you're doing." I said, "Dad, I have to call back in a few minutes."

I hung up and cried for ten minutes straight, because I've been very close to my family all along. I had hurt their feelings, and I was afraid that for the rest of the journey I would have to travel without their support.

Then came one of the most moving stories of transformation that I've witnessed.

Somehow my Dad went from saying, "You're in the heart of Silicon Valley. Learn about artificial intelligence. Learn about biotech." to "If it makes you happy to do this, go do it." He accepted it, but still was quite suspicious. I didn't have any shared context around this to tell him that meditation is the most advanced biotech that I have ever encountered, that there is wisdom far beyond the reaches of artificial intelligence.

Then, November 2016. My Dad sat for 20 minutes of meditation. First time ever. He came out and said, "Truth is hard to encounter. Life isn't permanent, and I may die tomorrow. I shall not delay, sign me up for a meditation retreat." He went to a 10-day Vipassana retreat, and for six months after that, he constantly served and sat courses. Always, nonstop. He quit his job, quit smoking, quit drinking, became a vegetarian. He's actually been living like a monk for most of the past year. Soon enough, he served a thirty day meditation retreat.

It has just brought the most profound change in his life. Now I no longer need to explain anything to him.

When people ask him, what prompted him to go to meditation and triggered his 180 degree turn, he says, "My son, my only-son, never did house-work his whole life. But after meditation, now when he comes home, he voluntarily does the dishes. So, I thought, this meditating must not be that bad."

I've been trying to wash dishes everywhere I go, because I have so much debt to repay. If that joke is even one percent true, I will commit to do dishes my whole life.


It was only fitting to start the challenge on February 16th, Chinese New Year.

We would love for you to join here:
http://www.kindspring.org/challenge/join/1603

Smiles From 39 Members Login to Add a Smile