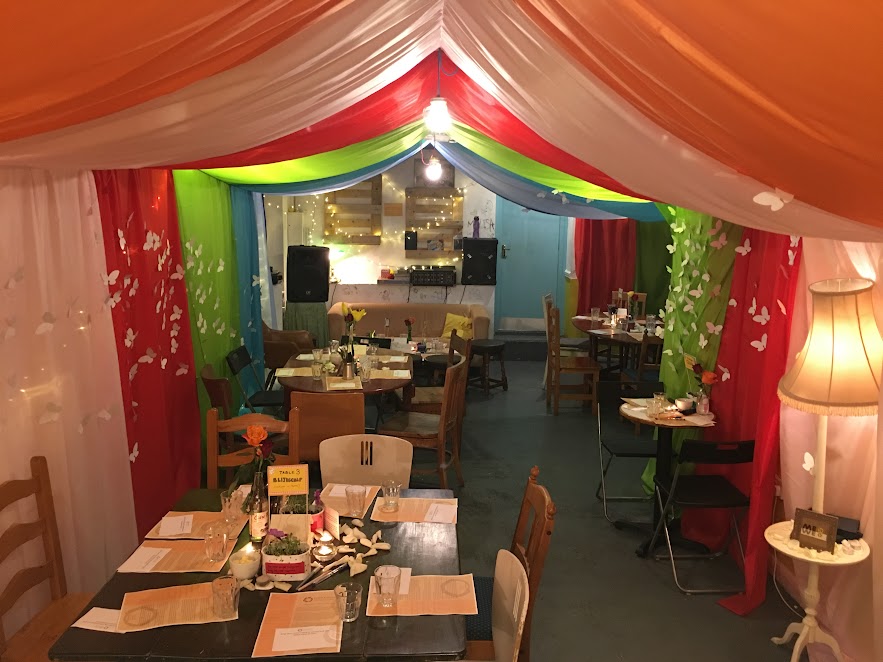 It is beautiful and heart-warning to witness again and again how simply holding space for an intention in unconditional generosity can move different people to tap into the inherent well of generosity which is deep in all our hearts to serve others and give of ourselves in creative and inspiring ways. Last week's Pop-Up Karma Kitchen was a heart opening experiment which took place at London's first "Happy Cafe", The Canvas Cafe. We were warmly invited back by Ruth, the owner -- who is wonderfully experimenting with generosity with ways in which the Cafe space can be utilised as a blank Canvas to bring about positive social change -- to be part of the Canvas Cafe's Summer of Change Festival.

A spirited team of almost 20 volunteers, (with a wait-list of 12 others) -- almost all of whom had never served or dined at Karma Kitchen before -- dived in to align head and hands with their heart , in the lead up and on the actual day o co-create a wonderful and magical experience! Abundant offerings poured in to help with preparations, from making embossed volunteer name tags, vegan dessert offerings of banana cake, chocolate brownies, raw carrot and beetroot cake :), yoga stretch energizers, bringing flowers, menu designing/printing and cutting as well as a stunning collection of table name signs with the word "Kindness" in different languages on one side and with kindness quotes on the other side planted carefully in individual decorated pots containing sprouting watercress.

A couple of volunteers, Chi and Trishna, had invisibly helped with behind the scenes preparations, even though they would not be there at the event itself. Chi was going to be at a private Museum of Happiness retreat that day, little did she know that the retreat participants would be coming for dinner at Karma Kitchen that evening -- to be served with Love -- a heartfelt reflection followed "about the importance of being able to receive from others in the unconditional way we try to give". 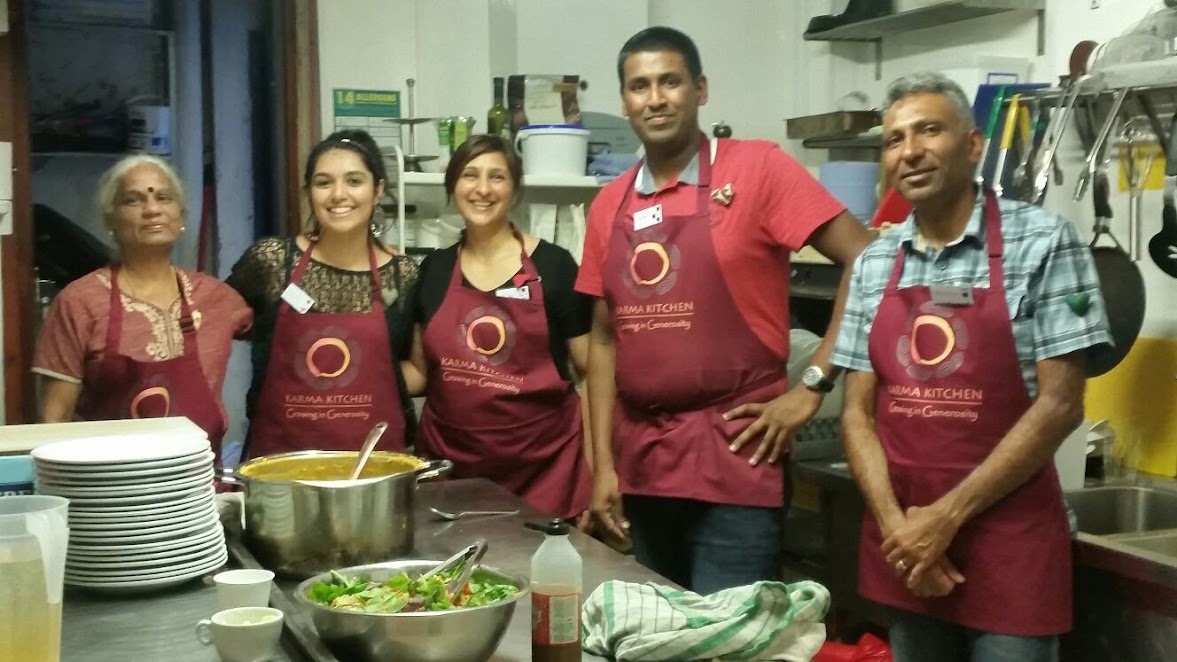 One volunteer, Vijay, happens to be Head Chef of at
Aubaine, Hyde Park , a fine French restaurant, after being a dinner guest with his wife and son at the previous event in March, had committed back then of his wish to cook at the next Karma Kitchen event. An ankle injury and a newborn son did not stand in the way of his spirit to serve, and offer his creative gift to cook a full Indian meal for 100 people. Along with Lalita Aunty, who had wanted to serve alongside her son-in-law, they nourished all of us by infusing much love into the food... as well as spoiling all the diners with abundant offerings of Aubaine's renown sour dough bread and mille fuielle dessert pastries.

Sitting in circle an hour before the doors were to open for the first of two sittings, sharing our intention to be there that evening, it hardly felt like most of us had met for the first time only an hour or so before then. There was an invisible thread of connection and bond, in our common intention to give of ourselves, wholeheartedly. This had become quite visible in the strong seamless teamwork as everybody effortlessly set up the physical space to create a magical ambience of twinkling lights and butterflies and flowers, and an invisible field of loving kindness.

From My Heart To Yours... 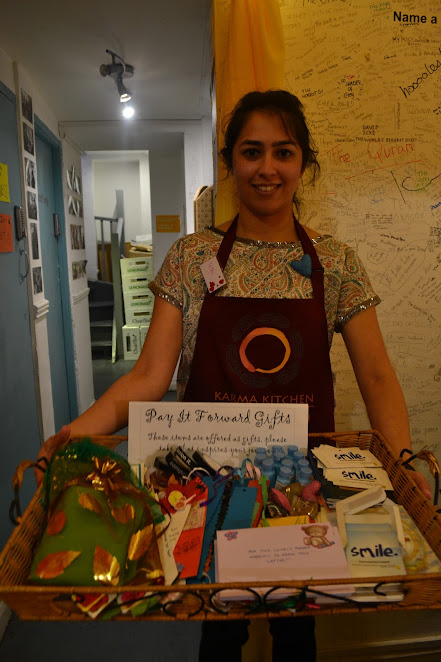 The heart finds a way to serve. A few diners had written in, with their intention to serve in a subtle, yet powerful way, offering thoughtful gifts for the kindness basket -- a basket of gifts and handmade-with -love offerings for diners. One diner had written 10 anonymous Love Letters for guests, and in a follow up email wrote this beautiful expression of their experience of writing these letters they call From My Heart To Yours.The basket overflowed with other gifts, some of which we knew not who had gifted. Such as carefully wrapped tea lights in holders, each with a poem on "Simply Bring". There were even dozens of folded paper heart pockets, with handwritten messages -- kind and thoughtful offerings from the 12 souls bubbling with happiness who had handmade these earlier that afternoon during their Museum of Happiness Retreat! :) 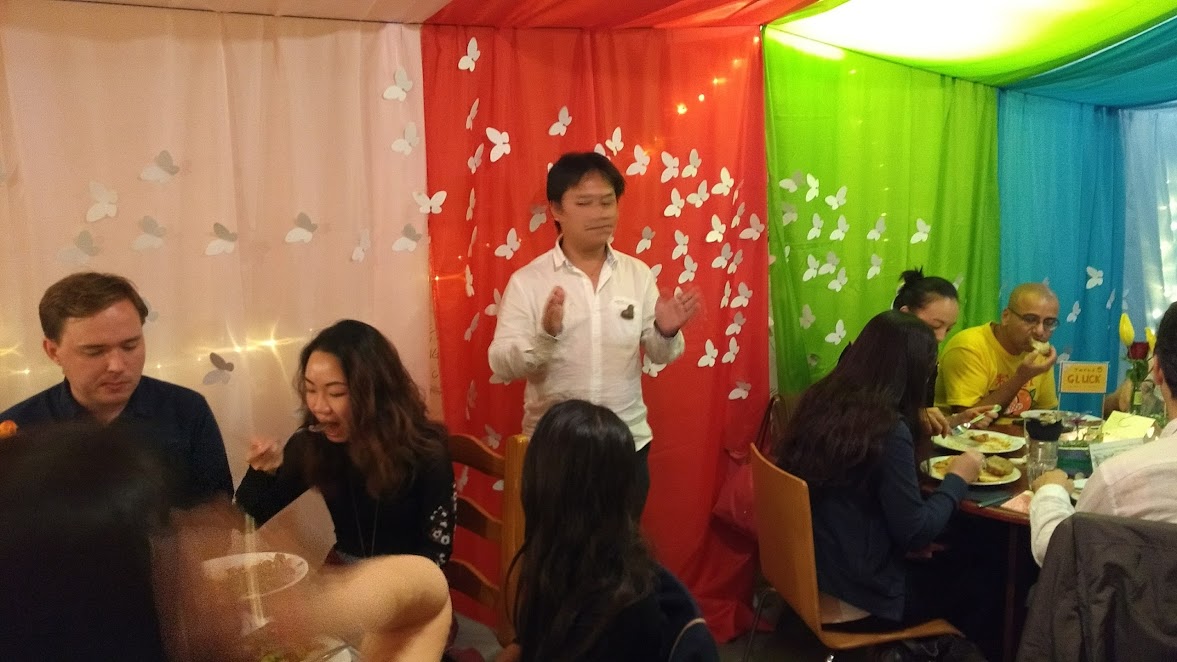 The theme of the evening was on Connection and Community.
It is always both inspiring and humbling to listen to artist Milan Rai, share stories from his personal journey in service -- of how the White Butterfly, an initiative offered on a gift economy basis, connects people from all walks of life across borders around the globe. installation of which adorned the sides of the rainbow coloured tented space.

Serendipity arises in beautiful ways. Diners were invited to write reflections on what connecting with themselves and others means for them and in the spirit of sharing a few of the reflections were read out by volunteers. One diner came looking for Nilesh, one of the volunteers who had read a few of these out. As they met with big hugs and even bigger smiles in the kitchen, we learned they had reconnected after 7 years! 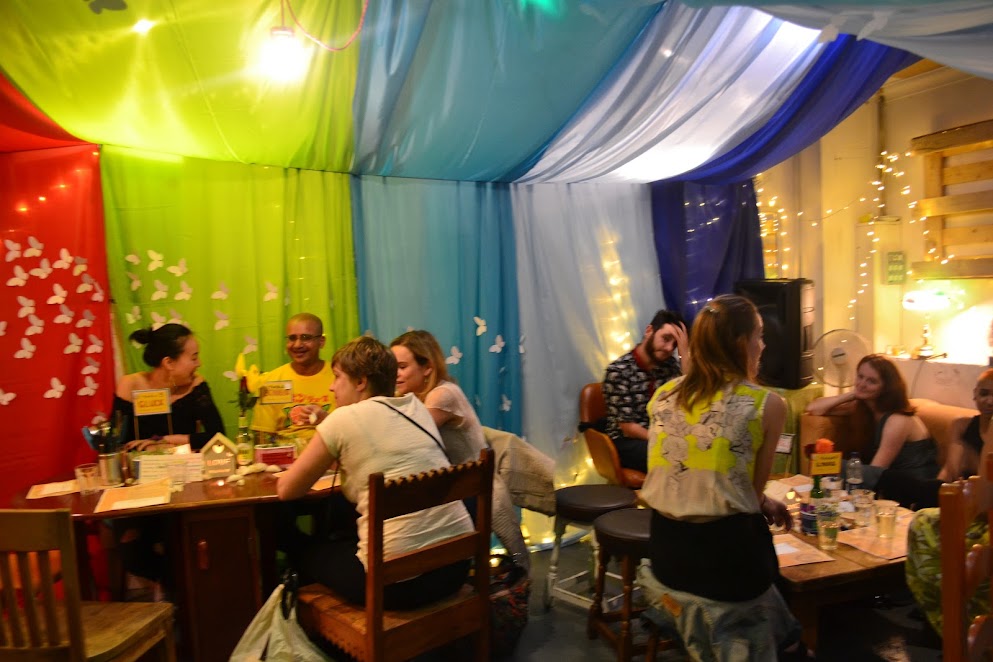 An environment of unconditional generosity can melt the barriers that separate, it can be a fertile space for the blossoming of micro moments of beauty and connection between strangers. One such highlight was in the second sitting, when 3 Spanish diners, Joserra, Miki and David, who were in London for the Museum of Happiness retreat that weekend, had insisted they wanted to sit separately from the group of retreat participants. On noticing that one couple were on a table of two by themselves, David gently walks over to invite them to join their larger group of 6 people, also offering to bring a chair over if they wished to have his company, or of course if they preferred to, could continue with an intimate evening. Of course, who could refuse such a noble invitation, in a few seconds they were all, all 8 people, sitting cozily, joining hands in a prayer before their meal. :)

Many many hugs and group hugs and more hugs later, everybody gathered around for one more massive group hug and "family" photo, before joining in for one final team effort to clear up and put things right again in the space, ready for the following day, the final day of the Canvas' Festival.

Deeply grateful to Amar, who co-anchored, to the grounded volunteer team who simply melted into roles, filling in any gaps, carrying out tasks with so much joy. The experience allowed a seed to be planted for many. A seed of how generosity can shift our inner lens, whether in a Karma Kitchen or any other context, how it can help us be the change and create change around us. 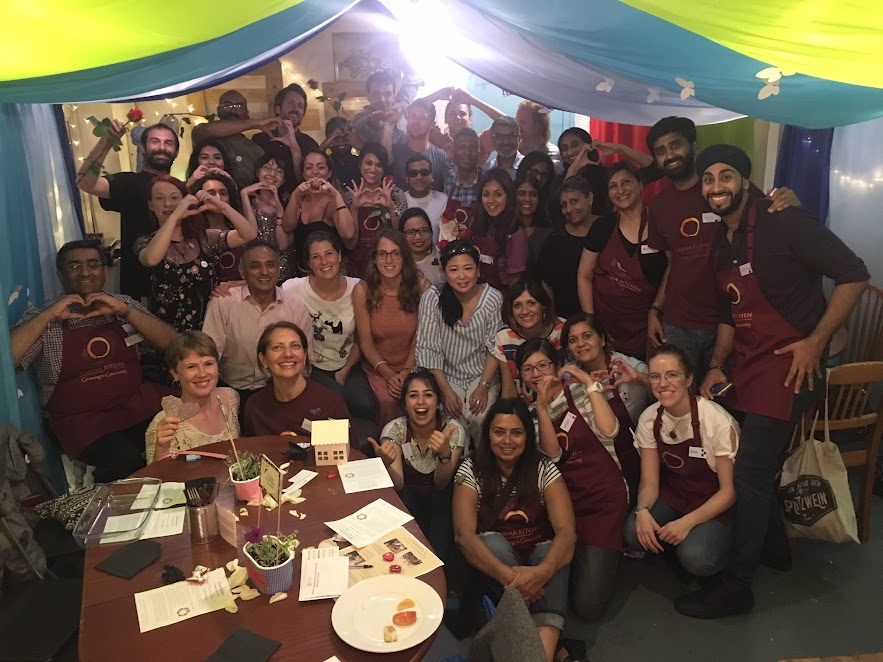 And a separate note of thanks to Tejal, Nehal and Tasvi, our camera crew and young volunteers for putting together this montage of video clips and photos on their phones and creating an album of Highlights gHighlights