Last Spring, it was Week 3 of our Laddership Circle and the theme we were exploring and experimenting around was 'Holding Space'. Incidentally, during that week, a crew of us held our last Letter Earthlings event in Dubai. Here, volunteers gather to write letters of love and kindness to strangers going through a tough time or to simply reach out to them in appreciation. Chandni and I had intentioned to hold space and were occupied speaking to first timers about what the intent behind the event was and how it all works.

There came a volunteer who had arrived with his girlfriend (one could tell that he was forced to be there :)), and he suddenly said, “This is something I’ve never done, and this is not something I'd do.”

I remember being caught off guard when he said that and thinking to myself, 'Hmmm how do I respond to this?' And the next second, I thought, 'It’s okay, just hold space and flow, just see what happens and give him a chance.' 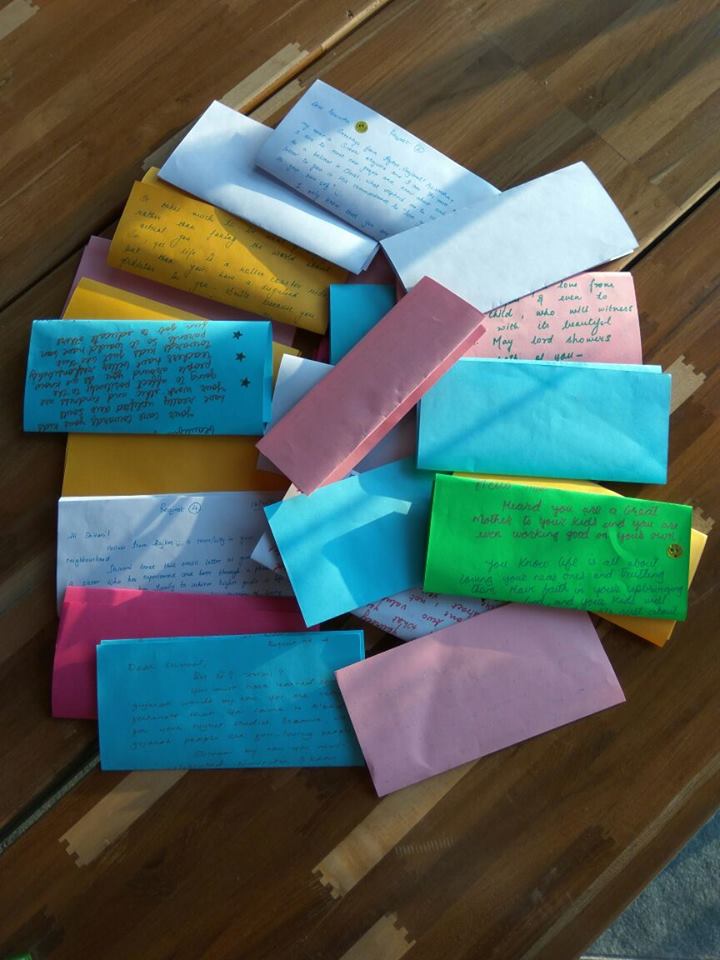 A while later, he said to me, “Well, I don’t know how to express in words, I’m just going to try to express with my art." He showed me this amazing doodle of the London skyline that he had drawn for the recipient -- a stranger who'd recently moved to London and was pained by the separation from his family. It was beautiful to see what shifted in this participant in that one hour, from downright rejecting the idea and refusing to engage to expressing himself with his beautiful drawings. He then went on to share how he thought about the time when he himself moved out of home -- the feeling had hit home for him and similar emotions had surfaced.

It was amazing to see what emerges when we let go of control, tune into our own hearts and hold space for others to tune into theirs :)

Another instance of 'tuning into the heart' occurred at our recent Kindness Confetti event in Pune where we took to the streets to perform random acts of kindness for passer-by's. There was one particular kindness warrior, P, who held a board that read "Everything is going to be okay" and stood at a busy junction. The reactions he received were absolutely priceless and heartwarming :)

We wrapped the day with a circle of sharing where P confided in all of us and shared that he was going through a tough break-up from a 7-year-long relationship, and had to muster up all the courage he had to attend this event that day. He went on to share that while he held that board, he held space for himself to heal and that the smiles from strangers reassured him that everything indeed was going to be okay :)

Jun 02: NimraSimra on 'I recently was invited to ': "This is very educational content and written...

Jun 02: sunglasses for men on 'Prasad Kaipa: Shifting from Smart to Wise': "“Since there are no compression straps, there...

Jun 02: sunglasses for men on 'The following quote founds its ': "“Since there are no compression straps, there...

Jun 02: sunglasses for men on 'Smiling In Jerusalem': "“Since there are no compression straps, there...

Jun 02: sunglasses for men on 'Yuka Brings ServiceSpace Posse to Japan': "“Since there are no compression straps, there...