[In December 2016, we held our second Awakin Talks event at a local school auditorium in Mumbai. It brought together communities from our various local Awakin Circles and featured four remarkable speaker. Our last speaker was none other than Sister Lucy. Below is her happy photo with Swara, followed by Rahul's remarkable introduction, and a video of her talk. She moved us far beyond words, despite using a language she doesn't speak fluently. We love you, Sister Lucy!] 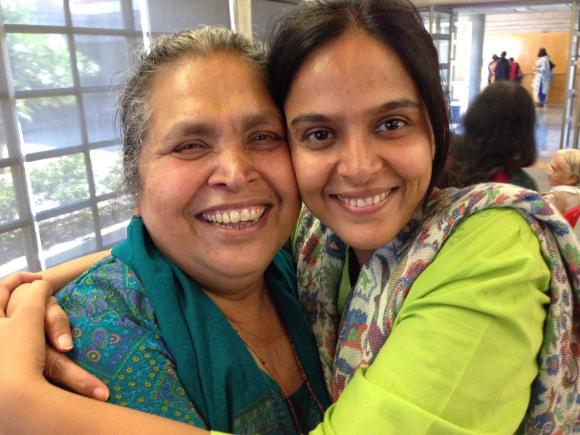 Rahul's Introduction: Sister Lucy, founder of Maher, was born in Kerala. At the age of 12, she moved to Mumbai. When she moved here, she saw the sight that you and I see everyday -- the slums of Dharavi. They had an impact on her that they don't have on you and I, despite of the fact that we see it everyday. She was deeply moved by what she saw there. The poverty, the dirt, people defecating in the open and more. She decided she needs to do something about it. Her calling led her towards becoming a nun by the age of 19.

As a part of that congregation, she had a life altering experience. In 1991, a 7-month preg nant woman came to her doorstep for help. With tears in her eyes, "She said her chronically alcoholic husband threatened to beat her to death." Sr. Lucy was a junior in that organization and did not have the authority to offer help then, so kindly told her, "Please come tomorrow and I will make arrangements for you." That very night, Sr. Lucy heard loud shreiks of pain. She ran out, only to see the same woman burnt to flames by her husband. Witnessing this experience, Sr. Lucy tried to rescue her but neither the woman nor her 7 month fetus could be saced.

This experience deeply moved her. She was angry, at her limited ability to serve others in this world full of darkness. "I want to do something to help, but I don't have anything," she approached her mentor, Father Anthony D'Mello, for advice. He told her, "It's not so that you don't have anything. You have love. And that love will inspire you to take the next step." So it was. One thing after another, she started Maher in the year 1997, 6 years after the gruesome incident. Maher means mother's home in Marathi. And she created the warmth of a mother's home for the destitute, homeless, children as well as women. That seed has become a big tree today and all of us can partake of its shade but behind it lies such small stories of deep transformation. Maher has 38 long and short stay homes. Short stay homes for people suffering from domestic violence, rape or unwed mothers. Long stay homes for children for those inflicted by HIV, for the old and mentally challenged. Almost a thousand street children and more than 320 destitute women are being served by these homes which are not just in Maharashtra but also in Kerala and Jharkhand now. But that is the details.

In spirit she retains her faith in the inherit goodness of human beings and her trust in god. She is an living example of interfaith harmony and our deep interconnections with each other as human beings. Although she is a part of a congregation, she does not wear the robes to be just like everyone else. Her homes contain holy books of all religions -- not just Bible but the Kuran and the Bhagvat Gita. These homes are just not religion free homes but caste free homes where people from all castes - the tribals, untouchables can come and sit on one table. So that's Sr. Lucy for you.

Lot more can be said about Sister Lucy, but I'll end with a story that one of my colleagues passed onto me. It so happened that a government permission was required and a few government officers landed at one of Maher's homes and they demanded for some under-the-table money to move forward with the approvals. Sr. Lucy would have none of it, but to engage them in dialogue, she just asked them, "How much do you want?" They mention a number and then they went back to the gathering of the destitute women and kids in one of these homes where this meeting was happening. In true Sister Lucy fashion, with a loving care of a mother, she told the officer, "The amount you have quoted would require me take out 4 women and 6 of these kids and put them back on the streets. Can you tell me which ones you would like me to take out?" Within 3 weeks the government permission was with her. She didn't shame them, or embarass them, but gently and skilfully ignited their compassion for the future of these 4 women and 6 kids. She has helped awaken not just these officers, but so many others like you and I. Sister Lucy's work has garnered so many awards -- Nari Shakti award, Vanitha, Women of the Year in 2016, and so many more -- but lovingly, people call her, "Mother Teresa of Pune."