[Below is a lightly edited transcript of Sraddhalu-ji's talk at the Gandhi Ashram. I first heard him speak at an Education conference, many years ago, and was deeply inspired by his impeccable clarity of thought and vision -- and was thrilled that he was able to join the Gandhi 3.0 retreat.] 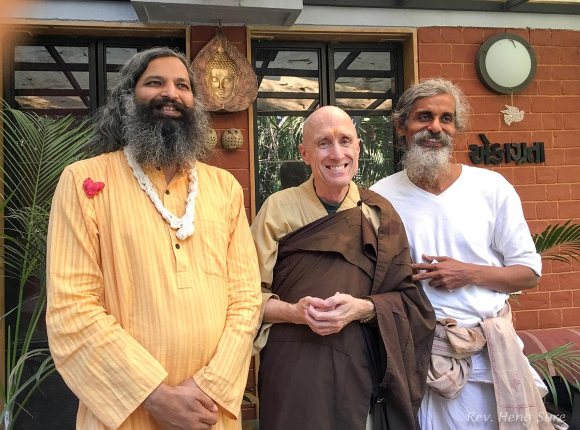 I thought I’d share with you something that has been truly precious for me. It's a perspective of the present situation in the world and our place in it.

Everywhere we look, there is massive breakdown and collapse of systems: political system are breaking down, economic structures are breaking down, the winners have become ineffective, and education is in crisis, society is fragmenting. Every day, several hundred species of flora and fauna go extinct. Nature’s ecological sustaining framework of life is undergoing such a rapid collapse that scientist have already declared it period of extinction – we’ve seen 6 such periods of extinction before, but this will be a human created extinction.

Under these circumstances, it was very easy to lose hope. It is also easy to make the mistake of trying to grasp at things which are breaking down, that leads to even more desperation. And here is the perspective I wanted to share with you, the perspective of inner strength as it is offered by Sri Aurobindo.

After modernism, we saw a post-modern era, and now we are beginning to enter the spiritual age. So, all around us, we see a massive collapse of old systems and a grassroots rise of a new world. If we grasp for the old world that is breaking down, it creates a lot of confusion. But we find that which is within us which is permanent, real and self-existent, it leads to clarity. All creative things have to break down but if we hold onto something that is always true – something within us – it can offer a key to surviving such a crisis. Not only that, it invites us to participate in the rebuilding of the new world.

In the old Indian tradition of Yoga, we see the analogy of musk. Deer who smell this perfume are attracted by it and start searching for it all over the forest. As he moves faster, he can’t smell it anymore. But once it is exhausted, it stops and starts smelling it again. It looks all over, but the smell actually is originating from within the deer.

The old forms that were created by reason and intellect are failing us now. In the new “sphere networks”, in the “many to many” connections, we are seeing the values of collaboration, of an underlying unity which want to express itself. All that we have been discussing the last few days. Even in the structure of the internet, this glue is evident. It can birth a new possibility, and broaden the span of our creativity.

The things we will try may fail because it’s never been done before but through that failure, we will learn to not just repeat the past but to walk in an unprecedented direction. Growing up in the Aurobindo Ashram, I remember Ms. Dmelo (the founder of the ashram) always saying, “Do not repeat what others are doing, do not repeat what was done in the past. Do the things which people cannot even imagine are possible.” That is what we have to try, to build a new future. In every way, and every details of our life of the community, we can give rise to new forms and patterns. As the new era dawns, the new spiritual age, the new golden age, the new “satya yuga”, that is our greatest challenge.

Whenever we feel helpless, incapable, or at a cross roads, we can turn deep within to remind ourselves of our connection to the divine presence. This is the frame work that has been, for me, the source of light, inspiration and strength -- that whatever the circumstance, whatever the difficulty, if we can turn to this support within we will always find our way.  The fragrance of musk comes from within.