[Joseph-ji is one of the greatest inspirations of my life, and I'm amazed that a man without a bank account, without a mobile phone, without email still manages to arrive just in time (from the Himalayas, typically!) for sacred circles like our Gandhi 3.0 retreat. He rarely speaks about his teacher, so it was privilege to hear him share on Day 2 of our gathering. Below is a transcript to carry the inspiration forward.]

I considered it to be the greatest blessing in my life was to come across my master. Because of him, I am who am I. My humble prostration to all the masters, the lineage of all the Guru-student traditions. The masters are the ones who transcends all duality, always operating from the core of the being, from absolute stillness.

Because I had the privilege of spending almost 18 months with my master, I saw what actually the master embodies in the life and teaches through his actions. I saw him in different situations of life always responding to what is, from the core of his being.

A master's door is always open -- all are welcome. I saw people with different ailments come to him, people with different mental problems. I remember an instance, when a young man was brought with both his legs and hands tied. People who brought him were quite afraid how to deal with him. Master goes near him, looks into his eyes and told the people untie him. Everyone said, "No! He is violent so he can do anything." But the Master untied him. He then asked him, "Have you had any food?" The young man said no, so the Master said, "Go and have some food in the kitchen, and come back and sleep here." Very obediently, the young man goes in the kitchen while the master asks his caregiver to return back to their village.

The next day, Master asks the young man, "What interests you?" He said painting. So he took him to a studio and tells him to start painting. That was his treatment!

When I read his autobiography, I remember an instance where he said he was traveling without any warm clothes, and was sleeping in front of a shop. It was *very* cold. Suddenly somebody came and slept with him, hugged him and then mutually shared the warmth. The next morning, he saw that a big dog had just walked away from him. It was a dog which came to give warmth to a man who was literally shivering with cold. 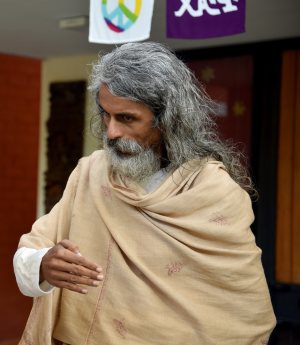 Personally I also had lot of encounters with him. Once, he called me and asked me to stay in the ashram. So I quit my job and I went to him. Traditionally, all new ashram guests go to him, he will instruct them what to do and how to go about it. As I went up, of course, I was nervous because he was a great man. And he didn't make any eye contact with me! On second day, I was again taken in front of him and again, no eye contact. When I went, he just turned away his head. Again, I began feeling nervous.

The head monk in-charge, who was also in-charge, told me that they only allow guests for three days. And so on the third day, I went to get an audience with him and again the same thing! I wondered, "What have I done? I quit my job, I left away everything and came here and he not even giving me eye contact."

I really cried that night. To add to it, my family was also upset with me that I had left my career.

Master used to go for a walk every day, and that last night I was there, he was coming back from his walk and I literally wanted to just go and punch him and let him know that he's ruined my life. He is walking towards me and I am just standing there nervous, angry, upset, miserable.

He stops in front of me and calls me. Then, he puts his hand in the pocket and takes out a key that happened to be the key of the library of the ashram. Handing it to me, he said, "Make sure it is not lost. The key and you."

That was the way he accepted me as an inmate into the ashram.

Following that, there were so many hundreds of encounters I have had with him in the 18 months of my life with him.

The ashram had 5 acres of land, mostly for farming. Master was often busy writing -- at any given time, he would writing five books in parallel; he would dictate one paragraph in one chapter on a particular day, and like that, it was his usual practice. He has written more than 200 books.

I thought, let me offer some service. The ashram had 5 acres of land, and plenty of water, so I made around six small plots to grow vegetables. Seeing my enthusiasm, the Master even got me a water pipe. For me, farming was my own sadhana (cultivation) -- watering the plants, taking care of the cows, handling manure and things like that. Beet roots, cabbage, carrots, everything was growing so beautifully.

More than a month passed, and I started feeling that time will soon come where I am going to feed all the ashram residents with these vegetables that “I” have grown.

One day early morning, I was about to pour water and much to my surprise, everything was gone! Nothing was left. It was just like a battlefield after the battle. Some wild rabbits had come and had eaten up all the vegetables!

This was a hilly place and just on the downward slope, there was the garden. When my Master went for his morning walk, he peeped in, saw what happened and asked, "Hey, why are you so sad?"

I knew it was time for a lesson, so I stayed silent. He said, "Do you know how happily the rabbits were feeling last night? They had no idea that they would have such a royal feast of tiny beautiful carrots, cauliflower and the flowering beans! For the last month and a half, you were preparing for a beautiful party for the wild rabbits and so you should be feeling happy for yourself."

The moment those words came from him, I felt something just melted away from the being.

Masters heal in such ways. India is a land that is privileged to have hundreds of masters like that who operates from the core of their being. They have no agendas of their own -- they just be and that stillness speaks through their actions.