[On Day 3 of our retreat, I shared Tom Callanan's parable from our Laddership Circle. Since several folks had dialogues around this, I thought I'd share it here again so the fifth-monk conversations can continue on. :)] 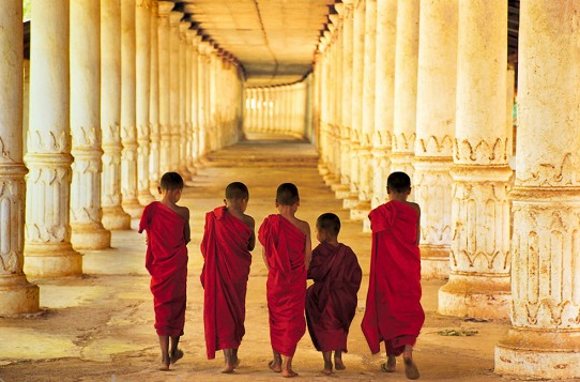 Once upon a time there were four young monks who, seeking enlightenment, sat on a riverbank meditating on world peace. Years passed in quiet contemplation.  One day a basket floated down the river with a crying baby inside.  The monks waded into the river and rescued the baby.  Soon, more baskets and babies appeared, and the monks were frantic with activity.  Suddenly, three of the monks walked away, leaving a single monk to her rescue efforts.

Months later, the flow of babies stopped and the second monk returned.  He explained that he’d walked upstream to a village where, due to overpopulation and famine, the babies were being released downstream.  There he had established an orphanage to care for the orphaned babies.  Happily, the problem appeared solved, and the two monks returned to meditation.

But soon thereafter the orphanage became overcrowded and the crisis recommenced.  Years later the problem mysteriously stopped again, and the third monk returned.  She explained that, in an effort to get at the deeper causes of overpopulation, she’d gone further upstream and established a successful family planning program. Convinced that the problem was now solved for good, the three monks returned to meditation.

Unfortunately, a few years later, a downturn in the economy and a conservative trend in government funding resulted in termination of the family planning program and the crisis returned.  Many years later, after much tumult and upset, and little meditation on the part of the monks, the problem once again mysteriously stopped, and the fourth monk returned.  He explained that overpopulation was just one of a complex set of interrelated issues.  He’d worked to bring together those involved with all the issues into a single, social and political movement for progressive change.  The movement elected into office a liberal coalition that began to provide funding and assistance to all the difficult issues. Happily, the problem appeared solved, and the four monks returned to meditation.

Tragically, four years later, the liberal coalition ran amuck of party politics and was voted from office by a conservative coalition that cut funding for all programs. The baby crisis returned, and it seemed worse than ever.  Or maybe it was just that the monks were now much older and weary from their years of effort.

In deep despair, the monks realized that they needed to transform themselves and their society in some very fundamental way— like a caterpillar changing into a butterfly. With little idea of how to begin, the monks invited groups of leaders to sit with them in contemplation and dialogue. Over time, a special type of relationship, spirit and collective wisdom emerged within the groups and between the groups and a higher power that they began to call “the fifth monk.” 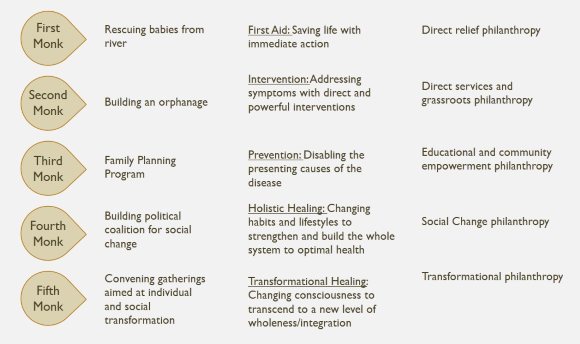 With her help and following her guidance, the groups began to catch glimpses of the butterfly within themselves and society.  These images began to form a new story about who they were and how they were to live together in new types of compassionate communities.  Simultaneously, new processes of healing and reconciliation emerged from their process that helped them let go of old wounds and patterns. This catalyzed a new spirit of innovation and hope that, step-by-step and year-by-year, helped build a fundamentally different society where the once inevitable and recurring problems of the past were now obsolete.

The four monks, now very old and gray, sat again by the river in quiet contemplation. 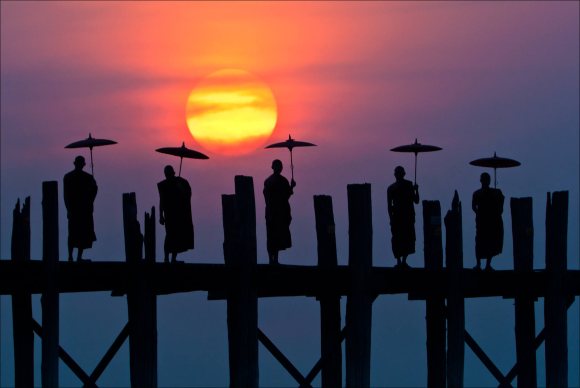