A couple months ago, my mother underwent a small surgery in her stomach. Before her hospitalization, Shaoli, my best friend from high school, also a doctor in that hospital, messaged me "Do not worry" and that she would be there for my mother. True. My sleepless nights on the opposite side of the Pacific could contribute little. And I definitely wasn't planning to fly over half of the globe to visit Mother; the following two weeks on my Google Calendar were already filled up with my normal busy-ness.

On the following day of her surgery, Mother said over the phone that she held Shaoli's hand in hers during the procedure. Suddenly, an urge to be at Mother's side stirred inside of me. The hand Mother wanted to hold was mine, but the Pacific is wide.

Mother's Story
Mother began school in her village at age 10 and she loved it. One day her teacher lost her voice and asked her to help teach the class. Standing in front of the class, Mother knew what she wanted to do when she grew up—a teacher like her father. Later when Grandfather asked her, his eldest daughter, to quit school to carry some family responsibilities at age 11, she begged, but her father wouldn't change his mind. She stayed in bed the next day, then the next, and the next. Her pillow was wet with her tears. On the fourth day, she got up, swept the floor, fed the pigs, and then carried two water barrels to the river. She never returned to school again.

When my brother and I were little, Mother said, “The only thing in the whole world you need to worry about is studying. I will do anything to support you going to school, even if I had to climb the mountain that’s sharp as a knife, or jump into the sea that’s full of fire!” She worked in the polluted fertilizer factory, while taking care of the crops in our small family field. During droughts, many nights she waited by the field for water to come through the irrigation pipe. I saw her cry.

When I was in the sixth grade, my father lost his job and later became sick. Mother has become the single breadwinner in our family ever since. She farmed, scavenged, worked in polluted factories and later on scaffolding in construction, sold vegetables and eggs on the street, and even sold her own blood for cash. Her hands were covered with calluses and cuts.

I appreciated Mother’s support of me going to school, but I never wanted her to come to my school in town because I didn’t want my classmates to see her, a peasant with a weathered face. Even during one of my visits from college, when Mother grabbed my hand in a crowded local store, I instantly pulled my hand away. Merely standing next to her in public shamed me. Now, she is one Pacific Ocean away; the long distance has brought us close.

As a lifelong servant, Mother not only supported her two children, my brother and me, going to college, but also served her parents, her younger siblings, her husband, and now, her grandson.

Going Home
My flight to China was supposed to transfer in Taipei to Shanghai, but due to bad weather, it landed in Osaka in Japan, where we were stranded for 10 hours. During the long hours at the airport, I received from a ServiceSpace friend the recording of my sharing at the Wednesday Awakin Circle the night before my China trip. What a sweet surprise. I again chewed on all the heartwarming wishes that I received from many in the circle that evening. This trip felt right.

It was 48 hours after my departure from the Bay Area before I arrived at my childhood home. I didn't tell Mother that I was coming. As I walked toward the open yard where my old home used to stand before it was demolished, I saw Mother checking on the vegetables in the yard. "Ma!" I called. She looked up and, for a moment, stood there looking at me as if I were some stranger before she ran to give me a joyful hug. Her energy was still low, but her heart was strong to survive my surprise visit.

My father has suffered from the Parkinson’s Disease for over 15 years, but he manages to take care of himself most of the time. In the past, he cooked while Mother sold vegetables on the street for their kids' tuition. It was lunch time. I devoured the rice and the eggplants and tofu dish, and drank up the soup in front of me. My parents sat there watching me, almost forgetting to eat their own meals. Mother was still on a liquid diet.

After the meal, Mother and I took a walk. I reached for her hand…

Reconnecting to the Land
I walked westward on the dirt road in front of my old home with my camera again. Through the camera lens, everything in front of me was surprisingly beautiful, the flowers Mother grew, the river with reflections of trees and houses, the trees and houses themselves, the little dog, the mother cat breastfeeding her kitten, and the run-down narrow bridge. 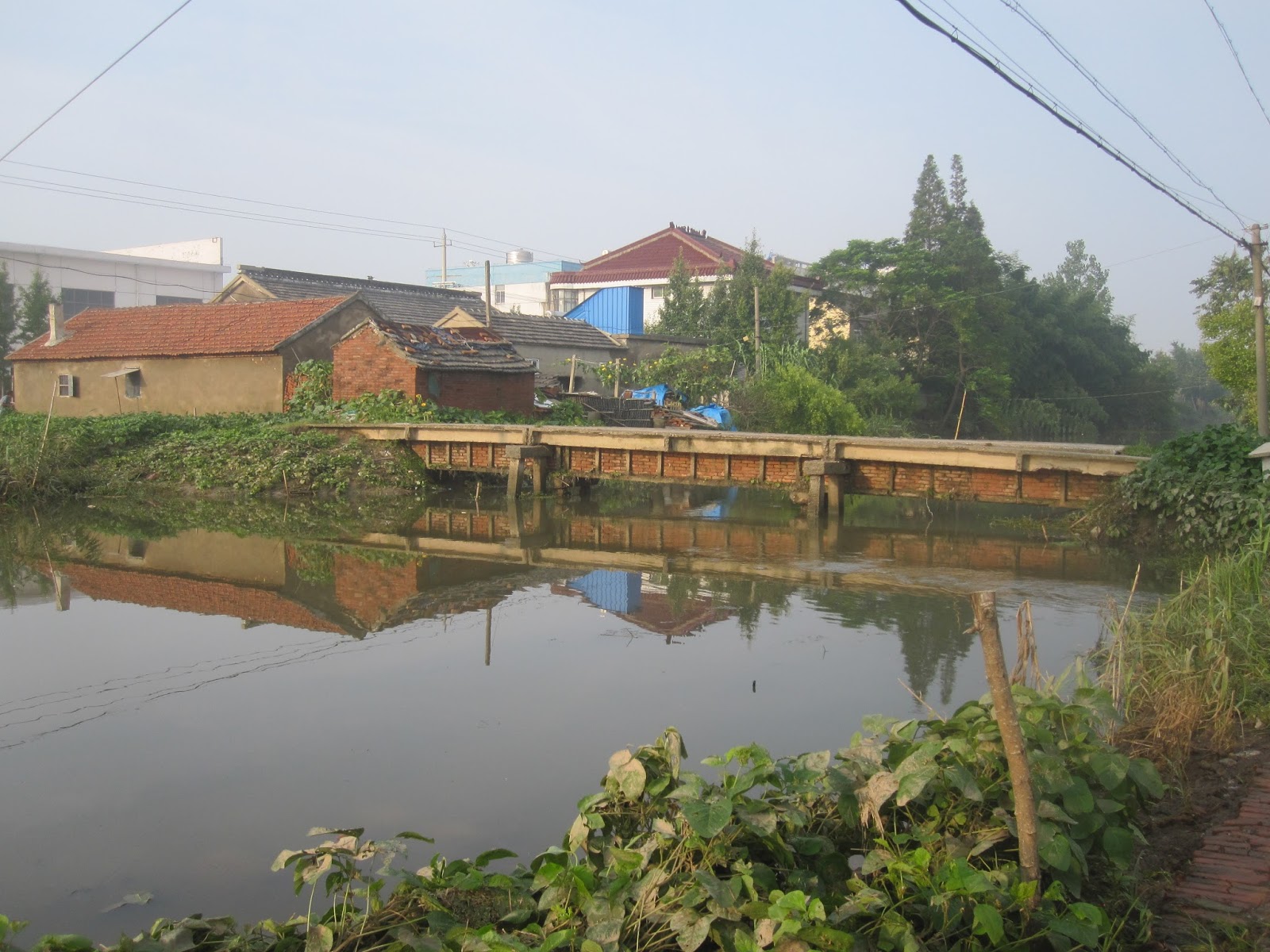 As I stood on the bridge which I’d walked numerous times as a child, something shifted in me. In the past decade, I felt angered and disgusted by the polluted river, the trash, and the funny smell in the air. I found the land repellent, even though the land didn’t do anything wrong. But that day when I stood on that run-down cement bridge looking at the shimmering surface of the river, I felt grateful for the first time, for everything that this land offered and sacrifices that she made.

I walked back home. My parents were cooking in the kitchen. Every day, Mother came up with a new dish that she wanted to make for me. She used to freeze all the special food that I’d missed, such as soy beans from spring, water chestnuts from fall, and the dumplings from the previous New Year’s dinner. She said if I ate them, it would be like I never left home. She stopped doing that after I said several times that I preferred eating fresh, not aged frozen food. That day when I got home after the walk, Mother was making zongzi, reed leaves wrapped sticky rice with red beans. To her, zongzi carries the spirit of reunion of the family. I stood outside, quietly observing my parents through the kitchen window. These two humble human beings brought me into this world and raised me from an infant, and supported me until I was able to explore this life on my own. How incredible!

Departure Again
When I told Mother my departure date, her lips pouted in disappointment like a child, but only for a second. When I was resting in my room, she quietly went to the local store and came back to make more dishes for me to taste. In the morning, she got up very early to cook more breakfast than what I could eat for three meals.

On my departure day, my father suggested he give me a ride to the bus station. Mother said she would. Later, my father wanted to come along, but there was no room on Mother's electric tricycle. As we were about to ride away, I heard “Hey!” from behind. My father was standing by the kitchen window waving his hand. I smiled and waved back, holding back my tears. My father does not express his feelings much, but whenever he does, he hits hard on my soft spot.

The Giving Tree
I thought this trip was my heroic journey home to help my parents, but apparently, they were still more capable of taking care of me than I was taking care of them.

I think of the poem by Shel Silverstein, The Giving Tree. The tree is happy to give everything to the boy, her fruits, her branches, and her trunk. At the end, when she has only a stump left, she is happy to offer a seat to the boy who now has grown old and tired. As children of Mothers, when can we learn to give back? As children of the Earth, when shall we stop taking so much?