Last week, we wrapped up our first Laddership Circle, and yet, as with all things that strike an inner chord, it feels like it’s only the beginning.

For six weeks, a small group of folks came together with an inkling to innovate in a different way. Each week, we held space for each other’s journeys in simple, through weekly assignments, reflections, practices, and a 90-minute group conversation that sparked an array of insights, stories, inspiration, and deeper resonance to be of service to each other and the world around us.

Through the process, we learned the power of small. Katie pointed out, “These small acts may be like pebbles we throw in the water, but their potential for transformation is enormous.” And Scott P asked, “Are than any transformations that aren’t incremental? Is there anything but small acts?”

We witnessed the expansiveness of gratitude. From Fran noticing the speed and ease with which she parks her car, and how much longer it would take her if she didn’t have the use of her legs, to Nicole accepting being taken over by a cold, to Mira’s cup-overflowing sense of stewardship for the landscape and art that rejuvenates her and many others on a daily basis.

We realized the wisdom of patience-- that the actual impact of our efforts may not fully bloom until four, five, or fifty generations later. But that we must keep walking, with trust and a conviction in these values with which we resonate so deeply to the core. As Scott M poetically likened these efforts to a raven he saw, building its nest slowly and intentionally, one twig at a time. In his Week 5 reflection, Calvin noted:

“I'm beginning to learn that I may have to have faith that in just taking the first step, the next steps will follow in a way aligned with my intention… changes to the system may be on a time scale that I have to be patient with… But you know, they might not happen at the scale I want them to even in my lifetime. At least I can help take small steps in that direction.”

And with these small steps, beautiful experiments emerged. Inspired by a resonance for unconditional love, Nicole led an invigorating Wild Dream Walk, named "Love Walk: No-Strings Attached," with a team of folks gifting hundreds of hugs, high-fives, as well as hand-warmers, flowers and handmade cards. City anonymity melted away as small acts of great love transformed strangers into friends across city streets of Colorado winter—a powerful renaissance of the human spirit. 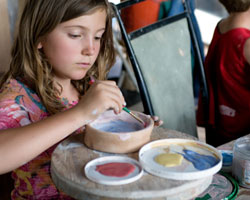 On that same day, Mira, a spirited artist who runs a pottery studio in Colorado, launched "Clay-it-Forward". Seeing herself as an instrument to share both her craft and the stunning landscape that surrounds her, she opened her studio for an afternoon of pottery, creativity, and nature—with no admission fee or expectation, simply a desire to experiment in giving. After the experience, she wrote:

There was a moment with a family whose members were first time visitors to the studio. I knew that the mother had seen my flyer because I had asked every one who came, to watch a video that explains the concept of the Gift Economy, before they arrived. But in the end I handed the father my bill for $0 and showed him the explanation of the Giving Economy on the bill. I was uncomfortable and felt I was stretching my limits and comfort zone.

After they left, my ego really flared. I wrote an email to the mom asking if they were comfortable when they left, and if I had surprised them by asking them to "clay-it-forward". She immediately responded with such compassion and joy and shared, "Mira, we were so blown away when we walked into the studio. We felt so much love, creativity and welcoming, that we were all overwhelmed by the experience. We had such fun and felt we couldn't give enough back for what we felt it was worth."

I then understood that even though my ego was flaring and I was very uncomfortable, it was worth jumping into an experiment that I feel so passionate and on fire about. A little discomfort was worth the love I felt by sharing such a huge idea. 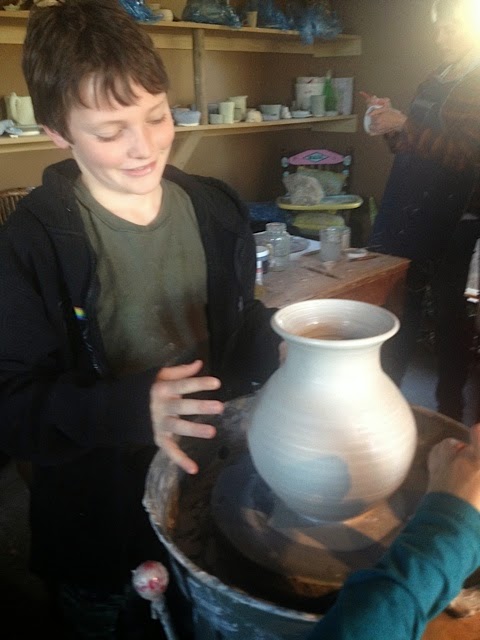 I think that stretching our comfort zones is a very tenuous situation for our made-up safety nets. The entire idea of the Giving Economy can be such a foreign concept to us, that a world in which we all give to one another is almost unfathomable. It is like saying we will land on the moon, or computers will exist 100 years ago. It could have never happened if no one envisioned these things. My daughter said to me the other day "Mom, when you were a child, didn't you die without computers and cell phones?" :) I guess we can't miss something that doesn't exist. But we can dream of a different planet and stretch our hearts and minds to imagine love and giving between all souls.

In our group call a couple weeks later, Mira found herself ignited by a new way to design for generosity: on her next Clay-It-Forward day, she’ll invite each child to make a piece of pottery for the child after them, in addition to making something for themselves. And so many other gems continue to percolate. Calvin’s Outpour App, has got us all excited to brighten another’s day with an anonymous positive message. Scott M continues to chart new territories with experiments in gift-economy tuition (via “Conscious Contribution Conversations”) at a school he co-founded, as well as in-the-moment ways of seeing and being throughout the day, like finding himself in an expansive conversation on life and death while doing his taxes. :)

Fran’s stories from both her own small acts of great love and classroom ripples are endless, as she gears up for her annual college Peace Conference. Among many gems, she reminds us that, “by staying in the inquiry of the question, I’ve always found the answer.”

With that deep sense of inquiry, Katie got us all “thinking globally and acting locally" with the most local of locations: our own thoughts and deeds. At her suggestion, a sub-group of us embarked on a recapitulation exercise for a week: each evening, we recounted the day’s events and became aware of areas that diverged from our values or intentions. She shares her own process: One day in the kitchen I broke a glass because I was multi-tasking and moving about the sink too fast. That night, I remembered it and how it doesn't reflect my values of being present and not doing multiple things at once (I think I was putting up dishes and pouring water in a glass at the same time). As part of the exercise, I also replayed the scene in my mind according to my values— so I got to re-do it and not break the glass. Since then, I have found myself to be much slower and more mindful in the kitchen, resisting the silly impulse to do one thing with the left hand and another with the right.

It's a simple example, but it's also played out in how I've been relating with people this week. In my recapitulations, I recognize some of the places I withhold generosity with others, and then I get the chance to address it in a different way the next day or next time I see them.

We also hosted a few breakout calls to brainstorm designs for various folks' projects. On our last call, when Scott P invited feedback for his eWisdomWorkshops (a program to teach high schoolers film and kindness), a group of us immediately volunteered to be a springboard for his ideas. Moving at the speed-of-love, a mix of folks from the ecosystem convened online just a few days later. It was beautiful to watch the brainstorm unfold. From ideas on starting each session with a few minutes of silence, to questions of how to get students to do a random act of kindness with a video camera, to skyping in a fellow participant to guest speak—we couldn't help but feel gratitude for how everyone came together for no reason other than to support one individual's journey. But in supporting his journey, we all grew in our own-- as we ended up holding space to share ideas, reflect on our values, and deepen ties together.

With such an unfolding at the surface, it’s always humbling to reflect on the many invisible hands whose selfless efforts till the soil in umpteen incalculable ways. Amidst a more than full-time work schedule, Birju dialed in to anchor the calls week-in and week-out. One week, he even managed to dial-in from the backseat of a car en route to a site visit for work. On top of that, over half a dozen folks designed the circle structure and curriculum, gracious mentors like Prasad and Pavi poured in their ideas and support, and remarkable tech wizards carved out multiple online spaces to engage more deeply. The beauty of such circles is that we never know exactly where the ripples go, but we simply sow seeds in the direction of our values and trust in the process. With the rich convictions of an ecosystem fueled by love, we can’t help but continue to take steps forward with hearts full and brimming on a path of possibility.