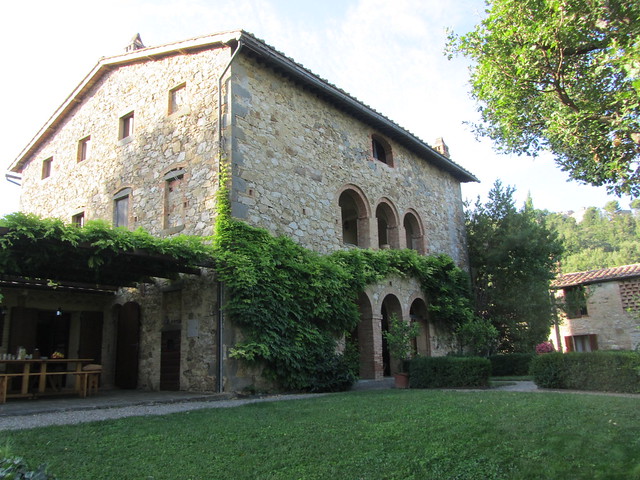 For the last five days, we found ourselves in rural Italy -- under the Tuscan sun. Before he passed away last year, Raimon Panikkar used to say: "The future is not in building a new tower of Babel, but in cultivating well trodden paths from house to house." Every year, he would host a "Sangama" -- a group of six to ten people, who spend five days together in a natureseque setting to hold roundtable dialogues on a particular topic. Meditating 3 times a day, having periods of silence and reflection, and doing chores around the property, all crafted a conducive environment for deepening.

This year, the Sangama was anchored by Brother David Steindl Rast, an 88 year old Benedictine monk who is most known for his Buddhist-Christian dialogue and a remarkable presence that has been cultivated through decades of rigorous meditation. (Rev. Heng Sure was translating a dialogue between his teacher Master Hua and Brother David, and at one point, Master Hua says: "I don't need any translation. I agree with everything he says.")  Our theme: Basic Global Ethic: Compassion?

Ethics is how we behave with our kin, but the notion of global ethic requires us to ask if we can expand our idea of kin to everyone on the globe. Similarly, there is a question around the nature of compassion and if it is a fundamental quality that can resonate across all boundaries. 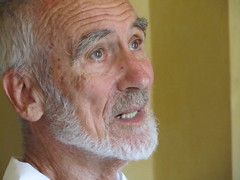 Brother David provided a great foundation to start us off: "Take the I and go back far enough until you watch the watcher. Let's call that Self. It is not material, nor in space or time. Yet we have the question: how is that Self related to the I, outside of watching?" For Brother David, this is coming from direct experience -- and he would argue that we all have moments of seeing that Self, even if we may not recognize it consciously.

Ego is what emerges when "I" forgets the Self. This creates fear, aggression, competition, greed. If we simply observe those negativities, they wither away since it lacks a firm foundation to stand on. Then, compassion arises as our natural state.

That disconnection -- between the I and the Self, the inner and the outer -- is the basis of our suffering. While pain is an inevitable part of growth, and the human experience, this kind of suffering is optional. In response, we see at least three kinds of action. Sympathy seems to stem from noticing the pain of others, empathy is about feeling the pain of others, and compassion is about serving others as if the pain was yours. 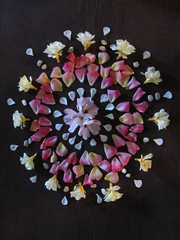 The do-gooder version of the Christian maxim often reads, "Love others like yourself," and appropriately elicits a sympathetic response. But a more accurate version reads, "Love others as yourself," which points to a compassionate response. Or as the Dalai Lama, a very close friend of Brother David over many decades, put it: "Suffering isn't overcome by leaving pain behind but rather by bearing the pain for others." C.S. Lewis similarly suggested that if we ever saw the people around us with true eyes, we would fall down in worship.

That compassion, stemming from an intention to include all beings as your kin and a clear understanding of the relationship between the Self and I -- what Rilke calls the "double realm" -- can be a global ethic.

Science has made a lot of progress in studying compassion, but its ultimate expression can only be in first-person experience. "A child experiences pain with a tooth cavity, while a scientist observes a detached tooth and tries to recreate those conditions. As soon as you have third person, it isn't the same thing. Mirror neurons, for instance, are a great discovery but it just can't tell the full story," Brother David said. 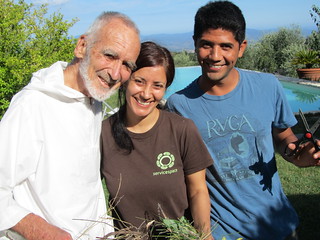 For global ethic of compassion to take root, then, a field of first-person experiences is a prerequisite. This is where Gandhi's famous "be the change" rings profoundly true. People who have awakened their compassion quotient. People like Raghu Makwane, who lost his legs to polio but found a way to connect with women in domestic violence situations by gifting them holy basil plants. Or people like Hajime Nishi, who runs 60 marathons a year, but adds, "In 1990, I realized that I did not want to run for competitive reasons, but to feel a connection with the environment." So now, when he runs, he picks up trash as he runs. In 2002, for instance, during a AAA marathon -- Himalayan 100 Race -- he picked up 25 kg of garbage during the 3 days. Or people like Richard Moore in Ireland, who not only forgave the soldier who blinded him for life, but befriended him.

Can we teach compassion? Or rather, can we create conditions for compassion to arise by itself? Tim Harrison at Emory has developed a Compassion Training Program that they are piloting around the country, including Emory's Medical School next semester. Similarly, Anthony Chavez (grand-son of Cesar Chavez), pondered how compassion would manifest in the realm of politics. Projects like Karma Kitchen and works & conversations magazine and Amdavad Rickshaw offer a way to cultivating gift relationship in the context of economic transactions. Katriona Munthe, a leading Jungian expert who helped uncover the remarkable Red Book, spoke about the intersection of joy and compassion -- in particular, theatre, flash mobs and art. The 21-Day Challenges at KindSpring also offer a great avenue to practice being the change. 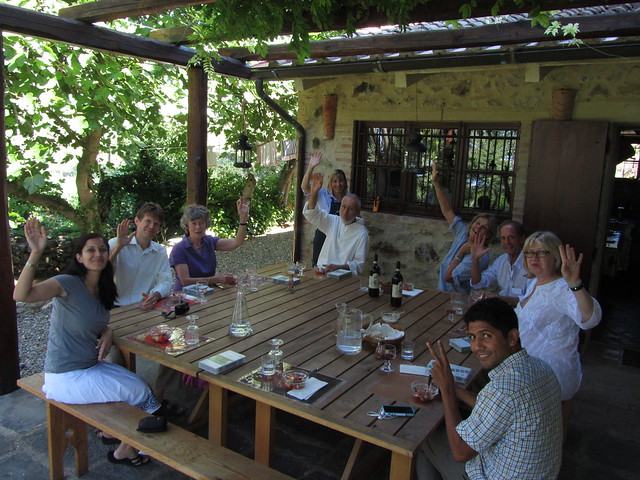 At one point, in our conversation, Brother David candidly raised the question: "So what do you suppose is the point of all this?" We suffer, we help, we stumble. Rinse, lather, repeat. That inquiry prompted a lively discussion that ended with Katriona laughing, "That was a trick question, wasn't it? There is no point." Kate Olson, from PBS's Religion and Ethics show, quickly prompted: "So if Brother David had to rewrite Rick Warren's Purpose-Driven Life, what would he call it?" Probably, 'Living a Grateful Life'. :) Purpose is rooted in the "I" and builds on the ego, while gratitude simply smiles at whatever-is from the realm of the 'Self'.

That, of course, doesn't mean we don't do anything. Desire comes from word de-sider-ium -- which Brother David explains as "hitching your cart to a star." Based on our past conditions, we each gravitate towards our star. That defines our unique work in the world. If we become aware of that work, become instruments of that call, and serve with compassion -- mission accomplished.