What if we lived in a world where the Golden Rule was the principle by which everyone lived…all the time….in all circumstances? “Do unto others as you would like others to do unto you.” Most of us learned some version of this rule as children and it was easy enough to apply back then.  But as we grew older, things became a little more complicated.

What if the interconnected, complex web of life is precisely why we should think about the welfare of others even more? This is something that John Fullerton began realizing while working as a Managing Director on Wall Street. With so many injustices and inequities, there had to be something that was off. Was there a way of reconciling the invisible hand of capitalism with the Golden Rule? On last Saturday’s Forest Call, John shared some possible answers to this heavy, yet very important question.

There is book called “Limits to Growth”, which addresses both the physical impossibility of exponential growth as well as the unjust distribution of wealth created by an economic system that tends to favor those with capital over those without it. After working from a profit maximizing perspective for over 18 years, reading " Limits to Growth” created a monumental shift for John.

“I discovered the ecosystem crisis in a way that I wasn’t looking for or expected. The assumption embedded in our modern economic model is that our natural resources are infinite. Because I was completely unaware of how the ecosystem worked or had any notion of finite limits on our planet, I thought of environmental issues as unconnected one-off problems.” 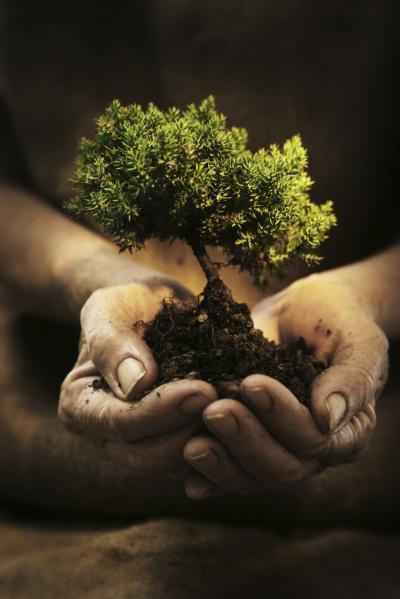 There was a disconcerting realization that much of what he believed to be true in our economically centered global system is built on an incorrect scientific foundation. More so, most of us have subconsciously bought into this system that allows us to look the other way. As John explained, if one accepts the science of climate change, then any consumer that utilizes his car or any investor that invests in fossil fuels is complicit in a system that is ethically unsupportable.

So is there a way to invest in our future without being destructive and causing even more harm to our ecosystem? In contrast to the current economic system, which profits the financiers at the expense of either social or natural capital, impact investment is not strictly focused on profit over a defined timeline. In fact, many impact investment ventures have no planned exit per se. John is a big proponent of looking to natural systems for answers when questions of future growth arise.

“The role that the oak tree plays in a mature forest is very different than the role of a weed in your garden.  In what we have termed the regenerative economy, mature companies look similar to mature oak trees. After reaching a certain point, oak trees stop growing physically but continue to grow in other ways.  The problem with publicly owned corporations that are not controlled by any one person move from CEO to CEO, each of whom come in with a five year plan to grow the business with no perspective of the role of that business within a mature ecosystem.”

After making the decision to leave Wall Street, John eventually founded the Capital Institute, an experimental solution for creating a more just and sustainable economic system that operates within the boundaries of the biosphere, by essentially following the laws of nature. The Capital Institute seeks to answer three questions:

Question 1:  What would an economic system that operates within the physical boundaries of the biosphere, while more equitably serving the needs of people, look like?

Question 2:  How must the practice of finance and the financial system itself evolve in order to fuel and sustain the transition to such an economic system?

Question 3:  What is the purpose of capital in such an economic system?

“I refer to capital investment as the bridge to the economy of the future. For example, at our partner company Armonia, we’re applying the methodology of holistic planned grazing to restore ranchland to their natural, healthy ecosystem. Large areas of grasslands in the United States and in other parts of the world that once held soil in place, and also stored water and carbon, have turned into barren deserts.  Partly, as the video demonstrates, we accomplish this by using cattle to mimic how the buffalo used to roam in the wild and indirectly build soil they walked on.”

Here are the before and after photos of land that received holistic treatment.

This example of impact investment certainly benefits our ecosystem, but in the end, isn’t it still a business enterprise, driven by profits?  How does this alternative financial model address inequities and unequal distributions of wealth?  We have to realize and understand that we are all contributors to the current system, in large or small ways.   So the hard fact is that everyone, not just investors, has to change their decisions and behaviors.  In addition to increased investment in enterprises that empower and serve the needs of humanity, John explained that what also becomes really important is what all of us do with profits and earnings.  We would have a much more sustainable economic model if financial capital was recycled into goods and services that are made from sustainable sources or have sustainable return. How can individuals become motivated to invest sustainably, or “recycle” their profits in a sustainable way?  Mindless consumerism is one of the biggest antidotes to symptoms like loneliness and boredom that have resulted from our modern, disconnected social structure. (It’s ironic to realize that the more disconnected we have become, the less we are able to grasp the underlying interconnectedness of our ecosystem.)  Would linking the threat of the two degree warming threshold with our national security suddenly motivate us to invest more ethically and live more responsibly? Perhaps a less cynical solution for systemic change would be grassroots movement building work, similar to Occupy Wall Street. Although one would argue that Occupy failed to present any specific alternative plan or solution, they were successful in awakening the consciousness of so many in the United States and around the world.

“There is a revolution that needs to happen. I don’t mean that in a conflict sort of way, but there is a need to shift our core belief system, and I believe that only happens through numerous grassroots movements that build from the bottom up and that someday join in a chorus and get heard by the people running the world, the political and financial elites.”

Right now, even though our voice is invisible and the debate that we hear is, “How do we generate GDP growth?” there are some hopeful signs. A friend of John's committed to this work and aware of these issues gave him a book by Prince Charles titled “The Prince’s Speech: On the Future of Food”.

Prince Charles is committed to using his unique platform to raise awareness.  Although John has never spoken with the Prince, his guess is that he finds this a monumental, almost impossible task.  But Prince Charles does have a pretty interesting platform for being a change agent.

It’s everything from you and and people like John Fullerton to Prince Charles raising awareness and trying to live by the Golden Rule.  And the next generation is already steps ahead of us in addressing these issues.


“One of the most hopeful things I see is that my children’s generation doesn’t need to be told any of this stuff that I’m trying to figure out.  They are already trying to work in a different paradigm than the one that operates in the world. I think our task is to be humble and do what we can to support and assist this young generation and then get out of the way to let them do their work.”

Karuna News: Karuna News: Uncommon Connections Newest issue of our newsletter is out!Oftentimes, we don't plan to meet the people who ... Read more

Mar 07: Susan Starkey on 'Mark Dubois: The Little Tree': "Mark’s story is so meaningful to me today, as...

Mar 06: Shyam Gupta on 'A Bibliophile's Spiritual Journey': "Concept of Gita has been very beautifully...

Mar 05: Hotstar deals on 'The Extra "Ordinariness" of Wednesdays': "Thanks for sharing this amazing website....

Mar 04: EricVBailey on 'Mother Teresa and Dan Rather on Listening': "*thumb_up_emoji*